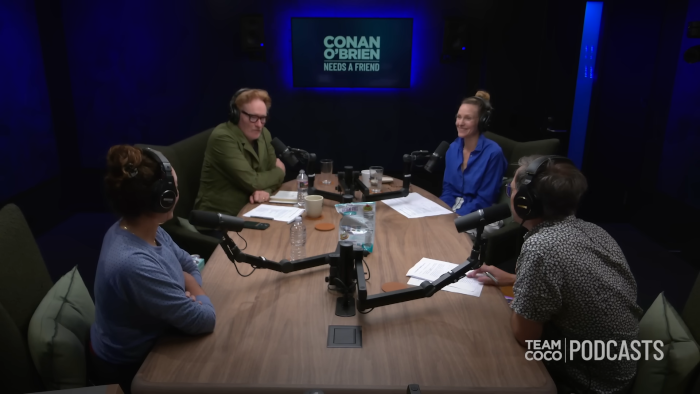 Liza Powel O’Brien is a playwright, copywriter, and now a podcast host. Her new podcast, Significant Others, explores what it was like to be the significant other of someone famous. What was it like dating Abraham Lincoln? Did Dr. Benjamin Spock know everything about raising a family (Spoiler alert: Spock believed all babies should sleep on their stomachs, which significantly increased the odds of Sudden Infant Death Syndrome sooooo…)? Being the partner or significant other to someone famous isn’t always what it’s cracked up to be. Liza should know.

Liza’s husband is some former SNL writer and ugh, Harvard grad (rolls eyes), Conan O’Brien. O’Brien has managed to make something of a name for himself, both on television and in the podcast space. He’s no Mahatma Gandhi. That said, don’t ask him if he is similar to Gandhi, as the answer will be in the affirmative.

The pitch for Liza’s podcast is enticing, and the cast she has lined up is stellar. Nick Offerman, Megan Mullally, Lisa Kudrow, Paul F. Tompkins, and many more lend their voices to the show. Even Conan’s producer and podcast legend in his own right Matt Gourley lends his vocal talents. Liza seeks to dig into what makes these figures and their relationships complex. It’s not just about who was secretly a jerk, though that is a part of it as well.

On a sincere note, it’s lovely to see Liza and Conan interact in this space. She seems to be a perfect, friendly, calm balance to his manic, “always on” kind of behavior. You can also just tell he loves and respects her, and dammit, I love to see that.

Significant Others is available wherever you get your podcasts.

← There's No Crying In The 'A League Of Their Own' Trailer | Review: 'The World's Worst Assistant' by Conan O'Brien's Assistant, Sona Movsesian →