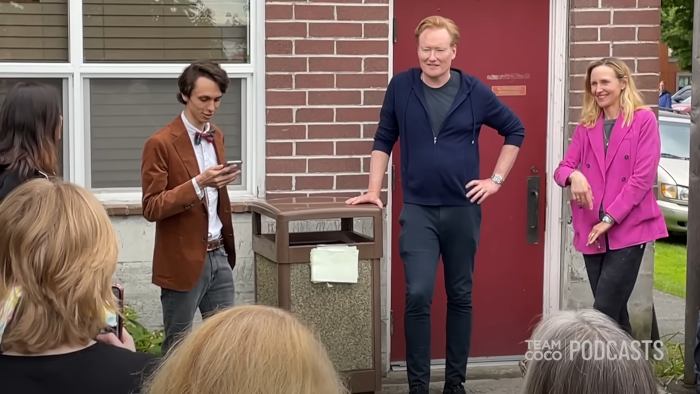 Conan O’Brien is kind of a big deal. The comedian has written for such institutions as Saturday Night Live and The Simpsons. He spent almost thirty years as a late-night talk show host. His podcast, Conan O’Brien Needs A Friend is so popular it was purchased by Sirius for $150 million. The man is a legend. It only makes sense that a small, island town would go out of their way to honor him in the most significant way possible: by naming a trashcan after him.

Conan was visiting Whidbey Island, where a play his wife Liza wrote was being put on. He was quickly greeted by the Police Chief. The Chief then offered to introduce O’Brien to the Mayor. The next thing he knows, residents are putting on a small ceremony for him. They celebrate his arrival with the dedication of a small trashcan now known as The Conan Can. You can tell that Conan is tickled by the whole experience.

A joke though it may be, the trashcan dedication is the best possible scenario. In another world, Conan could have found himself in a Wicker Man-type scenario. A small, island town, welcomes Conan with strange enthusiasm, only to burn him alive to ensure a ripe harvest. I don’t want that to happen! I’m just saying that ole Coco needs to be careful. You never know when you’re gonna get Wicker Man’d!

Conan was not burned alive. He was subjected to an even greater torment: teenage humiliation. While riding the high of his trashcan dedication, Conan was greeted by two teenagers and managed to embarrass himself thoroughly. I’ll leave the “how” of that situation for him to explain, but prepare to cringe.