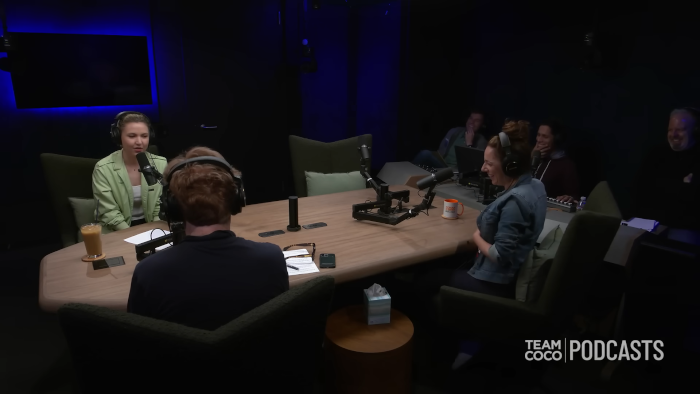 The early days of podcasting were like the Wild Wild West. Anything went! People were drinking, clinking glasses, and coughing directly into the mic. It was chaos. Beautiful, sweet chaos. Now, with podcasts being sold for hundreds of millions of dollars, things have to be a bit more serious. In a recent episode of Conan O’Brien Needs A Friend the guest, hilarious comedian Taylor Tomlinson, had her iced coffee carted away for making too much noise!

First, if you are not familiar with Taylor Tomlinson, do yourself a favor and go watch any clip of her you can find. Her Netflix specials, Quarter-Life Crisis and Look At You, are top to bottom hilarious. Even if Netflix is doubling down on its shitiness as of late. Taylor is part of the future of stand-up comedy, and the future looks bright!

Here, she gets into some fairly serious subject matter. She discusses her mom, who passed when Taylor was eight years old. It is a solemn, reflective moment that is followed immediately by producer Adam Sachs walking over and moving her iced coffee away from her. This moment was funny enough when listening to the podcast. Seeing it on video is even better. With Conan’s new studio, it’s now easy to see just how much goes on when producing his show.

The podcast world has changed (ya know, in $150 million studios). There will be no more errant noise! All will be silent before the great Coco!

← Viola Davis Plays a Real-Life Warrior in the Trailer for Gina Prince-Bythewood's 'The Woman King' | How Does 'The Boys,' 'Ms. Marvel,' and 'Obi Wan' Rank Against the Dominant Netflix Programming? →