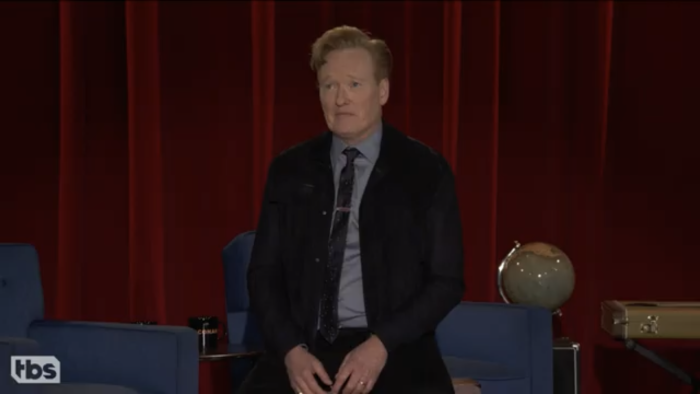 It’s been over 12 hours since I watched Conan O’Brien in his final show as a late-night talk show host and I’m still coming to terms with it. I’ve spent two-thirds of my life knowing I was a fan of his (and at least five where I was but didn’t know it, thank you The Simpsons). Conan’s career has been impressive and his impact on the late-night landscape, as well as countless writers and comedians, is indelible. When I sat down to witness him do what he does best for the last time, I was a mix of nerves, sadness, and excitement. To the surprise of no one, Conan did not disappoint.

Things started with an appearance by Homer Simpson, which I covered here, and then another famous comedian made his third appearance on Conan’s third “last show.” Will Ferrell, who is currently shooting a movie in Boston, insisted on being there for Conan yet again, distance be damned. His appearance was via Zoom and, even though I have a slight suspicion that it was recorded in advance (though I can’t fault them if it was), it was a classic back and forth between Ferrell and O’Brien. They play off of each other so well that it was a true treat to witness it one last time (or not, as the bit implies).

Like most of the internet community, Conan couldn’t resist going over his greatest hits from his TBS years. It’s really a bummer that Conan’s NBC work could not, for obvious reasons, be shown. However, that surely would have made the episode several hours longer. Instead, we were treated to an assemblage of clips that showcased both how much of a late-night icon O’Brien is and how much freedom TBS truly gave him. Extra attention deserves to be paid to Conan’s time abroad in his Conan Without Borders episodes, all of which are available on HBO Max by the way!

Jack Black ended up being a perfect last guest to send Conan off into the proverbial sunset. He was SO excited that he actually hurt himself during a rehearsal for the show. The day before no less! Seriously, Black is out there in a walking cast because he twisted his ankle while rehearsing. AND YET, he still manages to bring all the energy and comedic chops you would expect from Jack Black. It felt like Conan picked someone with whom he could just sit back and laugh. The Orange County star surely fit that bill.

Now for the real emotional stuff. First, and I’m bummed I can’t find this clip anywhere, Conan saluted his assistant and, in my opinion, secret weapon: Sona Movsesian. Sona has blossomed into a star of her own right over the years. Her chemistry with Conan, her ability to tell him about himself when necessary, her presence as a whole has been a true blessing and one of the best things to come out of the TBS years (I know, she joined him during the brief The Tonight Show tenure, but still). Conan began talking about Sona, thinking she wasn’t there because any day now she will give birth to twin boys, and then it was revealed she was there! And she was crying! And then I started crying!

“That’s why you’re being so nice,” Sona yelled at Conan, when he revealed he didn’t know she was in attendance. It was an incredibly sweet moment. They have a contentious (yet playful) relationship on screen/on the podcast, but it’s clear that they care deeply for each other. There is palpable mentor/protégé energy, even a father/daughter type relationship. It’s encouraging that they’ve both said their personal and professional relationship will continue. Until we see what that gives us next, here is my favorite Conan/Sona sketch from the TBS days.

Finally, Conan’s farewell speech. I legitimately feel that it will go down in TV history as one of the best ever. It was packed with so much gratitude, so much love. Also, Conan didn’t try to revel in it. He didn’t spend the whole time patting himself on the back, he thanked the people who helped make his journey possible. He showed humility in a way that not many people in his position would be able to. I fully acknowledge that my bias may be showing here. Conan is the first late-night talk show host I ever felt a connection to. But dammit, he stuck this landing like a pro.

Television will not be the same without Conan O’Brien. The future of late night is a bright one, but it is changing rapidly. Conan’s exit is further proof of just how big that change is. An era has ended and the landscape is forever different. Raise a glass, give a salute or a toast or a moment of silence for one of the best to ever sit behind a desk and tell jokes. Conan’s time in late-night has ended, but his time making us laugh is far from over.

← Review: 'F9' Has Entered the Tyson Zone and Nothing Matters Anymore | Everything I Love Turns 30 This Year →