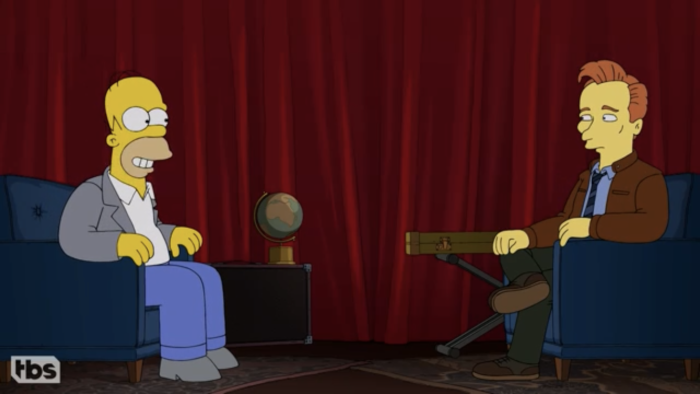 Conan’s career as a late-night talk show host has come to an end. The night was full of fond memories, gut-busting laughs, and confirmation from Will Ferrell that Batman’s mouth isn’t covered by his mask for a reason. To kick things off, Conan was given an exit interview from none other than Homer Simpson.

Conan was animated, albeit not in the way I remember him most fondly:

As a former writer on The Simpsons, Conan’s appearance alongside America’s Favorite Yellow Dad is extra special. You can hear the emotion in Conan’s voice. His animated self talks about how much Homer means to him. Heck, he even tries to make a connection with him at the end! It’s very sweet. Even if Homer is cracking jokes at Conan’s expense the entire time.

When this happened I was in trouble. It was the opening of the show, pre theme song, and already I was gettin’ all misty-eyed. I’m someone who is not ashamed to cry, but dammit, I thought I’d at least make it to the end before I started. I was wrong … several more times.

This was an absolutely beautiful way to kick off the show. It helped show how vast Conan’s career has been. Since we certainly weren’t going to get anything from his NBC days (for obvious reasons), it was a delight to get a look at another important part of Conan’s life. The Simpsons will forever be tied to O’Brien, and vice versa. But still, this moment worked as a wonderful end to a chapter in the book of Conan.

← The CW Greenlit a 'Supernatural' Prequel, And Then It Got Messy | Jean Smart Lost Her Husband of 44 Years During the Shoot for 'Hacks' →