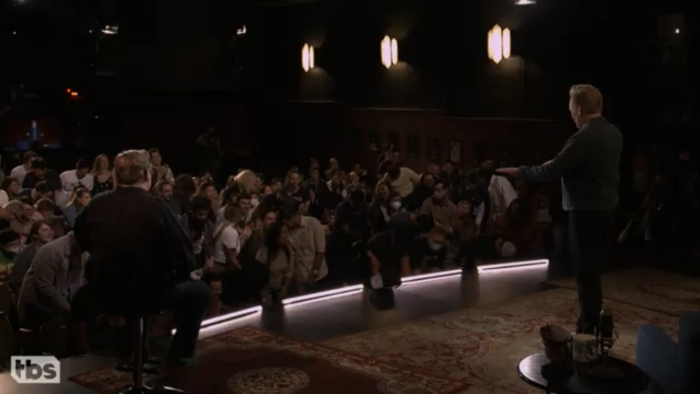 Countless People Show Love To Conan On His Last Day

It’s heartwarming to see the kind of love O’Brien is receiving. Not everyone has the luxury of leaving on such a high note. Some people, when they are finishing a chapter in their showbiz lives, fall away into obscurity. Not a word would be said nor a tear would be shed. That is not the case for Conan O’Brien and his late-night escapades. Conan’s is a legacy that will live on for years to come. Yes, he has another show lined up. He still has his podcast. Conan is not disappearing into an empty void. He’s just wrapping up a very significant era of his career.

Conan O’Brien is a champion for comedy, even outside of the talk show realm. Recently he’s begun lifting up the voices of people like Nicole Byer and JB Smoove in the podcast space. It’s safe to assume that whatever Conan does next, he will continue to support funny people doing funny things. Several years from now, we may be greeted with even more stories from legendary performers about how they got their start on Conan’s new show. It is a tradition I look forward to with unfettered glee.

It’s not just that Conan was a champion for comedy, either. It’s that he promoted comics who may not have gotten a push otherwise. Newer, “alternative” comics who were maybe considered not mainstream enough to get on other shows were often given the green light by Conan.

Here is just a taste of the congrats from all across the comedic spectrum. A showing of the love that Conan has received. Love that he very much deserves.

I was at SNL when @ConanOBrien was a writer and when Lorne said he was going to give Late Night to Conan, every one of us said "Great. He's the funniest person I know."
Congrats to all my friends at @TeamCoco on an incredible run.

One time in 2003 I skipped school and went to a taping of Late Night with Conan O’Brien. Seeing all the people working behind the scenes made me realize that more than anything I wanted to work in late night television. What I’m saying is he ruined my life.

An end of an era. We're going to miss sharing Monday nights with you @ConanOBrien! 🧡@TeamCoco
#AmericanDad #Conan pic.twitter.com/MAjeabrsPv

In my humble opinion, this is still one of the funniest things that's ever been on TV. @TeamCoco @ConanOBrien https://t.co/7NkNJrVvXQ

Tonight, two men I respect tremendously close a chapter of their brilliant careers. Conan made doing his job the hard way look easy. He & Andy are among the funniest of the many funny people I’ve met. Congratulations to you & your co-workers on a remarkable achievement.

You will not be surprised to find out that I laughed hard, every day, for almost eleven years. What a talented bunch of weirdos. pic.twitter.com/Y8QVBSHiPj

Honestly words cannot describe how cool it’s been to be a very very small part of that’s been making the most incredible comedy for my whole life. When I told the boss this is the best job I’ve ever had he said “You’ve probably only had like 5 jobs so that means almost nothing.” pic.twitter.com/fX78fSqwdz

There isn't a show or a host that comes close and that has been kinder to comedy than Conan. @TeamCoco Thankyou for giving me my first shot on American TV, for having me back, and for always being amazing, kind and funny! Good luck to you and the team! pic.twitter.com/d8UXj7UaJW

Goodbye #CONAN thanks for giving this dumb bitch two chances of a lifetime pic.twitter.com/YdDceU81rT

← Why the Fight for Britney Spears's Reproductive Freedom Matters | Review: Fresh But Flawed 'Catch the Fair One' Presents a Brutal Take on Revenge Tropes →