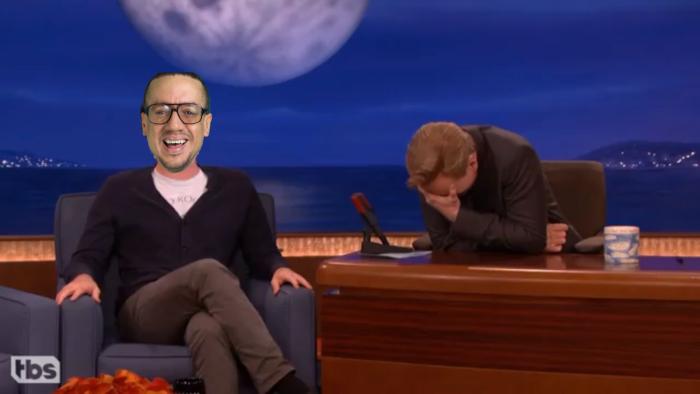 “Our next guest is a very funny man, put your hands together for Andrew Sanford! Andrew Sanford, everybody!” That’s how it would begin. Conan would call me out, and I would emerge, likely to The StreetBeater by Quincy Jones (a blessing/curse for anyone with my last name). I’d head over to the couch, shake his hand and do the string dance just a little. Not too much, I want to show I’m a fan but not an annoying one. I would sit there and Conan and I wouldn’t even be able to get to my upcoming projects. We’d just be talking in a casual, fun way. Me making him laugh until he finally ends the interview, red-faced with hysterics. That was the dream and now that dream will never come true.

Conan O’Brien will take his final bow as a late-night host Thursday, June 24th. It’s been an amazing run that has lasted almost thirty years. His time on-air has been filled with zany characters, phenomenal interviews, journeys to foreign lands, and hilarious sketches. From NBC to TBS, Conan’s was a show that appealed to a … weirder crowd. I say weird with nothing but love. I’m weird. My favorite people are weird. Weird is great and honestly, growing up with Conan helped give me that mindset.

My first introduction to Conan was at a time when I did not know who he was. As with most things in my life, I was introduced to Conan through The Simpsons. No, not as a writer, I was too young to start recognizing things like that. I mean Season five, Episode 12: Bart Gets Famous. In short: Bart becomes Krusty’s sidekick, hilarity ensues. At one point during his brief date with fame, Bart is a guest on Conan’s talk show (before he knew he would have the job but after he interviewed for it). I saw this man with shocking red hair, who looked like a new, recurring Simpsons character and knew for certain that he wasn’t real. I was convinced. Until November 21st, 2002.

It was on November 21st, 2002 when, due to my love of The Simpsons, I decided to watch a TV show set to feature actors Dan Castellaneta and Harry Shearer as guests. Lo and behold, that show was Late Night with Conan O’Brien, which was now running 7 PM reruns on Comedy Central the day after initially airing. I say this with zero sarcasm or snark but, enjoy your YouTube, people; it’s amazing and terrible that you can watch whatever you want, whenever you want (within reason). When I saw O’Brien, the talk show host from The Simpsons, my mind was blown. He was a Simpsons character come to life. I was hooked.

From that day forward, Conan O’Brien became an icon in my mind. I watched his show every day at 7 PM without fail. I wasn’t old enough to stay up until 12:35 on a school night. Though, soon enough, I would do so regardless. My math grades suffered. I was hooked, that’s all there is to it. Not just to Conan but now to the late-night talk show format. He opened my eyes to what that type of show could be. It didn’t have to be stuffy or boring or take itself too seriously. Conan had fun. I wanted to have fun.

Around that time I was developing my interest in theater, specifically acting. As my wife says very encouragingly, I can “carry a tune” but I’m no singer. I love acting and making people laugh, and I was beginning to find that I was pretty good at both. I was convinced that my talents would one day earn me a spot on the couch next to Conan, making him laugh. I even moved to NYC when I turned 18, went to a theater conservatory, and by 19 I was loose in the city, auditioning while working a lousy bartending job and … I hated it.

It wasn’t the job either. It sucked, sure, but I made a lot of great, longtime friends at that job. It was the auditioning. I wanted more instant results. I didn’t want to have to prove myself with nothing but a quick monologue or sides (arrogance is strong when you’ve just turned 20). Since I liked making people laugh, I moved into the stand-up scene. It was my next stepping stone. My new dream. Not only would I do my stand-up on Conan, but he’d call me to the couch afterward. Then I’d come back to promote the movies that I got to make because I was such a good stand-up. But that was the problem; the stand-up was never about the stand-up. It was a means to an end and that end wasn’t comedy. So I moved on.

Almost ten years ago, I decided to work primarily as a writer. I’ve always enjoyed telling stories and this was the next, best way. It started in comics, where I wrote a published graphic novel. That led to spec scripts, screenplays, competitions, showcases, Shakespearean adaptations of popular movies, and writing about Conan for this wonderful website. I’ve been busy. Writing is my passion, but, of course, is still a way to get on Conan. I’m still a performer, too! I’ve even been on TV, hunting … bigfoot (seriously). It only made sense that I would one day make my dream come true. I just needed some big success.

Make no mistake, I’ve been successful, in my writing and in life. I’m married to an amazing woman, I’ve had shows produced in NYC, I’m a new father to twin boys, I’ve been bought a drink by someone who exclaimed, “This is on [Famous Director]’s tab” as they made their way to the bathroom, only to ghost me after that meeting in true, Hollywood fashion. Things have been good. But, evidently not “Conan Good.” However, my will remained strong. I knew that someday my dream would still come true. Then, in May of this year, this happened.

Conan announces the final episode of #CONAN will air on June 24th. Tune in over the next two months for special guests and a look back at the past 11 years! pic.twitter.com/saOKwIRg3y

Conan announced that he was ending his show. For my dream to come true, I would need to become famous by June. *Ron Howard voice* He did not. Before you say it, of course I know about Mr. O’Brien’s amazing podcast, Conan O’Brien Needs A Friend. It’s not the same. There’s no curtain to walk through, no Vivino or Weinberg to play StreetBeater; it’s not my dream. In fact, my “dream” is gone. It didn’t really hit me until this last week when I vocalized it to my wife. Something I sought after so passionately would no longer be possible.

I’ve been through this before. I’ve wanted an Oscar, my own hour-long special on Comedy Central, a chance to write an epic Aquaman run at DC Comics. All of those things fell away as my career, and my focus shifted. Just like a tall, redheaded funnyman I grew up idolizing. Conan went from SNL writer to Simpsons writer, to talk show host, to podcaster, to international sex symbol. He has moved and string-danced all through his life and come out the other end with a smile on his face. Our lives may look different, but one thing is the same: we’re both happy with the way things have turned out.

It makes me sad, of course, to know I will never sit next to Conan and tell a hilarious anecdote about how my favorite karaoke song choice is The Humpty Dance. But I know that things change. Like Conan, everything I’ve been through has gotten me to where I am, and one of those things is now knowing that a dream of mine is no longer on the table. Here’s the thing though: I like where I am. I wouldn’t do anything to change it, and that includes tying Conan to his late-night desk and forcing him to do his show for another ten years (or until I become successful enough to be a guest, whichever comes first). I will never be interviewed by Conan O’Brien. That’s just the way that it is.

← Honest Trailers Takes on the original 'The Fast and the Furious' | Is 'Grey's Anatomy' Ending After Next Season? →