Bill Hader Owes His Career To Megan Mullally, And Other Fun Facts About Both Comedy Stars

Are you in search of podcasts full of fun and wild information? Then check out In Bed With Nick and Megan. This Earwolf production has Hollywood’s most quirky while hot power couple, Megan Mullally and Nick Offerman, play co-hosts as they welcome their celebrity buddies into their bed to talk about whatever tickles their fancy. In the first episode, they fittingly talked about “firsts” with Bill Hader, and the three of them told the story of how the comedy star was discovered … by Megan Mullally.

“It was the fall of 2004,” Hader recalled. At the time, Mullally and Offerman had already been together a few years, and they were headed to an improv show at Los Angeles’ Second City theater to support his brother, Matt Offerman, in his showcase performance. Mullally recalls the first couple of sketches were solid. “And then, all I can say is this superstar with a giant beam of light shining on him walked onto the stage. Of course, there was no actual beam of light that was just your aura! Like Eleanor Aduza! You walked onto the stage and just proceeded to blow everyone’s minds…He did impersonations.”

“He did physical comedy. He did everything,” Mullally recounted. “And our jaws were on the floor!”

Offerman specifically remembers that first sketch, “It was James Mason in a donut shop” with an expired coupon for a dozen donuts. Later in the ep, Hader—15 years later—revives the bit, and it’s hysterical.

After the show, “everyone adjourned to Canter’s Deli,” Mullally continued, and there she approached Hader and asked, “Would it be weird if I called Lorne Michaels about you?”

Now. Let’s take a step back to imagine what this was like for Bill Hader. At the time, he had no agent or manager. He’d been working small jobs around LA like production assistant on movies and as an assistant editor on Iron Chef America. “We actually had footage of Bobby Flay electrocuting himself,” Hader said of his time on the cooking competition show, “And I was like, ‘This is the best it’s ever going to get.’” So, Hader goes to his level 5 graduation performance for Second City, maybe he’s feeling good about how it went. Then, four-time Emmy nominated Will & Grace star Megan Mullally approaches him and asks if she can tell Saturday Night Live impresario Lorne Michaels about him. Shocked, he accepted.

“I was in my edit bay at Iron Chef America,” Hader continued, “And I got a call from you saying, ‘Hi. This is Megan, I’m Matt’s sister-in-law.’ And I’m like, ‘I know who you are!’” Mullally told Hader he should expect a call from Michael’s office. “He might want to meet you.” Meanwhile, “I had this editor who was mad at me because I’d arranged his project the way he didn’t want it arranged, so I was just looking at him, and he’s going, ‘Get off your phone!’”

From there, Lindsay Shookus, who was an assistant in the talent department before she went on to run it (and date Ben Affleck), called to set up the meeting. Saturday Night Live flew Hader from LA to New York to meet Lorne Michaels. While “as green as green could be,” Hader had an ace in his pocket, thanks to Mullally. She’d called SNL alum Molly Shannon to give Hader some advice. Shannon warned Hader not to preform. “Don’t try to be funny. He loves books and movies,” Shannon shared, “Don’t go in there trying to do an audition. Just be yourself, and he’ll respect that.”

Hader’s meeting with Michaels was brief and odd. He was asked which era of the show was his favorite (Dana Carvey and Phil Hartman’s). Then Michaels told this story, “You know I was on a boat once, aaaaand there was a guy on the boat the way that way that Bill Murray is funny. And I thought to myself, ‘I know Bill Murray.’” That was it. That was the story. Then, Michaels suggested Hader come to that weeks’ show. He did.

Hader claims you can see him in the opening monologue of the Topher Grace episode as Jason Sudeikis, who was a writer on the show at the time, asks a question. Hader is in the background, standing and wearing a visitor’s badge.

I was going to post the video and tell you to watch for Hader! But here’s what the video looks like: 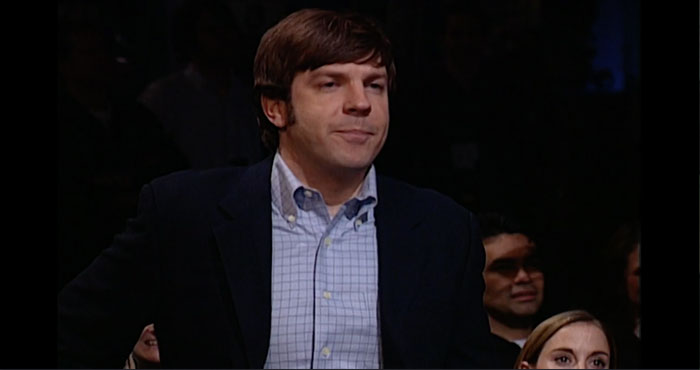 So, I applied my Photoshop knowledge (accrued from my time as an assistant editor!), and…there he is? 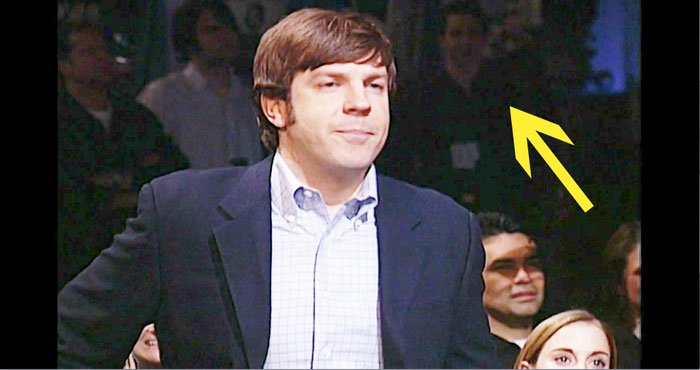 The rest, as they say, is history. Hader joined Saturday Night Live in Season 31, along with Andy Samberg. This made Mullally annoyed at Samberg and his success for a while because she felt protective of Hader and wanted him to be showcased. Then, the pair started working together, like with “Laser Cats,” and it all worked out.

But that’s not all! “First with Bill Hader” also reveals random fun facts and anecdotes like:

*Before she was on The Good Place, D’Arcy Carden worked as a nanny for Bill Hader’s kids! He offered her a part in Barry the same month she landed the role of Janet.

*Mullally auditioned for The Breakfast Club. She had “three or four callbacks” for Claire Standish, the role that ultimately went to Molly Ringwald. Of one of those auditions, she says, “I had to put lipstick on with my boobs.”

*In a story that sounds like a Hollywood legend, Mullally got a role in Blue Velvet because David Lynch spotted her at a restaurant. She landed the role of Kyle MacLachlan’s bitchy girlfriend. What? You don’t remember her? Yeah. She was cut from the final film, never told, and was not invited to the premiere. So, she found out when she took her boyfriend to see the movie in theaters. Ouch.

*Hader’s been cut from a movie without warning too. When working as a production assistant on Arnold Schwarzenegger’s Collateral Damage, he got bumped to featured extra because he was roughly the same size as an MIA actor. In a scene with Elias Koteas, he even got a line! However, during the cast and crew screening, Hader discovered his would-be first screen appearance was cut, much to the amusement of his fellow crew members.

*Offerman also shares the inside scoop on his Deadwood appearance and his nude scene, which he’d forgotten to mention to Mullally until right before it aired. 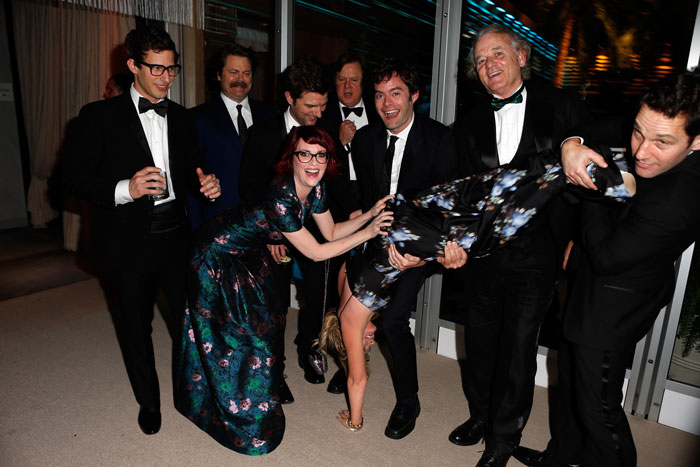 Listen to In Bed With Nick and Megan here or wherever you find podcasts.