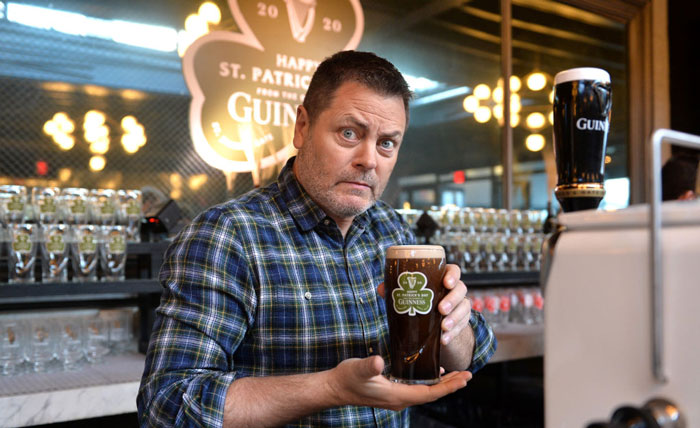 Nick Offerman is hot. It is known. We crushed on him as the gruff love meatloaf Ron Swanson on Parks and Recreation. We swooned for him as a beacon of non-toxic masculinity and the crafting woman’s sex symbol on Making It. Now, prepare to thirst for him as he gets silly for Guinness.

Warning: this clip is not NSFW. But your body may not be ready for the surreal sexiness of Nick Offerman wearing a shamrock onesie while operating a crowbar.

This 15-second spot hit me on Hulu last night, I was genuinely awed at its smoke-showiness. I did not know that Onesie Offerman was a thing I needed in my life and lust banks, but here we are. And so, I went down the rabbit hole, thirsting for more.

I found this, which made me jealous of every featured extra who got to share a fake photo booth with Nick Offerman and the promotional swag he seems to have snatched from a frat bro.

Do you think he smells good? I bet he does. Conan O’Brien described his smell as “manly” back when Offerman was included in People’s Sexiest Man Alive issue. This chestnut stallion was kind enough to share the secret of his savory scent. Naturally, it’s DIY. BUT BE WARNED: there is a striptease below that may be NSFW because it involves a lot of nipples. Like. A lot.

He’d definitely share deep wisdoms about rapping and stories about wagon tongues, which are apparently a thing.

Maybe he’d make you pancakes while sporting a denim apron.

Or maybe, if you’re lucky he’d dance for you.

i do this because i love you (sound up, please)

Or sing for you.

Or do his civic duty, while wearing a Spice Girls t-shirt.

I wanted to be a winner so I geared up and went to Pawnee to vote#VoteWarren pic.twitter.com/ii83TJtkcm

Or maybe he’d engage in a heated (and hot) pun-off!

I mean, goddamn! THAT is a man!

← Elizabeth Warren is Dropping Out | Thanks to Climate Change, the Amazon Rainforest Could Soon Turn Into a Source of CO2 →