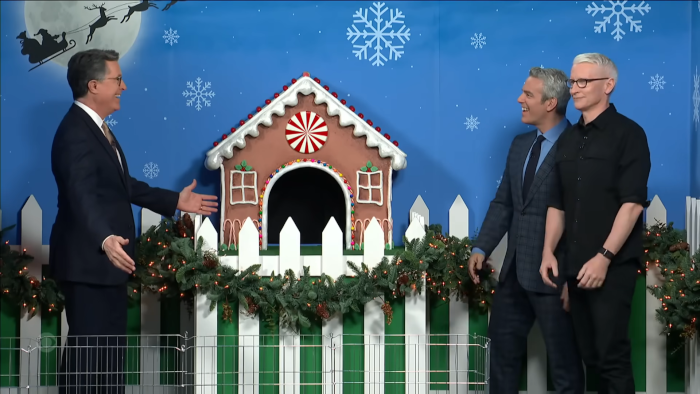 The year is almost at an end. From this point on, I want good vibes only. No tech-bro wannabe dictators or unceremoniously removed Supermen. From here on out, it’s nothing but Barbie, Avatar (I’m excited), another new Weezer album (the fourth this year), and Anderson Cooper reacting lovingly to rescue dogs. Cooper and New Years’ cohort Andy Cohen dropped by The Late Show with Stephen Colbert to help rescue dogs get adopted, and Cooper’s mood is how I want to spend the rest of the year.

Colbert has helped dogs find owners before. He begins the segment by bragging about the show’s impressive hundred percent adoption rate. Cohen and Cooper arrive to help lie about the dogs in hopes of getting them into new homes. It’s funny and supports a good cause. What else could you ask for?

A true highlight is how excited Cooper is to see the dogs. Even though Cohen gets handed one first, Cooper immediately reaches out to pet it. He can’t help himself, and I fully understand. When he is finally given a pup of his own, he pets and kisses it with gleeful enthusiasm. It is heartwarming.

All that to say, I would like to speak to whoever dressed Cohen for this segment. Mistakes happen. The backstage machinations of a show like this are hectic at best. However, the shirt Cohen is wearing is almost the exact shade of blue as the stage background. It was distracting me from the cute dogs, dagnabbit!


← David Beckham Responds to Joe Lycett Over His Involvement in 2022 Qatar World Cup | Prime Video's 'El Presidente' Is a Fun, Meta-take on Scorsese and FIFA-gate →