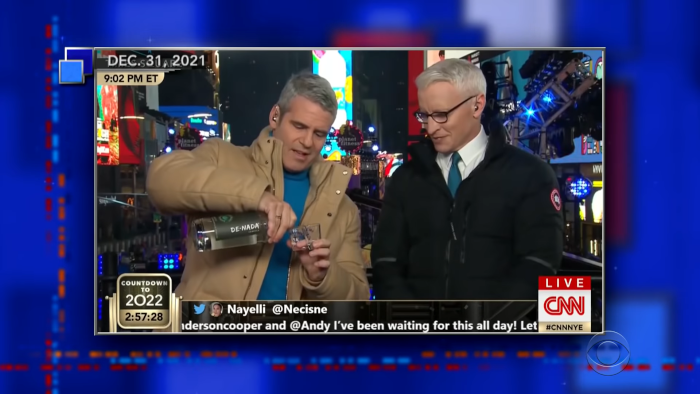 Sometimes people drink too much. It happens. Whether you’re celebrating, mourning, or locked inside of your own apartment for fear of a deadly pandemic. To quote a great man, alcohol is “the cause of, and solution to, all of life’s problems.” This year, on CNN’s New Year’s Eve celebration (which is apparently a thing), TV Personality Andy Cohen had a little too much tequila and decided to let loose on national television. It was messy. He delivered a masterful rant about former Mayor DiBlasio, and he even called out Ryan Seacrest (apparently, his only regret).

Several late-night hosts took shots at Cohen for his drunken rants, but no one did it with the same comedic precision as Stephen Colbert. Colbert’s a nice guy and no stranger to drinking on TV, but he quickly gets at the heart of Andy’s excuse for his tipsiness. Cohen may have been “overserved” as he said, but Stephen was quick to point out that the fellow talk show host was the one doing the serving!

Colbert delivers the punchline with clip after clip of Cohen pouring his own drinks. It is truly the best kind of jab because Stephen’s not saying anything that isn’t true. There’s almost a “gotcha” element to it. Colbert isn’t mean or cruel with the joke, he’s actually quite giddy. But it is a burn that would make Eowyn blush. It’s also a real testament to the power of editing.

Before you watch the video, keep an eye out for how much Andy is pouring himself to drink. I’m all for having fun, but someone should have stepped in when he poured himself a quad-shot.

To be fair, Cohen conceded as much on Twitter.

I served myself, Karen.