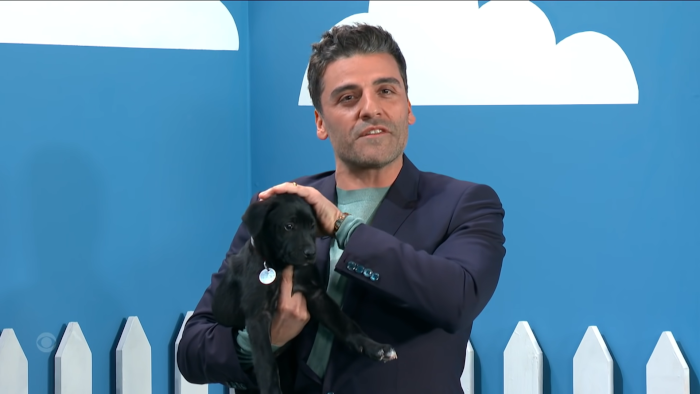 Adopting cute, adorable puppies is something most of us wish we could do. Unfortunately, not every dog can be adopted, as hard as people may try. That’s why Stephen Colbert features a segment on his show called Rescue Dog Rescue. He brings on a celebrity, they make up lies about adorable pups, and hopefully, the pups will be adopted. Who is the celebrity Colbert brought out this time? Wet those whistles, people, because it’s Oscar Isaac!

One of my favorite things about this bit is that it makes full use of its live audience. Whether or not they knew Isaac would be the celebrity guest, the pop he gets from the crowd when he comes out is massive. From that moment on the audience is in the palm of his hands. Just like one of the precious lil puppies he’s trying to help find a home.

Isaac is also as committed as can be. He’s reading off of cue cards but doesn’t feel stilted or awkward. He’s working that pearly white smile of his. He even manages to get a few chuckles out of Colbert. There’s an effortless charm that emanates from him as easily as most people breathe. Mix that in with some very cute, good, sweet dogs? That’s a recipe for success.