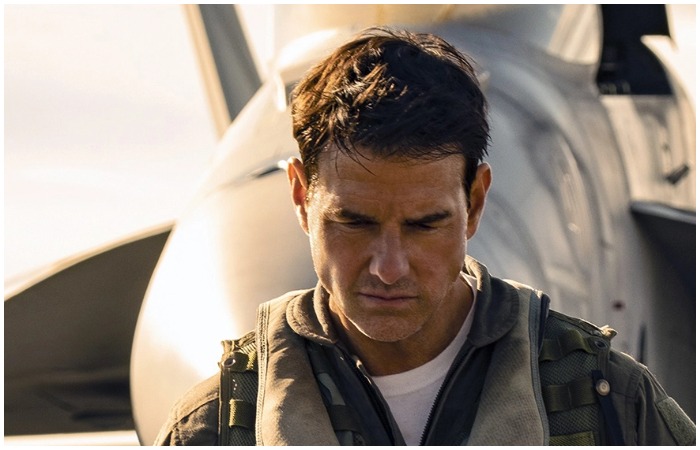 You’ll pardon me for being late to this, but up until two weeks ago — for various personal reasons — I hadn’t been to a movie theater since Ben Affleck’s The Way Back in March 2020. I saw Bob’s Burgers with the kids. It was joyous, and I reveled in the opportunity to sit in a darkened movie theater and eat overpriced snack food with children who actually respect the sanctity of a movie theater enough not to ask questions every 3 minutes as they do at home.
It was amazing.
Cut to a week and a half later, and I have an entire weekend to myself and the opportunity to watch as many movies on the big screen as I want. I had blocked out more or less a whole day for this. This would be my triumphant return, where I could finally do the thing that I love the most, the thing that has eluded me for more than two years: Sit in a theater all day and watch movies.

I watched Top Gun: Maverick. It was a blast. And then I went home.

This is obvious to everyone else who has been able to enjoy going to movie theaters again in recent months, but: There’s nothing to see, especially if you don’t live in Los Angeles or New York or Austin or another major metropolitan area. I live in a city — not a huge one, but a city nonetheless — with three theaters in close proximity (there were four, but two went out of business during the pandemic, and only one of those has returned under new owners), and there was nothing else to see. Look at the showtimes for our biggest theater: 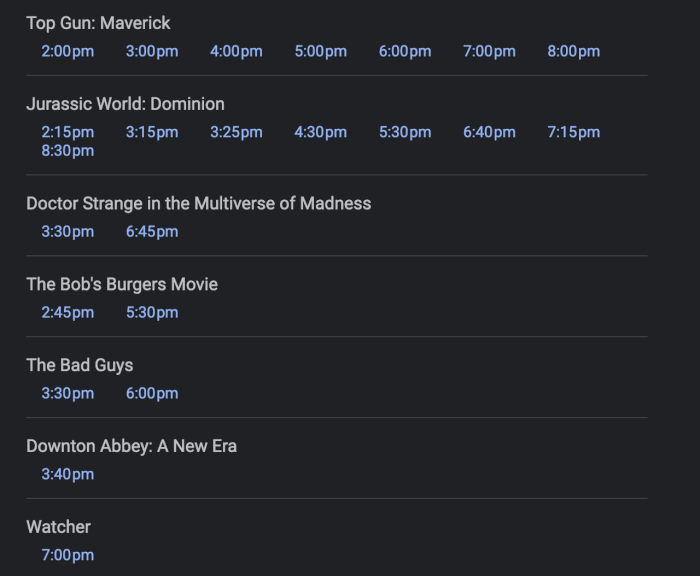 I saw Top Gun. I saw Bob’s Burgers. I had no desire to see Jurassic World: Dominion owing to the terrible reviews, Doctor Strange comes out for free on Disney+ next week. I am not the demo for Bad Guys or Downton Abbey and Watcher looks like something I might watch at home someday (but probably not).

On the same weekend in 2019, there were 11 movies on over 1500 screens. I’m not saying they were all great movies — Men in Black: International was the top film at the box office — but there were choices. If I hadn’t seen a movie in 2 and a half years, that weekend I could have watched Endgame, John Wick 3, Mindy Kaling’s Late Night, Booksmart, and Rocketman, and I wouldn’t have had to decide between X-Men: Dark Phoenix, The Secret Life of Pets 2, Godzilla: King of the Monster, Aladdin, Shaft, or Pokémon: Detective Pikachu or simply going home.

Three years ago, my favorite thing to do was go watch one — and often two — movies every Thursday night by myself. There was usually a big blockbuster to watch and then a good movie to watch, too. Every week! On one June weekend in 2018, I watched Ocean’s Eight and Heriditary and the very next weekend, I watched Incredibles 2 and Tag. Now? After a two-year absence, there was one movie I wanted to see. Then I went home and watched Adam Sandler’s Hustle.

Again: I’m not saying anything new. I’m merely recording this for posterity because I have been out of the game for a long time. Moviegoing is not the same. I checked the calendar for the rest of the summer, and there are exactly four (maybe five) movies I want to see in theaters: Thor: Love and Thunder, Bullet Train, Where the Crawdads Sing, Nope, and maybe Black Phone. There were times pre-pandemic when I would watch four movies in one weekend! The rest of the wide releases — movies that will screen in my theaters — are either kids’ movies and filler, movies not big enough to compete with the tentpoles or compelling enough to get snatched up by a streamer.

That’s it! This might be fine, maybe even preferable, for casual moviegoers who used to go to the theaters once a month — or once every three months — but for someone who used to abuse the hell out of my Moviepass subscription (remember that?), it’s a real kick in the ass. This is not even entirely the fault of the pandemic. COVID only hastened what the MCU, big studio mergers, and streaming had already set in motion: A future where casually treating yourself to a relatively inexpensive two hours of darkened solitude every week is a relic of the past.