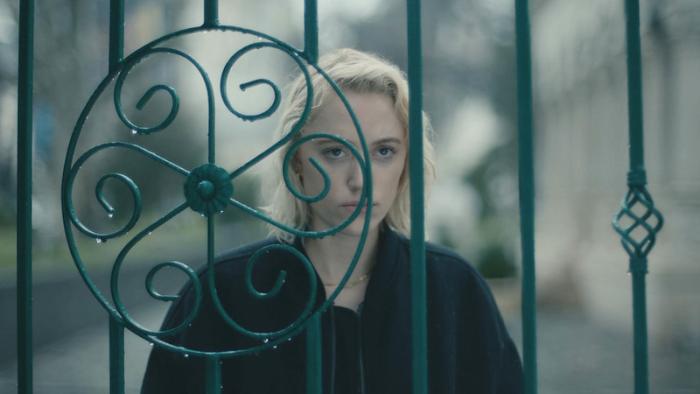 Ironically I usually find myself more inclined to queue up a movie, and quicker at that, when a critic complains that it’s all style and no substance. I love style! Who doesn’t love great style? I mean sure, yes, substance is great, obviously, don’t get me wrong. I’d love to live in a world where we always got both. But sometimes flashy style with oodles of throbbing atmosphere is just what the doctor ordered. And Chloe Okuno’s Watcher starring Maika Monroe (of It Follows and The Guest fame) and Karl Glusman (from Nocturnal Animals and The Neon Demon) as a hot young couple freshly moved to the cold old downtown of Bucharest is one such Doctor Feelgood’s recommendation. Dripping with ice over a barely repressed inner fire, this throwback to the days of De Palma and Polanski’s “Apartment Trilogy” isn’t maybe up to its inspiration’s high-rise standards, but it’s got a sleek edge that I reveled to anyway, substance much be damned.

Maika, with Hitchcock blonde hair and the wardrobe to double that down, plays Julia, and Glusman her beau Francis. His job’s brought them Bucharest-way, where he speaks the language (being half-Romanian) while she decidedly does not. Left at home all day to her own devices (she’s a former actress, current wanderer) Julia is mostly just finding herself lost. With shades of Isabelle Adjani in Possession—and given that once obscure film’s recent renaissance amid film nerds in the know don’t be surprised if you see a lot of movies nodding towards it in the near future—Julia wanders the foreign streets with nowhere to go and nobody to talk to, while Francis starts coming home later and later every night. Consumed with work, or so he says with those shifty eyes Glusman knows how to shift so well.

And then, as there ever is, there are the windows. The flat that the couple has moved into has gigantic ones alongside one wall, all looking straight out onto the side of another apartment building across the street. They barely notice the windows at first, making love in front of them as the opening credits roll and Okuna’s camera effortlessly glides back, back, back, looking back in at them. But before you can say Grace Kelly five times fast in her boredom and aimlessness Julia finds herself staring out at these windows… and then they really start staring back. One window in particular, where there seems to be a subtle man shape behind the curtains, with the vagaries of a face, blank as paper, nestled inside its shadows. And then the news shows all start talking about those grisly recent murders of beautiful girls…

So yes, we have seen this sort of thing before. A dozen times if you’re like me and this sounds like your favorite set-up in all the world. Watcher’s script is not exactly its strongest suit, and the film takes you pretty much to every place you’ve already plotted out in your head by what I’ve told you so far. It also doesn’t help that Julia and Francis, as gorgeous and watchable as Monroe and Glusman are, and are they ever, are sanded-down ciphers even against such slight demands. All we know about them is what I have told you—Julia doesn’t speak the language and is bored and lonely, while Francis works too much and ignores his wife. De Palma, for all his excesses, would’ve at least known how to make this set-up throb with something horny, gaudy, delicious. But there’s no such energy here, besides how spectacular Monroe looks at one point in a shiny red dress. That sex scene glimpsed from a distance at the film’s start is the only nod towards this couple’s sex life—the growing rift between the two of them has no focus to latch onto.

But Watcher has its pleasures too—enough of them that the lag between style and substance is mostly set aside in the actual watching of it. The silky cinematography from Benjamin Kirk Nielsen, muted creams and grays just screaming out for the splashes of crimson we know will come eventually, is to die for, leaving just the right amount of fuzzy out-of-focus at frame’s edges to make us lean forward. There’s an absolutely chilling sequence on a subway train at night that deserves to be studied under the banner of “how to film suspense” and Watcher, wildly restrained until its last act at least, thrums with suspense more than a couple of times. Shot during the pandemic on the wide unfamiliar avenues of its old Romanian town there’s vibe and hum enough to this thriller to savor, to lose yourself under its spell alongside its leading lady, even if like satin sheets it slides off by sunrise.