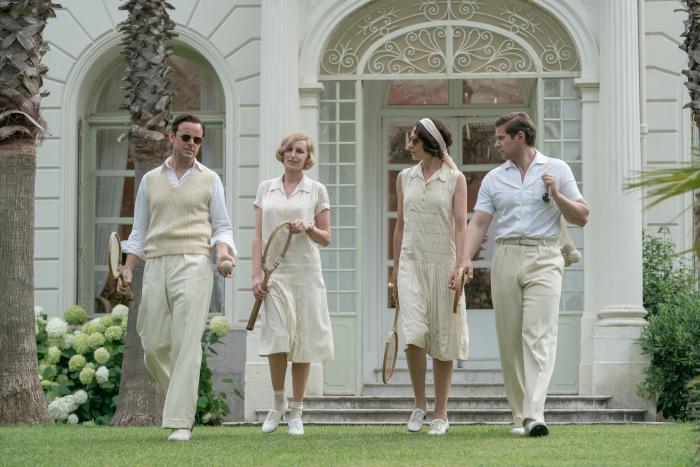 Review: 'Downton Abbey' Might Have Found 'A New Era' But It's Blessedly Just More Of The Same Ol' Frothy Business

I don’t know if you guys have been paying attention to the world lately or not, but lemme tell you what—the world’s shitty, you guys. Real shitty everywhere! And when the world’s especially shitty (see also: The Great Depression) it only makes sense that people will look for escapism in their entertainment. You could say that the Marvel Cinematic Universe (the MCU) is basically the modern equivalent of the 1930s Busby Berkley Complex (the BBC)—Dick Powell is Captain America! Ruby Keeler is the Black Widow! They had their Gold Diggers, we have our Avengers—different costumes, same ol’ put-on-a-show spiel!

But there’s another modern-day franchise that bridges that gap maybe a little finer for the self-proclaimed sophisticates among us—the ones who don’t know a Bruce Banner from a Natasha Romanov but who also nevertheless need their escapist bliss—and that’s the ever impeccably appointed soap-froth series of the Downton Abbey show and films. I mean sure, the Moon Knight can battle ancient alligator deities upon the razor-thin edge between life and death, but has he ever had to withstand a withering glare from the Dowager Countess from across a dinner table? Even Thor would dust on impact.

And this weekend brings us back to the Crowleys and all those familiar-faced hangers-on with Downton Abbey: A New Era, the second feature-film since Julian Fellowes’ much-lauded ITV-to-PBS series ended in 2015. Following in the 2019 film’s well-heeled footsteps this sequel’s much of the same… no seriously, it’s so much of the same. Now just instead of the King and Queen coming to visit Downton this time it’s a cavalcade of silent film stars using the estate as their movie-set—cut rinse and clapboard, scene. But what of it? Who cares? If I want to see Lady Mary (Michelle Dockery) pronounce that “the modern world has finally come to Downton” again and again and again every damn year like the clockwork of an expertly-set cuckoo clock then who’s to stand in my way? Don’t make me sic Maggie Smith on you. Cuz I will, dammit.

To be honest I will admit that I grew tired of Downton when the show was still airing and I only ended up watching about half of its six seasons—I think Bates (ugh) was on trial or something—as the soapiness of it grew too repetitive and accumulatively outrageous. But movie-wise, hopping back into this world for a fleeting two hours like half-seasons on bigger expensiver fast-forward, well this situation works like gangbusters for me and I hope they make dozens of these babies. I want to see Lady Edith (Laura Carmichael) funding the Black Panthers! I want to see that hot gay footman Barrow (Rob James-Collier) marching with the Mattachine Society! Little Georgie Crowley becoming a real-world James Bond—it’s groovy, baby!

For now though it’s only just 1928, and everything’s pretty much right where the last movie left it. The grand romance of the last film, the one between the driver-turned-relation Branson (Allen Leech, who never met a trouser he couldn’t turn obscene through sheer force of will) and the maid-turned-relation Lucy (Tuppence Middleton), has led to a happy marriage to open the film, and with it for Lucy some fresh step-motherhood to little Sybbie, the daughter of Branson’s former love and the third daughter of the Crowley family, the sadly deceased Lady Sybil (RIP Lady Sybil!). And you’d be forgiven for thinking early on that this movie’s aiming for Four Wedding and a Funeral realness, as the Dowager Countess Violet Crowley (Dame Maggie Smith, duh) is practically carrying around her own scythe with in her long satin gloves everywhere she goes, so intent is the film on reminding us of how we found out in the former film that our beloved matriarch is now really for real standing at Death’s Door, dun dun dunnnn.

These two story strands slam together to form the main thrust of this movie’s plot (outside of the movie shoot, that is), as an old somebody from the Dowager’s past bequeaths her a French Villa, which she then decides to gift her great-grand-daughter Sybbie since the child, with the low-born parents she’s left with, won’t be seeing much else in the way of future fortune. This gift, and all of the possibly romantic histories and mysteries that surround it, sends half the cast off to France for the summer—shades of A Very Brady Sequel, and I half expected to see the Countess Cora (Elizabeth McGovern) surfing the English Channel. And whilst they’re away the other half of the cast—meaning most of the Downstairs crew plus the Dowager and Lady Mary so we still care—deals with all those inflated movie star egos; with an addled yet sexy director in the sparkling form of Hugh Dancy wearing tweeds and jodhpurs and that half-grin he’s always wielded so spectacularly; and oh right the invention of Talkies, oh my. Cue lots of meta jokes and Dame Maggie horrified by it all, to still great effect—that Dame’s still got it, and forever will.

No no there’s nothing subtle about a whit of any of this—this is the sort of movie where a character will pop on over to their lawyer’s house for a midday spot of signing their will, carrying an entire orchestra of foreshadowing strings on their little back for the journey. That’s not to mention that it’s all wealth-fetishizing nonsense that adores the class system and thinks these servants were as happy in their place as was Mammy in Gone With the Wind. As ever. And yet I just can’t bring myself to side-eye it, even while my better angels beg for stiff drink—it’s hard to side-eye something that entirely swept me up for two straight hours in its intricate web of who-knows-who and who-slept-with-who and who-the-hell-was-that-again’s, all flying by with such bright colors and such regal gallantry, buffed to an epic sheen from the chandelier beads down to the butler’s hair. Downton Abbey: A New Era remains the perfect cocktail of escapist bliss, and my tired, tired mind and heart thanks everyone involved for the two hours’ rest.


← Honk Honk: 'Titane,' 'Crash,' and Good Old-Fashioned Car Sex Movies | The Most Ridiculously Posh British Actors and Musicians According to Their Wikipedia Entries →