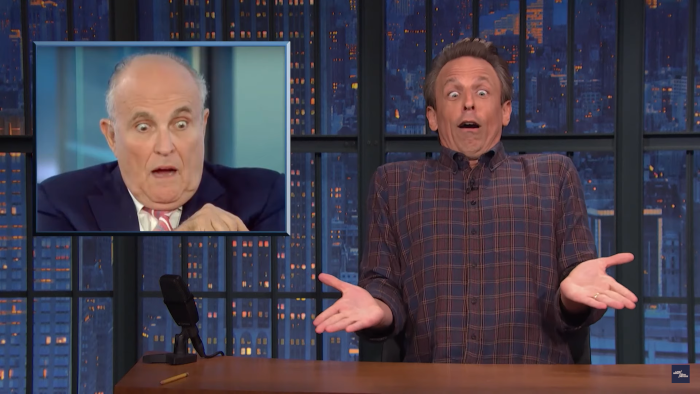 There was a time when Rudy Giuliani was nicknamed “America’s Mayor.” That name disappeared when the rest of America got to know him. I’d call him a shell of his former self, but it’s quite the opposite. The Rudy we see now is Super Rudy. He is everything that he has been building toward all these years. While plenty of late-night hosts love to have a go at the recent Masked Singer contestant, none seem to delight in it more than Seth Meyers.

Meyers has a segment on his show called A Closer Look where he takes a ten to fifteen-minute deep dive into a specific topic. No matter the subject, Meyers can often be found breaking into a Rudy Giuliani impression that is less than flattering. Though, to be clear, Rudy doesn’t deserve flattery. It should come as no surprise that, when it was revealed that Giuliani was drunk in the White House on election night, Meyers got as giddy as he can get.

Meyers devoted large chunks of his newest Closer Look to eviscerating the star of Borat 2. It was an easy task. People in Trump’s orbit seemed more than eager to throw Giuliani under the bus. Even Jared Kushner used his rarely heard voice to speak up against Rudy. You can smell the excitement on Seth, much like you could probably smell the booze on Rudy. Though, in his defense, turpentine has a pretty distinct odor. Besides, what else could he use to get hammered and also dye his hair?

← 'Joker' Sequel Reported to be a Musical; Lady Gaga in Talks to Star Alongside Joaquin Phoenix | Recorded for Posterity: Moviegoing Ain't the Same Anymore →