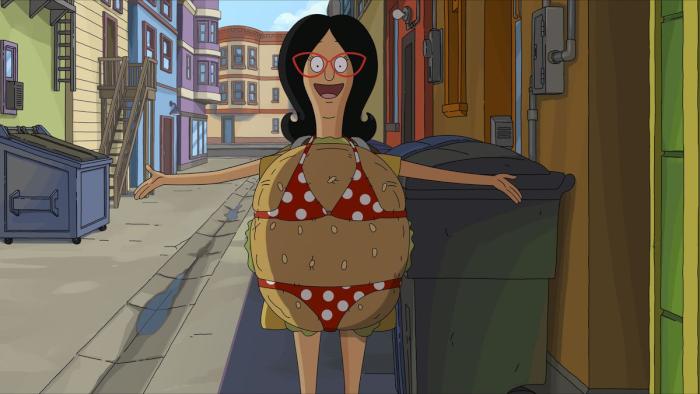 Review: ‘The Bob’s Burgers Movie’ is a Feature Length Episode in the Best Possible Way

Many primetime animated sitcoms have come and gone over the past thirty years on American network TV, each hoping to capitalize on the stratospheric success of a little show called The Simpsons. Most of them failed at the first hurdle, either too eager to copy the yellow ones beat for beat or too esoteric to survive the ’90s comedy boom. Bob’s Burgers is one of the rare exceptions.

Created by Loren Bouchard, the Fox comedy is still delighting audiences after 12 seasons, and has won over critics with its blend of laugh-a-minute gags, musical interludes, and characters that feel comfortingly relatable even as they descend into the absurd. Imagine a halfway point between The Simpsons and King of the Hill and you’re halfway there. Now, the Belcher family and their pun-heavy burger menu are on the big screen, although their new landlords at Disney don’t seem to have much interest in their shenanigans given that they’ve put them up against Top Gun: Maverick. It’s a shame (although not especially surprising) because The Bob’s Burgers Movie is a total delight.

It’s the week before Summer vacation and the Belchers are not doing well. Bob and Linda have one week to make enough money to pay off their business loan or risk losing it all. Any hopes of a busy week of selling burgers are dashed when a sewage pipe explodes, causing a giant sinkhole to form right in front of the restaurant. How could things get any worse? There’s a dead body in the sinkhole, a carnival worker who went missing six years ago, and their landlord Mr. Fischoeder may be the murderer.

One of the best things I can say about The Bob’s Burgers Movie is that it’s an extended episode of the series. That sounds like a slam but, really, it’s kind of brilliant how neatly this film fits into the world and continuity of the show. The well-established chemistry between Bob and Linda is here, as are the kids’ fierce personalities and proudly weird asides. The gentle pace has not been sacrificed for a more movie-esque rush. There aren’t any big-name cameos or guest voices to disrupt the carefully detailed world. It’s not an outlandish premise, all things considered, and it’s not delving into the realms of high-concept blockbusters for plot ideas. Everything feels like a slice of life, albeit with higher stakes than the typical 22-minute narrative can offer. The Belchers are a working-class family whose financial troubles have often been front and center on the show, and here, it’s no different. There’s a grounding to the film, and the show in general, that’s kept it strong and appealingly low-key over the past decade. Isn’t it kind of wonderful that we have an American sitcom like this that’s team eccentric working class?

The addition of a kids-with-bikes mystery to figure out who murdered the carny feels perfectly organic, helped along by some patented Bob’s Burgers tropes, such as the various and supremely catchy musical numbers. Fittingly, they’re as hilariously ramshackle as the show itself, with the choreography the kind of low-level shuffling you’d expect from line cooks, carnies, and bored lawyers. This plotting is about as dense as the series gets but it doesn’t overwhelm those small character moments that have made Bob’s Burgers endure. Linda is still brashly optimistic even in the face of ruin. Tina’s worried that her endless crush on Jimmy Jr. might not last if she asks him out and her horse and zombie friend-fiction heavy fantasies are forced to give way to reality. Eugene has fashioned a new musical instrument out of a napkin dispenser but fears his musical drive outshines his talent. Louise, at the grand old age of nine, gets called a baby by her classmates and becomes determined to prove she isn’t. Again, it’s all what you’d expect to see in the show, in the best way possible. This means that the film isn’t exactly an entry point for newbies to the Belchers, but the jokes are still so plentiful that even burger skeptics will laugh out loud more than a few times.

There are a couple of moments that feel underdone. Bob’s late mother is invoked for a heartfelt moment that comes out of nowhere and could have used at least one establishing scene beforehand. The villain is hilariously obvious but that’s also in line with the show (there really aren’t that many big reveals in real life, and there aren’t for the Belchers.) It’s all very familiar in a way that might make some fans hope for a zesty twist, not unlike one of Bob’s specials of the day. The unassuming nature of the series doesn’t invite such bombast, unless it’s a Linda musical solo. I’ve seen some people say that it doesn’t feel essential as a movie, but I think that’s the point. The dramas of the Belcher’s lives might not be the stuff of typical Summer movie fare, especially when it’s up against Tom Cruise’s death wish and the 18th Marvel thing of the year. The things that worry us the most aren’t the motivations of superheroes (or most animated shows these days), whether it’s paying our bills or asking out the guy with the nice butt. That doesn’t mean they’re unworthy of 100 minutes of big-screen attention. Hell, let’s have more animated stories in this vein.

There is no Marshmallow, however, and that is a point against the movie.

The Bob’s Burgers Movie is probably not going to provide any real competition at the box office to Top Gun: Maverick (I imagine the inevitable Disney+ release will fare better) but it’s still highly worth your time. To laugh so consistently in the cinema is a real joy, and to be part of such a familiar and inviting world as the home of the Belchers is a charm I can never deny myself. Plus, it will make you want to order a burger about five seconds after the credits roll. I consider myself saint-like for resisting that temptation. But I did buy the series official cookbook. I’m not a total monster.

The Bob’s Burgers Movie is in cinemas now.