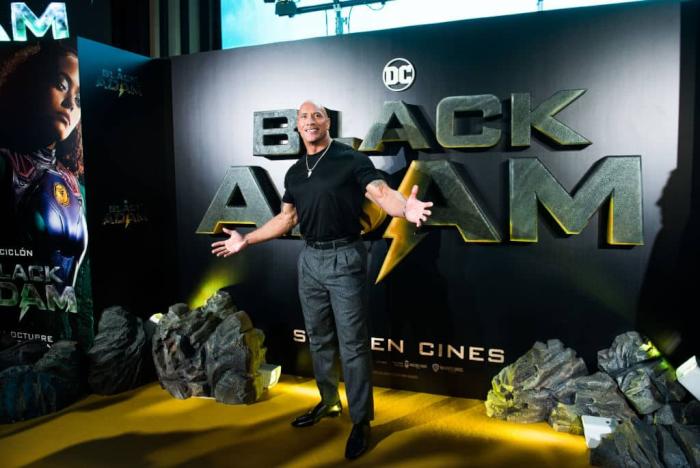 Sorry Dwayne: 'Black Adam' Set to Be a Box Office Disappointment for DC

2022 was supposed to be the year that audiences returned to theaters. The film industry has quickly realized that streaming exclusives and simultaneous VOD releases aren’t the money-makers they expected or needed them to be. There have been a few major hits, most notably Top Gun: Maverick, which remains the highest-grossing film of 2022 by a country mile. To nobody’s surprise, the films dominating the top ten of the year are franchise fare, with the sole exception being a Chinese sci-fi called Moon Man. We’ll have to wait and see how Avatar: The Way of Water does (hey, don’t write off James Cameron.) But it is notable how many of those hyped titles didn’t live up to even measured expectations. Case in point: DC’s Black Adam.

Warner Bros. Discovery, the newest media conglomerate of evil ineptitude, put a lot of weight on the meaty shoulders of Dwayne Johnson. After all, Black Adam was one of his pet projects and the artist formerly known as The Rock is a true movie star with box office force. They hyped the movie to the nth degree, declaring it to be a shake-up of the ‘hierarchy of power’ in the DC Universe. What wasn’t there to like about a dark and murderous villain-slash-antihero who would eventually go toe-to-toe with Superman (but not Shazam for some reason)? Add to that a reported budget of about $195 million and the entire release screamed Event Movie. Alas, it seems to have ultimately been a disaster for DC and WBD.

According to Variety, Black Adam will ‘stall out with less than $400 million globally’, which isn’t great news for a movie that needed to make at least $600 million to break even. They calculate a loss of between $50 - 100 million for the studio, although it wouldn’t be surprising to hear if that number is higher than officially noted.

So, what happened? There are a lot of issues at play here. One, there’s this thing called the COVID-19 pandemic. You may have heard of it. But it’s also true that Black Adam was always going to be a tougher sell for DC. He’s not an A-tier character, known to audiences who don’t know intricate comic book lore. Marvel had to build an impenetrable expanded universe of continuity before it could truly get away with coaxing viewers into the likes of The Guardians of the Galaxy. But it’s not a DC vs. Marvel thing here, as it’s so often portrayed. You can’t really compare the franchises in terms of tone or style or audience intent, at least not these days.

It is notable, however, that Warner Bros. Discovery has never really known what to do with its grand comic book universe. That’s never been more obvious than this year, thanks to the oft-nonsensical business decisions of CEO David Zaslav. Batgirl being canned entirely for a tax write-off is but one example of this firestorm. They claimed to want a greater focus on the theatrical experience and that some films weren’t up to that standard, but it’s not as though Black Adam received stellar reviews. But hey, you try telling Dwayne Johnson you’re canning his movie.

Warner Bros. Discovery didn’t release a ton of films in theaters this year, with reports suggesting that their at-hand cash problems are messy. If Black Adam was supposed to buoy the sinking ship, it doesn’t seem to have worked, although I’m not sure what would work. It’s not just WBD who are struggling these days. Disney saw two major animation flops with Lightyear and Strange Planet, as well as the startling underperformance of Amsterdam. Lionsgate had a major flop with Moonfall. Morbius was a meme but not much else for Sony. With the theatrical window shrinking, a lot of those meh movies are being dismissed as future streaming fare and not immediate cinematic experiences. Unless you’re a must-see cultural event, like Top Gun: Maverick, you’re not guaranteed much of a boon.

Really, all of the problems we’re seeing with the box office this past year or so were inevitable. Pre-COVID, things weren’t going great for Hollywood, and all of the shifts we expected to see happen over the next decade were truncated to a matter of months: shortened theatrical releases, a bigger rush to VOD, simultaneous streaming premieres, the abandonment of mid-budget fare, and so on. The only truly unexpected thing from this change is the realization that nothing is immune, not even the biggest movie franchises on the planet. It’s not enough to have a recognisable IP or big star in all that spandex.

WBD has James Gunn in its corner now, which should, if nothing else, offer some creative consistency. Aquaman 2 is around the corner, and Joker: Folie a Deux is currently in production, albeit with a far greater budget than the first film. Blue Beetle has also been moved from a streaming title to a theatrical release. They have options. And they’ll always have Batman. But their problems are those of the rest of Hollywood. Will anyone learn or will audiences suddenly rush back to the theaters like they used to? Again, let’s see how that Avatar sequel does.


← T.J. Holmes Is Reportedly a 'Serial Cheater' and a 'D--k' | Terrifying Future Horror Cult Classic 'Skinamarink' Gets a Release Date →