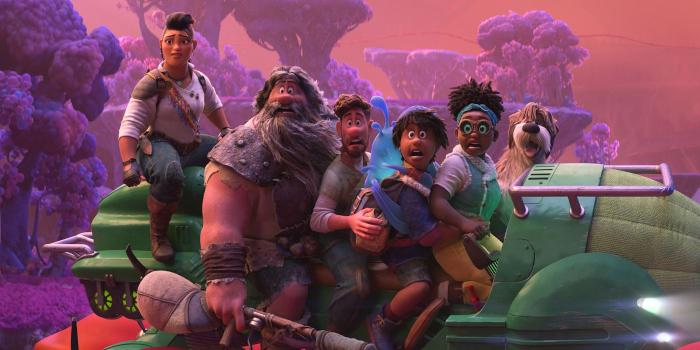 Disney’s going back to its classic action-adventure days. Reminiscent of films like Atlantis and Treasure Planet, Don Hall and Qui Nguyen’s Strange World is wondrously vibrant and grand in scale. However, it seems the filmmakers dedicated more time to crafting its titular strange world than honing in on its themes. Qui Nguyen’s script has a little too much familiarity. A group of people get together to save the future of their town; there’s tension along the way, but they eventually learn to work together. Mix in daddy issues and climate change, and it feels old hat. Every year it seems Disney tries hard to be the best in the animation game. More often than not, they succeed. The year started strong for them with Turning Red but ended now on a whimper. If it weren’t for the world-building and overarching messages — that seem even more poignant on a Thanksgiving weekend — it would be a flop for the Mouse House.

Opening like your favorite comic book, 2D animation introduces us to Jaeger Clade (Dennis Quaid). The film flips through his life as an adventurer who wants to be legendary. When the future of his home, Avalonia, is at stake, he aims to save it by passing beyond the mountains to discover what lies ahead. It’s not all selfless; he wants glory. His unbridled ambition to make new discoveries takes hold of him and takes him away from his wife and son in the process. Jaeger is always looking beyond, while his son Searcher (Jake Gyllenhaal) pays attention to and appreciates what’s around him. What could save Avalonia turned out to be right in front of them, with Jaeger refusing to see it.

The world seen by fathers and sons is through different generational lenses. Years after his father left him, Searcher finds himself clashing with the perspective of his own son, Ethan (Jaboukie Young-White). There have been many “first” gay characters for Disney, but never so openly in animated form as with Ethan. He gets the freedom to adorably flirt with his crush and talk about it, and his sexuality is never an issue. It’s refreshing and luckily not the cause of the generational divide.

Along with being a father, Searcher is also happily married to his pilot wife Meridian (Gabrielle Union) and has been successfully farming what he found to save his city all those years ago. Pando is a plant that is providing the now steampunk Avalonia and its residents the ability to build airships and power their homes. But when his crops face infection, Searcher finds himself dusting off his old explorer backpack. An expedition to save Avalonia is on the horizon, to Searcher’s displeasure. He never wanted to be like his father, and Ethan’s enthusiasm for adventure scares him. His son wants to know about his grandfather and see what’s out there by coming along to follow Pando’s roots. What is out there is the discovery of a breathtaking world underneath their own, full of strange creatures and surprises. It’s a weird family road trip, but one that leads to its characters learning to forgive one another and learning to accept what they can’t change.

Strange World’s vast expanse and sense of adventure can’t be doubted. As the Clades, along with their expedition leader Callisto (Lucy Liu), descend into the heart of Pando, they find that everything is alive. It’s a stand-in for our own world that isn’t just a rock we live on, but a living thing - and it’s dying. These similarities and the message that advancements actually kill are always in our face. It’s a topic of discussion and a real problem whose importance can’t be understated, but using it as a theme in media is becoming just as tiresome as the politicians who don’t want to do anything about climate change. What’s also quite tiresome is all the arguing between the film’s father-son pairings. Fathers want their sons to be just like them, so when they make decisions on their own to forge their own path, it’s cause for a fight. It seems that because the film is lacking in impactful conflict somewhere else, they had to hammer home the difficulty that some fathers and sons have at seeing eye to eye.

The film has plenty of action but is lacking in comedy. The humor falls flat, but the strangest thing about the strange world that Disney built here is that it lacks emotion at times. When Jaeger and Searcher or Searcher and Ethan have a heart-to-heart, it feels forced and tries to play it light but results in having no impact on the audience. It is interesting, however, to see the script letting us pick out all the similarities between the characters, especially when they try to be so different from each other. The film has an infectious energy thanks in large part to the voice work. Gyllenhaal is the standout with endless levels of enthusiasm and spirit in his voice. But the real star of the show is a blue blob called “Splat”. Its adorable, squeaky way of communication and friendship with Ethan made Disney call themselves out on merchandising the cute side characters.

All in all, Strange World is a decent family bonding movie, while still a pretty weak entry to the Disney library. As said, its overarching messages are ones to take home. The film is a reminder to forge your own path no matter what other people think, as well as a reminder that despite human beings’ fear of change, we are more resilient than we think, especially if we have those we love by our side.