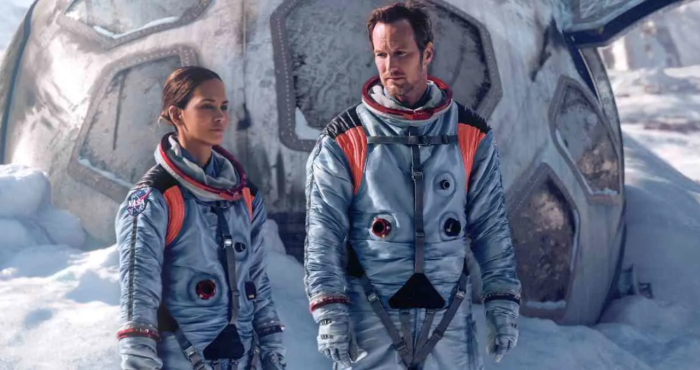 If you’re wondering if the Moon falls in Moonfall, let me get that great big spoiler out of the way right up front. The moon falls in Moonfall. Well, sort of. The moon spins downward and it crumbles, anyway. The moon falls … it crumbles. And the people, the people stand tall. Facing … it all. At … the Moon’s faaaaaaaall. Do I think that Roland Emmerich, the blockbuster director of Independence Day and 2012 and The Day After Tomorrow and the Godzilla that time forgot, might have gotten the idea for Moonfall in the middle of scream-singing an Adele song at karaoke with his friends? Is that what I am saying here? Well, I’m not ruling it out, let’s just say that. In the spirit of this movie’s deranged aesthetic, one shouldn’t rule out any of the so-called nuttier propositions.

So maybe it also could be theorized that Emmerich fell asleep on the sofa a couple of Thanksgivings ago while watching the Dad-tested-and-approved series “Ancient Aliens” on The History Channel. There, amid the trippy wave of tryptophan and mild IBS-related nausea, the further ideas for Moonfall—wherein the Moon, it falls, but oh so much more—came to him that way. Like a fully formed Turkey waving its stubby cooked wings wildly, demanding to be birthed unto the world. One pictures Emmerich mad-eyed, throwing a story treatment at his co-writers Harald Kloser and Spenser Cohen and, to paraphrase Donatella Versace by way of her SNL caricature, demanding that they turn this telephone into a dress. “Make me a Moonfall!” This is how Moonfalls are made, after all. That all just makes the most common of common sense. You just have to connect the dots, people!

But this is how Moonfalls are unmade as well. Everything becomes possible, and somehow that fact becomes more interesting in the end than the movie is itself. One hundred and forty million dollars was spent on this big-screen disaster spectacle starring Patrick Wilson and Halle Berry as sexy scientist-astronaut humans trying to keep the Moon from falling on their heads, and in the end it occurs to me that I’d rather watch a movie about the process of how something this truly absurd comes into being than the gibberish stew that Emmerich ultimately delivers. I mean how, Moonfall? What Moonfall? Where and When and Why? Oh, the money is occasionally up there on the screen—every fifteen minutes or so Emmerich remembers he’s supposed to be making a Disaster Movie, and he gives us a money shot where the Moon scrapes across the surface of Earth and entire cities are sucked up like those television commercial animations of razor blades yanking hairs up by the root.

But Moonfall is so much more than the Moon simply falling, splat, on our collective heads. I don’t mean just the usual Disaster Movie tropes of trying to pretend its cardboard cast of characters have more than one dimension—the typical junk-food spiel about how Family Matters Etc. that we’re used to. That much is an expected part of the game. I suppose it’s inevitable—even the makers of both adaptations of H.G. Wells’ The Time Machine knew that the Moon falling on our heads was only good for one memorable sequence’s worth. Emmerich too seems to have realized this, at least after he came up with the title anyway. As the trailers for this film grew increasingly convoluted the more they showed of the movie, the more this scatterbrained inevitability became plain. You have no idea. I hesitate to spoil the film’s plot complications because I hesitate to think I could even type the words into existence that could spoil such things. How do you spoil nonsense? How do I type the phrases “alien mega structure” or “dwarf star gyrosphere” without getting paid millions of dollars to do so and then still be able to look at myself respectfully in the mirror the next morning?

I say all of this with the foreknowledge that I will one hundred percent re-watch Moonfall whenever it shows up on pay cable, from now until any and every point in the near and the very distant future. Perhaps one day my consciousness will be downloaded into a star-sized super brain computer, and if that happens, and if you come looking for my consciousness, I can promise you that you will inevitably find it over in the Moonfall section. There my consciousness will be, happily re-watching Moonfall and all the rest of the Disaster Movie crap until Existence blips right out with the Big Bang’s final wheezy stretched-thin exhalation. This much was written in the books of forever ago. Disaster Movies are warm massages to my brain folds, flattening out all worries in spectacles of sound and CG fury, and I eventually come to adore every one of them no matter how shit. It’s as inevitable as adorable tykes and old ladies and puppy dogs weathering storm surges ten stories tall, or so I have been told happens via these movies time and again. And you come to believe it.

One just wishes that Moonfall, for all its truly wild plot swerves and over-the-top out-of-this-world storytelling antics, was having some more fun with its everything. I generally love Patrick Wilson and Halle Berry but these sexy scientists of theirs remain supremely flat and dour. How do you make a crackling character actor like Michael Peña as ferociously lifeless as his stepfather character comes across here? And woe be to the coming winter, don’t even get me started on Game of Thrones’ actor John Bradley as the stock conspiracy theorist character—you know, The One Who Was Right Along—who Godzilla-stomps out all goodwill as the script forces him to repeatedly whisper the name “Elon Musk” as prayer. That’s enough to make anybody stop believing in anything and everybody stop believing in everything to boot.

You take a goofball good time like Twister—it had cows! It even said so. “We got cows!” I have seen the memes; I know of which I speak. Cows twisting through the air, Philip Seymour Hoffman in a little pink baseball cap that was somehow both too small and too big for his head at the same time. There’s playfulness there that Moonfall never quite summons. Even Independence Day, one of my least revisited Disaster Movies, has Will Smith punching an alien in the face. Moonfall is as full of cheese as the kid stories told us the Moon was gonna be, but it forgets to shake the spray-can up and make its spray cheese sing. Yes, I’ll scrape the cheese off the floor and I will eat it anyway. Of course, I will. But only in private, and I sure won’t let on about it anywhere but here, among you fine people.

← Netflix's 'In From The Cold' Is a Spy Thriller That Works Surprisingly Well | Serial's New Podcast 'The Trojan Horse Affair' Is Very, Very Good →