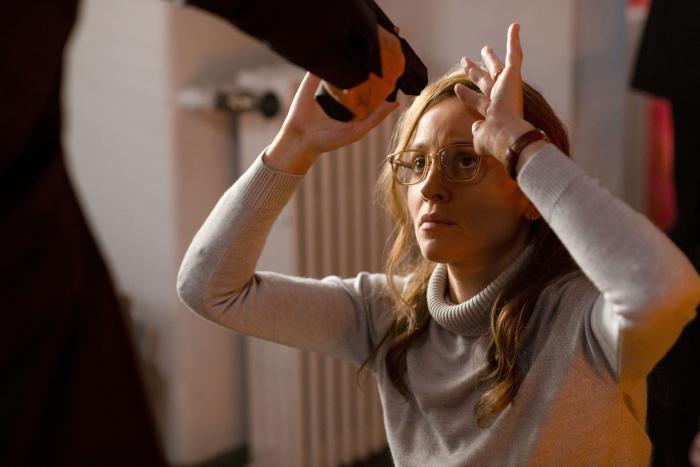 We’ve had a run on the “butt-kicking female spy” genre of late, and I’m not saying that’s a bad thing. The catch, of course, is that not all of them have been good. It often feels like everyone is trying to live up to the legacy of Sydney Bristow, or to use a more recent example, Atomic Blonde’s Lorraine Broughton, and those are difficult shoes to fill. Jessica Chastain’s Ava was a mixed bag and the ensemble The 355 was a mess. Perhaps the most fun has been Mary Elizabeth Winstead’s Kate and Karen Gillan’s Gunpowder Milkshake, but one thing that’s remained consistent is that they’ve been films rather than television series. Netflix is hoping to change that with its newest series, In From The Cold, and it does so with surprising success.

In From The Cold is an odd entry, however. It features Russian-born actor Margarita Levieva as Jenny Franklin, a New Jersey suburban mom who’s visiting Spain to chaperone her daughter Becca’s (Lydia Franklin) ice skating tournament. It doesn’t take long for things to go sideways, however, when Jenny is kidnapped and confronted by a mysterious American agent named Chauncey (Cillian O’Sullivan), who knows more about Jenny’s past than anyone else in her life. Jenny, you see, is actually Anya Petrova, a former Russian spy/assassin formerly known as “The Whisper” who went into hiding, and Chauncey needs her help. Through persuasiveness and extortion, Chauncey and his hacker sidekick Chris (Charles Brice) talk Jenny/Anya into helping them as they try to uncover a plot to overthrow the Spanish government by — surprise — a secret cabal of nefarious folks.

As you can tell, there’s a great many familiar tropes to be found in In From The Cold. However, there’s also a great deal beneath its surface that separates it from the pack. Its performances are uniformly solid, particularly Levieva who capably juggles the balance of anxious, 40-something single mom with desperate, hardened, and often brutally ruthless operative. Combined with an impressive physicality and strong stunt work and fight choreography, the show manages an excellent job of making you believe that she is from both of those worlds. This is helped even more by flashback scenes of a young Anya in an early mission that ends up tying into her current one in surprising ways. The youthful Anya is portrayed with surprising depth and vulnerability by Stasya Milovslavskaya, who quickly finds herself in too deep with her operation.

The show throws several unexpected curveballs at its audience, and it does require a bit of suspension of disbelief. There’s a surprising and somewhat convenient science fiction element to it that, while the theory is likely dodgy at best, is a fun addition to the mix that if you can remain unspoiled for, will be a pleasant treat (no, no one is an alien). There are also several subplots threaded through the eight-episode season — Becca struggling to cope with the Mean Girls on her skating team, Chauncey’s secretive past and motivations, and the mystery behind the mastermind known only as Gideon. It does not all tie together neatly, and on rewatch there are several elements that simply don’t make sense. Series creator Adam Glass cut his teeth on shows like Supernatural and Cold Case, but also as a comic book writer for Deadpool, Luke Cage, and Suicide Squad, and elements of those varying genres are all shown here — sometimes for better, sometimes not.

That aside, In From The Cold was an overall effective, enjoyable binge. I found myself hooked fairly quickly and given its briskly paced eight episodes, it never gets bogged down. It’s fast and fun and often gruesome in its violence, like an R-rated The Americans. Its often labyrinthine plot never overcomplicates itself, and while its revelations aren’t always as clever or surprising as it wants them to be, they’re still a blast to watch unfold. If you’re looking to get your spy fix, you could certainly do a hell of a lot worse.

In from the Cold is currently streaming on Netflix.