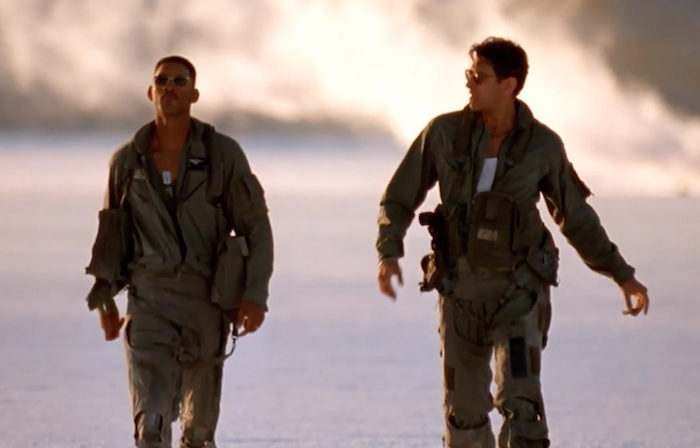 What if 'Independence Day' with Will Smith is a Warning?

Hear me out on this one. There is nothing I love more on the 4th of July than to shun all human contact, sit in my darkened living room, and relive the magic of Independence Day, the 1996 classic movie starring Will Smith, which I believe to be the best of all alien movies starring Will Smith (it is its own genre, for sure.)

However, with each passing year I watch it (including the summer of 2008 when I was going through a break up, and watched it every day for a month because it was the only thing on TV, and break ups are hard, OK?!) I cannot shake the feeling that maybe, perhaps Independence Day isn’t a fun popcorn movie, but a serious warning that danger could be coming for us from above, at any moment, and no, I’m not just talking about a dreaded Sharknado. (Although that could happen too.)

So for those of you that maybe haven’t seen this movie but inexplicably clicked on an article on it because you like to live life on the edge—Independence Day is about aliens coming to the earth who don’t come here in peace, but to cause a ruckus. They blow things up, and ultimately we save the day because it’s 1996 and computers are still seen as magic, so we upload a virus to their motherboard system, which defeats their defenses. Randy Quaid is there also. As is Jeff Goldblum (who, honestly? I would in this movie. Don’t lie. You would too.) and Will Smith, Vivica A. Fox, a super cute child actor who I realize is probably in his 30’s at this point, Judd Hirsch, and the best goddamned movie president this world has ever see, Bill mother*cking Pullman. An all-star cast to be sure.

Anyway, the reason why we’re here today is that, yeah. What if this movie isn’t fictional but a warning put here from our future selves who not only learned that aliens are real and mean, but also how to time travel to leave warnings for us to be aware!? If that’s the case, what can we do to prepare for the aliens who come to our home planet to make some noise? Look, we still don’t know what happened yesterday that caused our Vice President to cancel his trip, Putin to cancel all meetings, or a possibly fake EU council to convene. So we don’t know definitively that aliens aren’t going to come tomorrow and f*ck things up for us. Luckily for you and all of humanity that I’m here today to help. I’ve developed a 4-pronged methodology that should save the world. Here it is:

First off, go talk to the 11-year old in your life. If Hackers taught me nothing it’s that 11-year olds are the best hackers this world has ever seen. Perhaps the one in your life already has a file on hand that they have on the ready to mess with alien computer systems. The only thing working against us here is that the movie is now 22 years old, so perhaps 11 year olds aren’t into it anymore. Especially because the more recent sequel sucked. So I guess you need to talk to the 11-year old in a two pronged approach. First, ask them if they’ve seen Independence Day. (If they haven’t go show it to them.) Second, ask them if they have a computer file to hack the aliens. It must be in this order. Don’t question it.

Second. If any of you personally know Will Smith, I suggest you go talk to him on behalf of all of us. Life frequently imitates art. He may have some tips. He may also sing that song from Hitch I like, if you ask him nicely…but ask him about aliens first, OK? Be specific in your question because I don’t think a mind erasing tool will work for our purposes like in Men in Black, and now is not the time to confuse your franchises, OK!?

Third. This is specifically for the flight instructors out there. Go find Randy Quaid. He’s going to need to fly a plane for real this time. I don’t make the rules, I just write things on the internet in hopes that one day Randy Quaid reads it, and actually decides to become a pilot. It’s a dream of mine.

Fourth. Let’s be honest. There is no way Trump is going to be a good president during the inevitable alien invasion. In the next 12 hours we need to impeach him and put Bill Pullman in his place. This is a multi-prong approach so I’m happy to get on a group chat with you, my friend Jason, a legislative expert you bring to the table, and yourself, tonight. Jason and I will only be able to provide light moral support, and advice on what kind of fae would be hypothetically best to engage with in this situation. Unfortunately, you and your legislative expert will have to do the heavy lifting, but we believe in you. Also. You’ll need to get Bill Pullman on board. However, Jason and I can suggest magical beings who may be able to summon his character, Thomas J. Whitmore, to life. So that’s an option, too.

Well, there you have it. I know this may be coming out of left field, here, but honestly? You’ve had 22-years to prepare for this, friend. Now I know that the likelihood of an extraterrestrial invasion happening tomorrow is slim, but it’s not impossible, or even improbable at this point (we are, after all, living in one of the darkest timelines.) So, you know, you can at least try to address the issue, can’t you? If not, I guess you can join me in rewatching Independence Day tomorrow, but I’m not sure what good that will do if the aliens do decide to invade tomorrow. If they don’t? Well, we got lucky…this time. Take notes when you watch it tomorrow, yeah? We may not be so lucky next year.