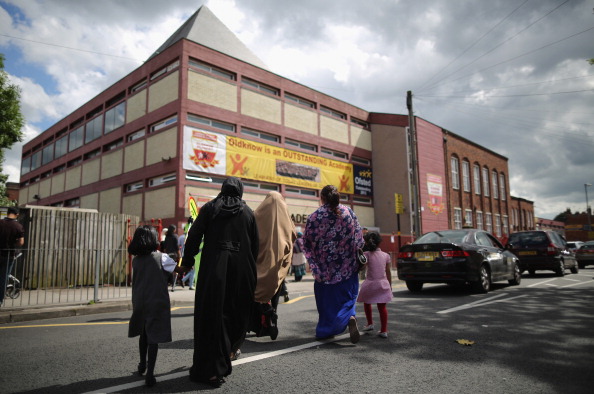 I didn’t set out to listen to all eight episodes of Serial’s latest podcast The Trojan Horse Affair in under 24 hours, but I couldn’t bring myself to turn it off. Did I take twice as long to make dinner and volunteer to clean up the dishes and run errands around the city so I could continue listening? No, of course not. I’m just a good father! I would do anything for my family (as long as they are quiet and stop bothering me so I can finish the damn podcast!)

The Serial podcast (now owned by the NYTimes) and its offshoots have had a terrific track record (save for that Bowe Bergdahl second season) from Nice White Parents to S-Town to the incredibly compelling third season of Serial, in which Sarah Koenig embedded herself in a Cleveland court for a year to examine the failings of the criminal court system. The Trojan Horse Affair, however, is the first season since the first — the true-crime investigation of Hae Min Lee’s murder — that stuck its claws in me, and that enraged and enlightened me in equal measure.

If you’ve never heard of The Trojan Horse Affair, don’t worry. You’re not alone, at least if you live in America. In short, it involves an anonymous letter — a hoax — that upended an entire school system in a predominantly Muslim area in the second largest city in the UK and led to the sacking of several teachers and other educators who had otherwise proven to be remarkably effective. Is there racism and Islamaphobia involved? Yes, yes there is. But there’s also a surprising number of twists and turns, incompetence, indifference, a “nice white lady,” and, as it turns out, more than one fake letter and a conspiracy wrapped in a conspiracy.

The gist of the story is this: After years of underperforming and failing schools in an area of Birmingham that is 98 percent non-white but taught almost exclusively by white teachers, a Muslim principal is brought in. Instead of rejecting the identity of the students — most of whom had descended from Bangladeshi, Pakistanis, and Indian families — this principal embraced their identity. He incorporated it into the school. More non-white teachers were recruited. Daily Christian prayer was replaced by daily Muslim prayer (there is no division of church and state in England). The students, instead of feeling rejected by racist teachers who condescended to them, responded well to educators and a cultural environment that met them where they were instead of constantly reminding them that they didn’t belong. At one school, the graduation rates improved from 4 percent to a whopping 71 percent.

Then, in 2013, came the Trojan Horse Letter. This letter, written anonymously, suggested there was a conspiracy afoot to bring in Muslim teachers and introduce conservative Islamic rules and radicalize students in anti-western, fundamentalist ideologies. The letter was leaked to the press and set off a firestorm in the UK. An investigation ensued. The conservative government and Parliament got involved (including Michael Gove). After the investigation and the public outcry, many of the very educators responsible for the rapid improvement of those districts were fired and graduation rates soon thereafter dropped.

What no one ever really explored, though, was who was behind the anonymous letter. That’s where Serial comes in. Brian Reed (S-Town) and Hamza Syed, a graduate student from Birmingham writing his thesis on The Trojan Horse letter, set about to find out who was behind the letter. It is a wild journey because not only did the people in power not want to know who wrote the letter but they didn’t want anyone else to find out, either. People within the school district, the city council, and the national government go to lengths to keep Reed and Syed from finding out. They stonewall them. They lie. They refuse to talk to them. They issue threats.

It’s not just a matter of what they’re hiding, either. It’s why they’re hiding it. Finding the author of the letter — and that person’s motive — threatens to undermine the decisions the city made to undo all the good work that had been done in the school system. It’s frustrating, enraging, and fascinating, and the theory behind who wrote the letter that Reed and Syed settle upon but cannot definitively prove is the last person you might think.

What makes it doubly compelling is that this is Syed’s first story. He’s learning on the job, and as a person of color from Birmingham, he sometimes has difficulties remaining objective, understandably so. By traveling and working with Syed, Brian Reed also sees firsthand what it means to be a person of color trying to interrogate authority figures, and so it ends up being an illuminating experience both personally and professionally for them. The same can also be said for the listeners. Indeed, for a podcast about a goddamn letter, it is a surprisingly gripping, tense, and suspenseful podcast that is almost impossible to turn off. It’s a good thing all eight episodes are available now.