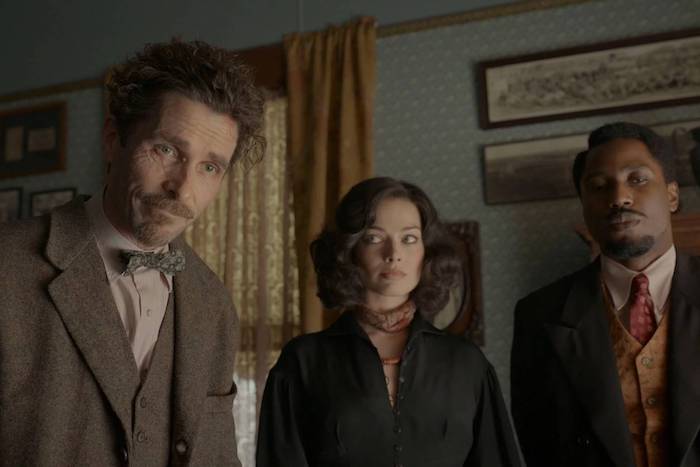 Even when David O. Russell is at his best, he’s the sort of filmmaker whose projects work in spite of his quirks almost as much as because of them. He wears an oddball, meandering sensibility as a style choice, perhaps most effectively to date in Silver Linings Playbook. However, particularly in hindsight, it is also clear to see how such an “aesthetic” can, under the right conditions, work well to hide what is perhaps a fundamental inability to edit his own ideas. Even when Russell has good ideas, he has a track record of wildly inconsistent execution. For instance, finding a muse in Jennifer Lawrence—a remarkable talent with fantastic range and a whopping screen presence—and then repeatedly casting her in roles so obviously intended for women significantly older was downright distracting, without even addressing the egregious ageism of it all. Still, for his weaknesses, his strengths, and particularly his knack for assembling stellar casts, have won out on some memorable occasions in the past.

The present, however, is another matter. Russell’s new film, Amsterdam, feels like the weaknesses underlying all of his earlier works laid bare, fully exposed, without good ideas to hide behind because, quite frankly, there aren’t any real ideas here to speak of.

Primarily taking place in 1933 with extended flashbacks to World War I and the years immediately following, Amsterdam follows the misadventures of best friends Burt Berendsen (Christian Bale), a rough-spoken but warm-hearted surgeon, and Harold Woodman (John David Washington), a wooden lawyer. (Note: the “wooden” of it all might reflect execution more than intent.) In the “present” day storyline, the friends find themselves entangled in a conspiracy behind the mysterious death of their former WWI commander turned senator Bill Meekins, orchestrated by unknown malcontents who promptly frame the best friends for murder. Their efforts to unravel the conspiracy and prove their innocence by unmasking these villains reunite them with their former friend and Harold’s “one who got away,” Valerie (Margot Robbie). Meanwhile, flashbacks detail how the trio met overseas during WWI in an incredibly convoluted storyline that results in them all moving to Amsterdam together for quite some time before abruptly parting ways (again, for fiddly reasons not worth parsing here).

Amsterdam, as you may know, is a place in the Netherlands, but this film seems to imply that it is, more importantly, a state of mind. What state of mind I could not tell you. The central trio just say “Amsterdam” soulfully and directly to the camera in a haphazard montage at one point like it’s supposed to mean something profound. There’s a heavy dose of overly broad, cloying commentary on friendship and love and want vs. need, so perhaps that’s the ticket, but if a film can’t be bothered trying to convince me to care there’s only so much time I’m going to spend ruminating on it.

Watching Amsterdam is like when you accidentally make eye contact with a shifty guy in the subway car rambling a manifesto to himself and he interprets that as you accepting an invitation to join his congregation. Perhaps you nod at what you hope are the right points because this person is clearly not in a good place and you don’t want to set them off, but the sermon makes no sense; it’s just a jumble of Big Ideas awkwardly twisted together in a confusing storm of run-ons.

The narrative structure here is generally inexcusable; a few of the liberties taken are genuinely amusing but the vast majority are empty flourishes that are like trying to fix internal hemorrhaging with a band-aid. A painfully heavy-handed use of voice-over from multiple characters throughout cycles between stating the obvious, repeating the already said, and making grand metaphysical conclusions that the film itself has done little to nothing to develop, or even establish.

Only, in Amsterdam, the incomprehensible word salad of Big Ideas in nonsense patterns purporting to explain the meaning of life is not coming from some unwell stranger on public transport, but out of the mouths of a veritable who’s who of A-listers. Beyond the starring trio of Bale, Washington, and Robbie, the all-star ensemble includes Chris Rock, Zoe Saldana, Andrea Riseborough, Rami Malek, Michael Shannon, Anya Taylor-Joy, Taylor Swift, and Robert De Niro.

Bale fully commits to the bit (as usual) as the bumbling, grumbling Burt; half grouch half attempted Groucho Marx, Burt is an uneven chimera who, in spite of Bale’s efforts, never congeals into a fully coherent person. Robbie, grippingly dynamic as always, manages to imbue a maniacally manic pixie dream girl of a role with some glimmer of grounded humanity in a nearly miraculous display of talent. Valerie, a rebellious socialite/war nurse/multimedia artist of a Dadaist bent (stripped of any meaningful context or specificity or the notion that this was a whole movement and not just one woman’s flight of fancy) is still an eye-roll of a character, to be clear. Robbie’s performance just makes her far more bearable to watch than she has any right to be.

And then there’s John David Washington. Oh boy. Look. I feel like we’ve all been dancing around this for a bit now and it’s time to just address the elephant in the room because it’s taking up a lot of space: this man cannot act. He inherited the face of a movie star from his supremely talented father, but winning the genetic lottery only goes so far; there is absolutely nothing behind his eyes. If it’s the right role and a really solid script and he doesn’t need to bring anything to the table besides showing up and delivering the lines (e.g. BlacKkKlansman) he can do fine. But that’s the max capacity we’re talking about here. And, as mentioned, Amsterdam is not a solid script; it’s a stale word salad dressed with delusions of grandeur.

Washington’s performance is so stiff it’s like watching a talking mannequin. Taylor Swift is notably even more awkward in her supporting role, but as opposed to Washington who is in more scenes than he is not, her presence is blessedly brief, and her exit is a highlight of the film. Still, between this and Harry Styles in Don’t Worry Darling perhaps it might be worth putting at least a temporary pause on the whole “casting pop stars” thing because it’s not going all too well.

Not only is Amsterdam easily Russell’s worst film to date (barring the disaster that was Accidental Love), but it also marks a more shocking career low for cinematographer Emmanuel Lubezki. This film shows no discernable signs of the innovation and attention to detail that usually mark the work of the Oscar-winning DP behind some of the most visually stunning films of the past few decades, from Children of Men to The Tree of Life. Visually, Amsterdam is a yawn of boredom pushed over the line from dull to outright bad by an over-commitment to an aged sepia tone that makes the film look jaundiced.

Amsterdam is a mess and lacks the common courtesy to at least be an entertaining one. It’s the sort of film that begs the question of just how long some past Oscar nominations can insulate a white man from a cooling track record topped off by a colossal flop and, let’s not forget, a ridiculously long list of allegations of truly heinous behavior both on and off set.

Amsterdam is now playing in theaters.