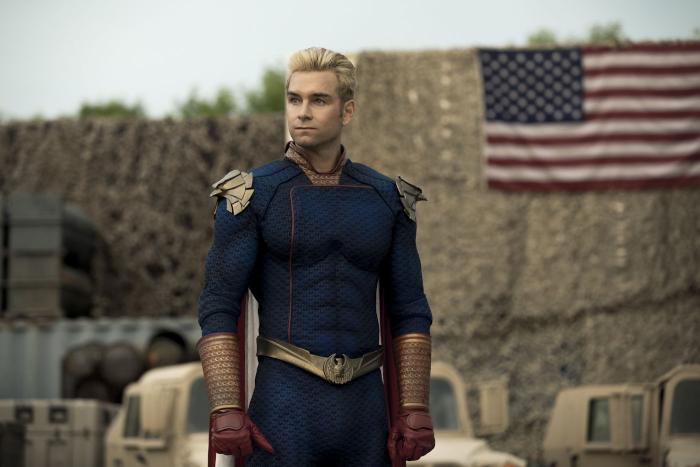 'Lightyear,' 'The Boys,' and How to Start a Fake Culture War

Over the past week, I watched two major pop culture properties become wearily inevitable targets for the kind of bad-faith discourse that has polluted my occupation for several years now. Fans of Amazon’s The Boys, a scathing satire of superhero stories and corporate culture, seemed aghast that this deeply political show had become, uh, political. Around this time, as we all guffawed at the Reddit screenshots, the usual suspects started ranting about Lightyear, the Pixar sort-of prequel to Toy Story that focuses on the origin story of the action figure. Right-wing rabble-rousers like Patricia Heaton tried to start drama over the decision to cast Chris Evans as this take on Buzz Lightyear over the original voice, Trump supporter Tim Allen. The tedious claims of wokeness and cancel culture were invoked for everything, including a very brief gay kiss that saw the film banned in Saudi Arabia. The movie’s soft box office opening from this past weekend inspired further smarmy nonsense, but mercifully, it hasn’t gained as much traction as stuff like this often does. Perhaps we’re all too exhausted from the heatwave to care.

I bring these two examples up, as minor and entertaining as they are, because they ended up perfectly embodying the obvious artifice and ignorance that has been maintained the past few years of trumped-up fury over entertainment. We’ve all watched on wearily as pop culture became the default battleground for the current force of right-wing, anti-inclusivity fearmongering that opened the doors to a rabbit hole of radicalization. Films, TV shows, music, and so on have always inspired a certain sort of fervency, a deeply emotional investment encouraged by marketing. I’m not sure we’ve ever had a time when such things haven’t led to well-crafted hysteria. Consider the Satanic Panic over the ’80s targeting horror movies and rock music, or the Catholic League picketing Hollywood way back in its infancy. For as long as art has existed, someone has tried to ban it. Our current era isn’t new, but it does feel more immediate, tied to the rising anti-queer and racist tide that has permeated political power on both sides of the pond.

It’s easy to get people wound up over pop culture. It seems so low-stakes yet enticingly comforting in its ability to comfort and inspire us. We’re hardwired to defend the things we love, taught to believe that they are extensions of our very selves. I’ve witnessed more than my fair share of fandom wars to know how messy this mindset can get, and I’m not immune to it myself. Nobody is. That seemingly minor sensation is scarily easy to wield as a weapon. When you’ve been trained from birth to view certain corporate entities and their highly profitable IPs as ‘your childhood’, breaking away from that idea is often easier said than done, especially if you’re used to being exclusively pandered to by these brands. Remember the fallout from 2016’s Ghostbusters reboot and how quickly that perfectly fine film was swarmed by misogynists and racists and their fake fury? That bigotry became impossible to ignore because it was amplified by the same shameless careerists who had turned hating Anita Sarkeesian into their full-time job. They saw an opportunity and they took it, and plenty of creeps latched onto them to give their ‘movement’ the vaguest sheen of legitimacy.

The pattern is obvious once you notice it: take a pop-culture property with at least some mainstream appeal, latch onto a minor detail involving diversity, shout about how it’s yet another example of the vague concept of ‘wokeness’ or ‘cancel culture’, and tag in a few bigots or Elon Musk for extra promo. Make sure to use a lot of words like ‘erasure’ of whiteness or heterosexuality, and big up the frequently refuted delusion that Hollywood is an uber-liberal paradise that forces poor oppressed racists to censor themselves. Maybe throw in some incendiary claims about child grooming and critical race theory to seal the deal and guarantee some QAnon support. Lather, rinse, repeat.

I saw a Daily Mail headline recently — because of course it was them — that claimed British builders were going WOKE (their capitalization) because many tradesmen were now discussing their feelings with colleagues and shunning greasy fried breakfasts. We know that the appropriation of ‘woke’ to now mean ‘anything vaguely diverse’ was always a dog-whistle sham, but seeing it applied in such an evidently ridiculous context only emphasizes that. ‘Woke’ and ‘cancel culture’ and ‘culture war’ are meaningless terms, barely legitimate covers for wannabe provocateurs who are mad that they can’t say the N word on stage. When even eating well and being open with colleagues is positioned as something damning, you have to wonder what kind of future these people want for us.

As with all culture wars, the goalposts are always moving. The targets change, sometimes flipping from fine to abhorrent for no other reason than it’s convenient to do so. The smallest of details are elevated to criminal status, and the targets are predictably marginalized voices and individuals. A half-second gay kiss is ‘wokeness going too far.’ A Black woman in a story about space wizards with laser swords is unthinkably evil. A female protagonist of any kind elicits abject fury. There’s no reason behind this hate, not that reason would justify it. The aim is to destroy progress in all its forms. If that weren’t the case then we wouldn’t see the likes of Joe Rogan, Ben Shapiro, and the chucklefuck GOP congressmen of the week latching onto these moments with practiced zeal.

They don’t want to see queer people existing. They don’t want to see people of color existing. They don’t want to see trans kids living. They don’t want to see toxic masculinity be challenged in any shape, way, or form. When the most audience tested, watered down and corporate mandated forms of entertainment we all consume reflect even the tiniest signs of progress, it’s seen as ‘going too far’ and must be stomped out of life immediately. It may not seem like much to many at first because hey, it’s just a movie, right? It’s no big deal. But we all know the road it’s leading towards. That’s why I felt the need to write this piece, to note how blatantly flimsy the theatrics are when they fail, yet remain so potent when there’s a real force behind them. Calling it out isn’t easy when the other side reject reason and exist only to hate, but it still feels worthy. This won’t stop anytime soon, especially as conservative politicians target trans kids, book banning has come back in style, and Black educators are stalked over ludicrous fears of critical race theory. These are the punching bags that rile up the most violent people in our society, all of whom are buoyed by a media landscape that won’t condemn the rising ride of fascism. Pop culture is but one of their chosen battlegrounds. It may fail once or twice but its success rate is shockingly high, and that should worry us.

← Twitter Users Ponder Scams That Have Become So Normalised People Don't Even Notice Them Anymore | Review: In 'Good Luck To You, Leo Grande,' Sex Is Only The Beginning →