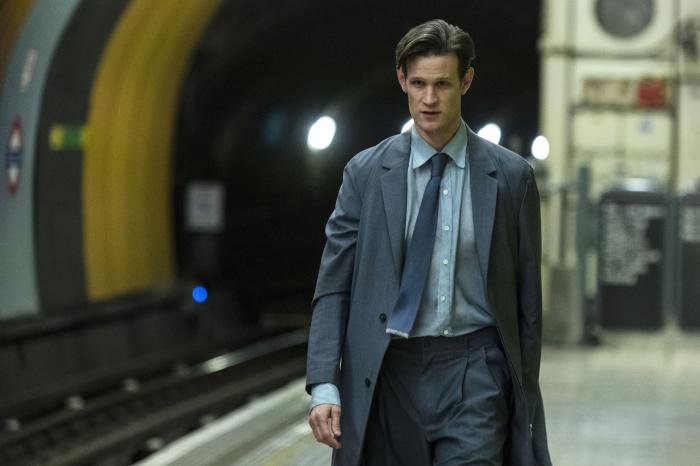 There was a moment during Morbius when I sat in the theater and thought to myself, “Gee, this might not be so bad after all.” I pulled out my phone and checked the time, and it was around the 30-minute mark for the movie. You see, the first act is confident, expedient, breezy — not artful but at least skillful in its execution. It’s the kind of first act that lets you know you’re in for a tight 90-minute joy ride that doesn’t take itself too seriously, something almost unheard of in comic book movies these days. Instead, it plays like a conscious throwback to those ’80s sci-fi action flicks that didn’t care whether you BELIEVED cops could be robots or robots could be time-travelers, it just needed you to know that’s what’s going on. Here, it’s laying out the fact that Michael Morbius is a doctor with a rare blood disease and he’ll do anything to find a cure — even if that includes experimenting with vampire bat DNA.

The fact that the first act is almost clinically precise and the fact that the rest of the movie spins wholly off the rails is probably due to the same root cause: Somebody (Sony) obviously played Jenga with Morbius during the edit, sliding out chunks of plot and hoping the overall structure wouldn’t crumble. I know it happened because the actors have talked about scenes that wound up on the cutting room floor during interviews for the movie, but that’s not unusual. It’s also not usual for early trailers for a movie to feature a shot or two that doesn’t make the final cut. You know what is unusual? A trailer that features at least TEN scenes that aren’t in the movie. I counted! For reference, here’s the trailer:

Aaaaand here are the moments that are not in the version of the film I saw last night, at least as far as I recall:

— A detective played by Tyrese says that Morbius has been missing for two months (that dialogue is referencing a sequence of events that plays out differently)
— Morbius tests his strength against something that looks like a tomb (I think it’s just a desk in the movie)
— Morbius and Jared Harris on the bench
— Cops in the woods (Tyrese has a metal arm?! WHO KNEW!)
— Spider-man “murderer” poster
— “You and I should stay in touch” - Michael Keaton as Adrian Toomes/ The Vulture
— “You save lives, you don’t take them” - Tyrese
— Girl in hospital with a tear on her cheek
— “Are you here to heal the world, or to destroy it?” - Jared Harris
— Venom joke ends differently
— Even the title treatment changed

Are all of those big, pivotal moments? No. But it hints at a lot of connective tissue that was stripped away (almost everything with Jared Harris and Tyrese is gone) to streamline the narrative and simplify this introduction to a complicated Marvel character — a villain who sometimes does good, or a good guy who is often really, really bad. If it was done with a clear vision of who Morbius should be in this movie, it could work! But I have a sneaking suspicion it was done not to serve the character, but to make the character serve their growing Spiderverse franchise (as a few specific trailer changes, in light of No Way Home, seem to verify). It’s all just some real filmmaking-by-committee sh*t, so much so that I’m loath to even drag in the names of director Daniel Espinosa and screenwriters Matt Sazama and Buck Sharpless, who I’m sure all tried their very best.

Anyway, the committee approach works in the first act because the backstory is more or less concrete, by-the-numbers, “this is how Morbius became a monster” stuff: Michael Morbius (Jared Leto) grew up in Greece, in a hospital catering to children with rare, life-threatening blood diseases. There he’s under the care of a doctor played by Jared Harris, who I’m sure has a character name but I cannot for the life of me remember it nor do I care to look it up. He also befriends another boy he calls Milo, who has the same illness and grows up to be Matt Smith. Michael becomes a genius doctor and medical researcher, who invents an artificial blood formulation (and rejects a Nobel Prize for the effort) on his path to finding a cure for his and Milo’s affliction. He goes to Costa Rica to trap some vampire bats to study, and eventually devises a cure that splices whatever part of their DNA creates anticoagulants into human DNA. In a hurry to perform a human trial he sets up a lab on a freighter in international waters with the help of his research partner/love interest, Martine (Adria Arjona), and proceeds to administer his new cure on himself. And it works! Sort of! It, uh, makes him into a vampire. But like, a living one. Other than that he’s hale and hearty and a little bit murdery. In the confusion of his transformation, Morbius kills everyone on the ship except Martine, then escapes. And that’s when the movie starts to lose its focus.

Morbius doesn’t want to be a murderer, but the fact remains that he has to drink blood to maintain his health — and his artificial blood formula only cuts it for so long. Despite all of his new-found powers (strength, speed, echolocation, etc.) the price isn’t worth it, so Morbius prepares to find a cure for his cure — but then Milo shows up and steals the vampire serum because he’d rather be a healthy monster than a dying human. Milo, by the way, is very loosely based on the Marvel character called Hunger, mixed with a few other people. The rest of the movie is a sort of half-baked cat and mouse game between Milo and Morbius, where their motivations are barely sketched. Milo wants to goad Morbius into enjoying their new life as vampires rather than trying to reverse the cure, I think? And to do that he, uh, frames Morbius for a bunch of murders and also tries to kill everyone he loves? And Morbius just reacts the whole time, running and hiding and science-ing until the big climax. The end.

For a character being set up for future appearances, Morbius isn’t all that compelling — though I’m hard-pressed to lay that blame on Leto’s performance. His offputtingness works fine for a character who is supposed to be exactly that. The issue is more that the movie treats him as the hero even though he is being set up to be A VILLAIN in the future, and can’t thread the needle. He could have been a noble monster — a man who can’t help but kill, but regrets it — and it might have worked. But besides that one moment on the boat, the movie refuses to let Morbius get his hands dirty, or finds a way to justify every questionable decision he makes. The result is a character who isn’t so much morally gray as too ineffectual to root for, and not bad enough to root against.

The other problem is that Matt Smith is RIGHT THERE, bursting at the seams with fun and charisma, and everything else suffers in comparison. I have a pet theory about Doctor Who actors, which is basically that a good Doctor is someone who would be better suited to play the villain in any other property (see: Eccleston, Capaldi, even Tennant when he’s feeling frisky). Smith’s Milo could be Exhibit A for my argument, and the fact that he manages to not just steal the spotlight but BE the spotlight in this otherwise drab movie is all the more impressive because his character is practically nothing — a completely disposable entity. He still suffers from the same lack of logical motivations and connective tissue that plagues the rest of the film, but because the stakes are lower there’s some actual freedom for him to take advantage of. I can’t speak to the scenes of his that wound up on the cutting room floor, but the stuff that remains is easily the best material the movie has to offer. He makes ugly knits and New Balance kicks look like designer duds, he does a straight-up Keyser Soze transformational walk, he dances around without his shirt on, he even pulls off a cheeky Doctor joke of his own (“On a scale of one to ten, how bad is your pain?” “ELEVEN”). He simply comes into every scene like he’s having the time of his life. If only the rest of the movie could say the same.

The action and special effects are a mixed bag, and again seem to have been tweaked between the trailer and the release. There’s something interesting there, in the way the movie tries to depict the unusual bat powers — though the speed just makes the characters look like smoke, and the echolocation just makes the world look like smoke, and also I think there’s something to do with wind currents and hollow bones but it’s not really explained. Sometimes the slo-mo effects in the action look great, and sometimes it all is an indiscernible blob. The bigger issue is that the transformation effects to turn Morbius and Milo into their monstrous selves are inconsistent. The practical effects work well but are rarely used — probably because they don’t make the characters look comic booky enough. So then the CGI comes in when they’re really vamping out, and it’s just terrible. And all the while you’re looking at Matt Smith’s cheekbones and thinking, “Just give that man some contact lenses and fake teeth, he’s already BUILT FOR THIS.”

I could go on, but unfortunately to get at the heart of Morbius’s ultimate failure I’ll have to dig into some larger franchise spoilers, so I’ll save that for a later piece (that will also cover the two end credit sequences). Ultimately I’ll say that the movie wasn’t the trainwreck I was expecting — it wasn’t irredeemably bad. It was almost even sorta good, for a few minutes at least, and Matt Smith’s performance single-handedly makes this one a worthwhile “get drunk and watch it on cable” flick. But I’d rather see a flaming disaster from a team of passionate creatives than a sanitized jigsaw puzzle assembled by a board of directors any day.