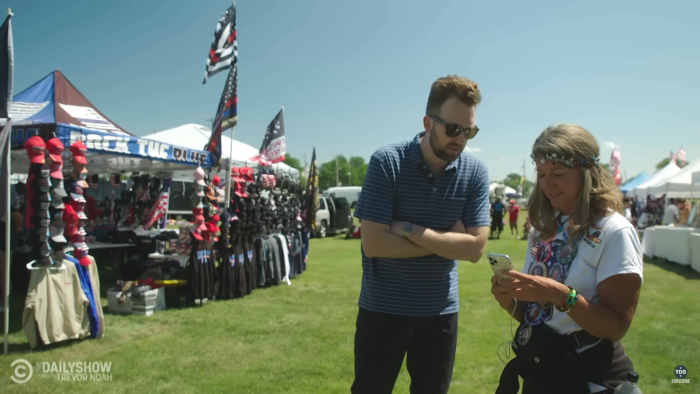 Why Does Jordan Klepper Do this To Himself?

Jordan Klepper gets paid for what he does. There is a level of fame that comes along with it as well. He’s a network star (albeit during a time when that title is becoming less and less secure). Yet, the question remains: Is it worth it? Are the fame, money, and recognition worth having to talk to an evergrowing slew of maniacs who pray at the alter of Donald Trump? To dust off an old favorite: That’s gonna be a no from me, dawg.

It’s clear Klepper hasn’t lost his skill in dealing with people at Trump rallies. His ability to ask the right question is finely tuned. He can make one of Trump’s many sycophants contradict themselves with ease. The snag is, that doesn’t matter to them. They wear their hypocrisy proudly like a badge of honor. The crazier a person he finds, the more proud they are to be wrong, lying, or both.

His latest trip to Wisconsin produced some of the craziest interactions he’s ever had. This is saying something, as he was at the Capitol on January 6th. In Wisconsin, he finds Qanoners, people who don’t understand what irony is, and numerologists! Things get even more chilling when one conversation plays out all while “Son Of A Preacher Man” can be heard in the background.

But Klepper handles them all. Maybe not with ease, but definitely with the aforementioned skill. He’s not changing anyone’s minds. So why subject himself to something like this? Only Jordan Klepper knows the answer, as soon as he types it into his Gematria Calculator.

← This Is Why J. Smith-Cameron Threw a Drink in Kieran Culkin's Face | Patton Oswalt and Marc Maron Discuss Dave Chappelle →