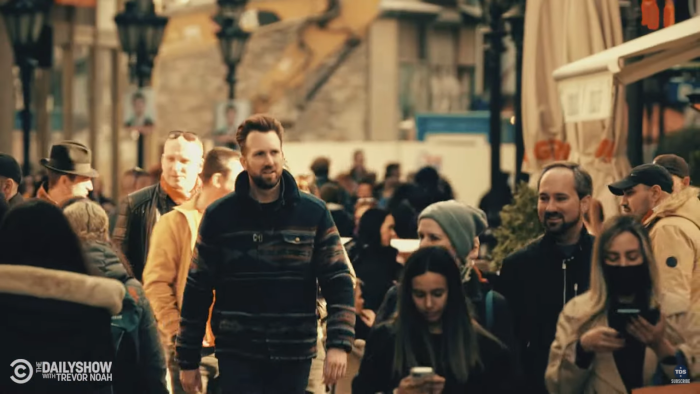 Jordan Klepper Exposes The Frightening Similarities Between Hungary And America

People on the far right often accuse others of doing things they are guilty of themselves. They claim companies like Disney are indoctrinating their children. Meanwhile, they are attempting to ban books that teach subjects they don’t like. They accuse Joe Biden of being some sort of power-mad dictator. This was before, during, and after their likely 2024 candidate attempted to overturn a free and fair election that he lost. Unfortunately, none of these tactics are going away anytime soon, and if we look to Hungary as an example, things could get worse before they get better.

Jordan Klepper, the man who subjects himself to all manner of far-right acolytes, traveled to Hungary. His goal was to explore the far-right influence in that country. What he found is a climate that is terrifyingly similar to the one we have here in America, albeit much worse. In Hungary, Prime Minister Victor Orbán is in charge. As Klepper points out, Orbán was once referred to by Steve Bannon as “Trump before Trump.” So, yeah, that’s what we’re dealing with.

Orbán may be a proto Trump, but he’s more successful. The Prime Minister has been in power for 12 years, after losing two prior elections. He lost because the media portrayed him how he is. So what did he do when he gained power in 2010? He fundamentally changed the way Hungarian media operates. Now, news in Hungary is state-run. All Orbán, all the time.

One of the most frustrating things about Hungary’s far-right contingent is that some of them act as if they are toeing the line. When asked about LGBTQ+ rights, which have been all but stripped away in Hungary, a local citizen claims that it is a personal issue. They think people can be gay but should keep it to themselves. In other words, people in the LGBTQ+ community are not able to get married or adopt children or, essentially, be treated as equals.

In regards to Putin’s invasion of Ukraine, Orbán’s own representative admits that they acknowledge Putin as the aggressor. They have even accepted Ukrainian refugees with open arms, despite closing their borders to Syrian refugees. They also claim that they still don’t know whose fault the whole thing is. The rep presents the idea as diplomatic, but when you look at how much Orbán loves Putin, it’s pretty clear what is going on.

Members of America’s far-right feel inspired by Hungary. They were championing the country at CPAC of all places. That’s how this special was born. We may get lucky, and avoid a fate as dire as Hungary’s. But it won’t be for like of trying on the side of the far right. People who don’t want every news outlet to be FOX News are just going to have to try a lot harder.


← Cry Valhalla: 'The Northman' Is Here To Whisper-Scream Us Tales Of Gore | 'Atlanta' Recap: 'White Fashion,' The Episode That Promises Racism Will Be Over By 2024 →