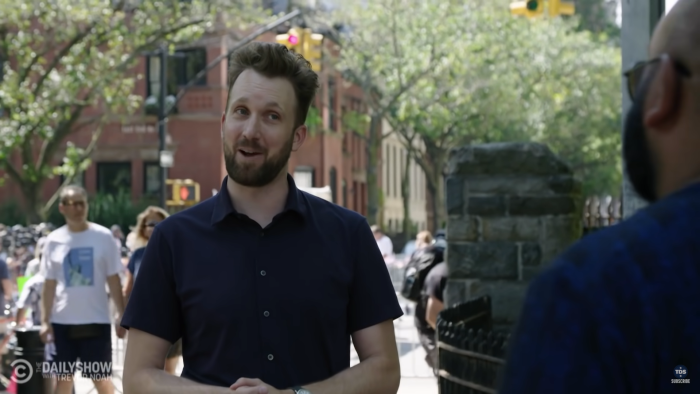 Did you know that ‘Ice Ice Baby’ started as a b-side? It’s true! Vanilla Ice’s hit song started as the extra bit you got if you bought his lesser-known ‘Play That Funky Music’. The world almost didn’t know that Ice ripped off Queen and David Bowie until, one day, a DJ flipped the record around. Jordan Klepper just dropped his own set of b-tracks, and they are as detrimental to society as ‘Ice Ice Baby’ was.

Klepper is well known for attending rallies where people need to hear their hatred, or in this case, ignorance echoed. At this point, I’m shocked that Klepper hasn’t aged into dust because of it. He’s faced with some of the least empathetic or stable people America has to offer. However, sometimes six minutes isn’t enough, and things get left on the cutting room floor. So Klepper and the people at The Daily Show have dropped a new video filled with Anti-vax nonsense that didn’t make it to air. Thank you?

You can see why some of these interview pieces didn’t make earlier cuts. They tend to be a bit more frantic, and confrontational than usual, which is saying something. Klepper doesn’t avoid confrontation, but it’s only good if it’s productive. In this video, people are more curt or off message or comparing themselves to MLK. They can’t eat indoors at a Thai restaurant because they’re a health risk. It’s not as bad as ‘Ice Ice Baby’, but it’s close.

One of the most important parts of the video involves a man who represents the New York Young Republican Club despite looking to be in his mid to late ’40s. The person in question takes a parting shot at Klepper for having contracted COVID at one point. It is the epitome of what most of these Anti-Vax people represent; A basic lack of empathy. Just like Vanilla Ice when he brazenly sampled ‘Under Pressure’ without asking (which, let’s be honest, isn’t even a great song).


← As Omicron Surges, Even Trump Supporters Are Booing Trump for Getting a Booster | Pajiba 10 For Your Consideration: Samara Weaving, Millennial Horror Mistress →