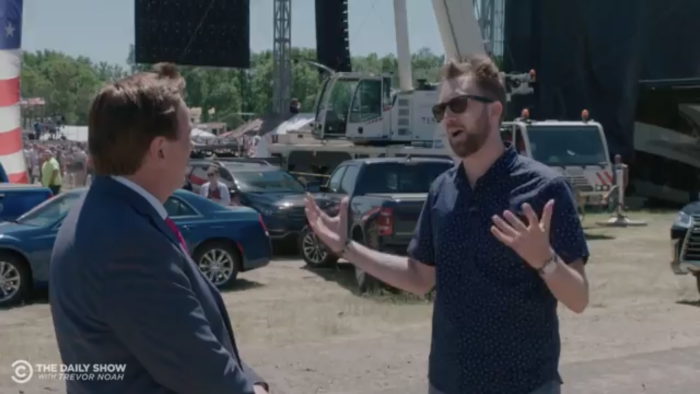 Jordan Klepper Talks To Mike Lindell The Way That Everyone Should

Mike Lindell is one of the still standing, still screaming, Trump loyalists who insist, with no evidence, that the 2020 election was stolen from the 45th president. His methods, tactics, and ideology are dangerous. AND YET, some people have decided to give this person airtime to spout his nonsense, while offering little in the way of pushback. Luckily, Jordan Klepper is out there dooming himself to a thankless task for our entertainment.

For years now (I wanna say 20?), Jordan Klepper has attended Trump rallies to get in the heads of Trump voters. This has gotten him threatened, yelled at, and even got him a front-row seat to the almost coup of January 6th, 2021. Now, Klepper is at it again, attending a rally put on by the MyPillow Maniac himself, Mike Lindell. It’s a doozy.

The people there are about what you would expect, hypocritical, cocksure, and generally uninformed. Like most of these rallies Klepper visits, he’s able to make these people’s “arguments” look as flimsy as one of Lindell’s late-night infomercial foam-stuffed sacks. They still think they’re right, though, so Jordan will keep doing this forever. Hopefully by 2052, when the water wars are in full swing and the Earth is almost done melting, they’ll at least make more sense.

Jordan Klepper didn’t stop at the appetizers; he dove face-first into the main course, snagging an interview with Lindell himself. The pillow-hawking “Mario if he was a deadbeat stepdad” was all too eager to talk, as he usually is. However, something different happened: Klepper did not go easy on him. There was no coddling or hand-holding, only facts and tough questions. Things get so rough for Lindell that at one point he just picks up his ball and goes home. It’s sublime.

Thank you, Jordan Klepper, for treating a dangerous con artist like he is a *checks notes* dangerous con artist. No interview with Lindell should ever do less than tell him he’s attempting to destroy democracy. It’s true and as we saw in this clip, and every clip with ole Mikey boy, he can’t handle the truth.

← Only in Florida: A GOP Congressional Candidate Threatened To Send a Hit Squad After His Opponent | Review: 'Miss Juneteenth' Paints a Rousing, Quietly Radical Portrait of Black Womanhood →