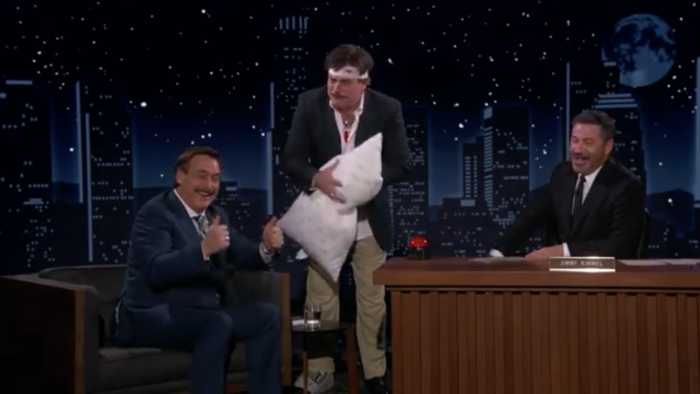 Jimmy Kimmel Attempted To Reason With The MyPillow Guy; It Didn't Go Well

I do think that Jimmy Kimmel had good intentions when it came to interviewing Conservative Conspiracy Theorist and Guy Who Definitely Talks During Movies Mike Lindell. I do. When he announced last week that he would be bringing him on, I wasn’t so sure. But now, I think his intentions were clear. He wanted to have an honest, tough(?) conversation with this controversial figure. Whether or not that was successful is a different story.

For the unfamiliar (which, if you are, honestly just live in that blissful unawareness for as long as you can) Mike Lindell is a pillow salesman, who often had the ear of our 45th President and claims said President was cheated out of reelection due to corrupt voting machines despite there being evidence to the contrary. He has very publicly claimed that he’s being attacked and spied on for his efforts. At the end of the day, it all seems like bullsh-t and for a while, that’s all I knew about Mike Lindell.

That all changed after his appearance on Jimmy Kimmel: Live.

Before I get into Jimmy’s humanization of this, arguably, dangerous man, let’s go to the beginning of the night. Jimmy started with an opening monologue that eventually included his show’s Lindell impersonator, an impersonator who is pretty damn good! When he emerged, sporting a head bandage and dropping Wetzel’s Pretzels all over the ground, I was actually quite hopeful. Lindell was backstage and yet, here they were, actively making fun of him. “All bets are off,” I thought.

That thought was short-lived.

When Kimmel brought Lindell out for the interview, he started by addressing the man’s history with crack addiction. Y’all, I had no idea this was a thing. As I said, I didn’t really know Mike Lindell and I’m sure I’m not the only one. So to kick off the interview, I immediately felt bad for him. I felt bad for this man who may or may not have suggested the former president overturn the recent election via martial law. Jimmy did try to use Lindell’s addiction to find common ground between him and Hunter Biden, who is also a recovering addict, but that attempt was short-lived. Instead, I and hundreds of thousands of people were now given a reason to empathize with a guy we have no business empathizing with.

From this point on, any “tough” questions were soft-balled at MyPillow Mike and he was allowed to be charming. Yeah, I said it. Dude knows how to work a room. “I don’t know a filibuster from a filibuster,” and “I wanna put the R back in Warshington” were just a couple of the friendly, middle America one-liners that he was able to toss out, a smile plastered on his face. If he pushed back against a question Kimmel asked, then they would, mostly, move on. Did Jimmy try? Sure. But it amounted to no more than him giving air time to Lindell’s bonkers claims.

It’s a late-night talk show, not 60 Minutes. How far could they possibly go as far as an interview is concerned? If this wasn’t to really hold Lindell’s feet to the fire, what’s the point? Jimmy likely was asking questions like these because he was quick to say, “I think it’s important that we talk to each other,” which was met by applause from … people who work for him. Honestly, I call shenanigans on that very idea. Mike Lindell is not a man who was looking to have an honest or unbiased back and forth. He was looking to score some public points and look good. Which he did.

At the end of the interview, after Lindell denied and denied and denied, including using the old “those papers I was holding weren’t mine” defense, the Lindell impersonator was brought back out. You know who couldn’t have been happier about that? Mike Lindell. You can see him light up like a kid on Christmas. He loves the attention, likely because he knows it helps him. The interview ends in such a “we’re all just having fun” way I’m surprised no one handed out leis and started blasting a Journey song.

After a whole interview of making him look more … human, they literally put Lindell next to a caricature of himself making him look even more so. I was honestly left mouth agape, asking “Why?” Why expose countless people who may not know this guy from any other mustachioed madman if you’re going to give him the late-night equivalent of a pass? Kimmel, at one point, says he doesn’t think there’s any validity to Lindell’s claims, but honestly, that felt more like an attempt to keep himself from being sued.

This whole thing will just expose people to a version of Mike Lindell that is happy and affable and fun to be around. A little kooky, sure, but no worse than your crazy aunt or uncle. I can’t get on board with that. I’ll attach the interview below. Watch it if you want. If you don’t want to? That’s fine too. If, like me, you’ve never heard this man talk for more than a soundbite here and there, skip it. It won’t do you any good, but for him, it’ll do wonders.

← 'Rutherford Falls', 'Cruel Summer', 'Shadow & Bone', And More On Podjiba! | What Happens When You Fall Too Hard For a Non-Player Character →