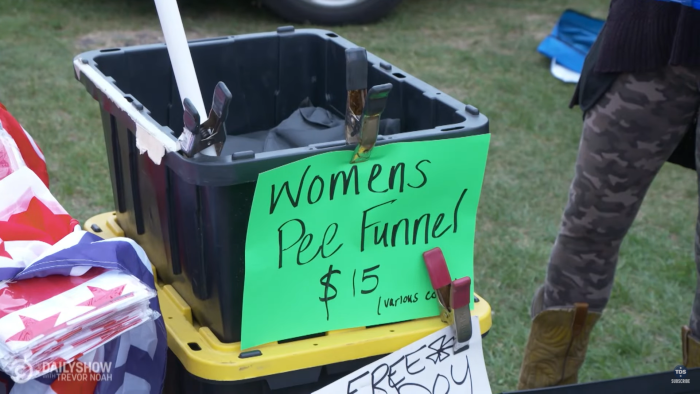 There is nothing that Jordan Klepper hasn’t seen at a Trump rally. From insurrectionists to anti-maskers, at this point, it would be weird if he didn’t see something strange. All of the rallies have a cult-like feel that is actively denied by the people involved. You know, like a cult! People are so eager to defend former President Trump that they manage to make themselves look even more detached from reality. The latest totally normal rally that Klepper attended is a perfect example of how far gone these people are.

Klepper visited Iowa for his latest edition of Jordan Klepper Fingers The Pulse. I can’t say that American flag outfits were mandated, but I wouldn’t be surprised. A flag suit or skirt or bandana is to a Trump rally what a vaccination card is to a FOX News. Mandatory. We also see Klepper greeted by several shirts featuring 45 giving the double middle finger. Seeing as how satire is dead and buried, people wearing these shirts preach civility. Again, completely normal behavior.

Conspiracy theories in this segment are spouted like gospel. Because, like the gospel, these people have a limited understanding of them and choose instead to cherry-pick things that they like. There is a blind devotion to Trump at these rallies. People confidently spout utter nonsense. Then, when challenged with facts or logic, they simply brush it off. They know who they follow and that won’t change no matter what he says. Again, totally normal.

At this point, it almost feels old hat for Klepper. He has developed such a rhythm that allows him to ask just the right questions. He manages to get these people to contradict themselves on national TV, as he always has, and yet, people seem ready to flock to him. They want to defend their favorite liar with more lies. As Matthew McConaughey said in True Detective (I’m going to paraphrase here), “Bullshit is a flat circle.” It just goes round and round until people would rather funnel their pee into a jar than miss a word that Trump has to say.

← First Teaser Trailer for Aaron Sorkin's 'Being the Ricardos', Starring Nicole Kidman as Lucille Ball | A Tale of Two Covidiots →