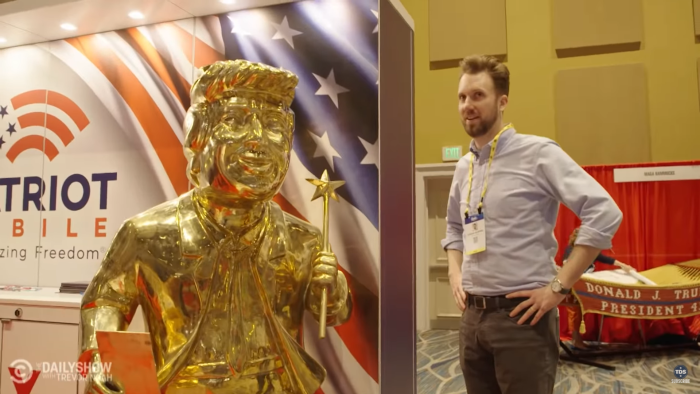 We’ve seen Jordan Klepper tangle with all manner of Trump supporters. He’s tangoed with anti-vaxxers and argued with wannabe pillow salesmen. Every time he subjects himself to these kinds of people, there is a feeling of unease. However, there’s something even more insidious about the crowd he encountered at CPAC. These people attempt to present themselves as professionals, but they’re just as Trump-obsessed and disconnected from reality as their rowdy rally counterparts.

Klepper is no stranger to the Trump crowd. That could explain why this segment has a tinge of “been there, done that.” The talking points may mutate like an out-of-control lab experiment but the impetus remains the same. Some people are trying new arguments and attacking new targets. Others are there to revel in the past. There is an older crowd, but there are also children.

One of the craziest interactions comes when Klepper interacts with a very young man. Klepper makes a joke about him being 15, but I think (hope) he may be older. Picture a child of nine or ten, watching Trump descend on an escalator to announce his run for president. Trump spouts a mouthful of racist falsehoods, and that child gets inspired? That’s some scary s***.

In another strange turn, Klepper found himself inspired by CPAC to take a trip to Hungary! It turns out that the party of Trump is taking cues from a country that is less than democratic. A representative from Hungary even spoke at CPAC and ended his speech with a, “Let’s Go, Brandon!” Fun! Jordan will premiere a half-hour special next week that is certain to be uplifting and reassuring.


← Is This What Florida Is Like? | Ryan Reynolds and When a Commemorative Urinal is Not Place to Pee →