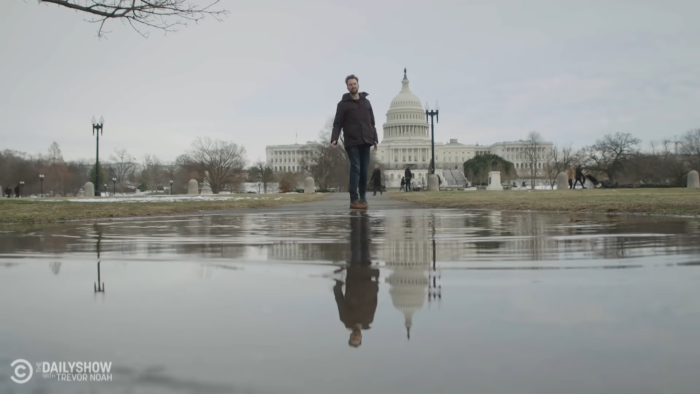 Remember the events of January 6th, 2021? When hundreds of Trump voters stormed the US Capitol with hopes of overturning the presidential election? Jordan Klepper remembers. He remembers because it happened and he was there. Now, Klepper has returned to the scene of the federal crimes. What he found was people looking to condemn the violent insurrection for what it was, and others looking to celebrate it.

In the year since, a lot has been done to downplay the events of that day. Some people, however, have leaned into them. Take far-right mouthpieces and only two people I can say for sure aren’t f***ing because one is much too old for the other, Matt Gaetz and Marjorie Tayor Greene for example. The two sitting members of Congress held a press conference celebrating the “patriots” who tried to overthrow the government. They said they would walk the path that these brave people did! But, like most of what they say, it was all bullshit.

Klepper attempted to speak to Gaetz and probably would have had an easier time had the man currently being investigated for sex trafficking kept to his word. But, alas, as I said in the headline, Gaetz is a lying coward. So he got in his car and drove off like the sniveling little punk that he is.

The rest of the video is one of the more depressing that Klepper has produced. Seeing people act like that day was at all normal is truly dizzying. I remember sitting on the couch, letting my then-pregnant wife sleep, truly wondering if we had decided to bring children into a crumbling world. It was terrifying. Seeing it treated as anything less than that makes me feel ill. When it comes to the insurrectionists, I’d like to quote Representative Ruben Gallego of Arizona who appeared in this very video, “F*** em.”