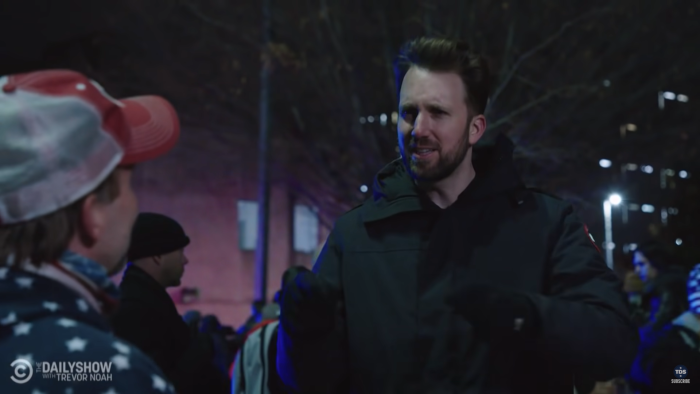 Jordan Klepper has dealt with his fair share of hypocrites. He’s been visiting Trump rallies, anti-vax rallies, the January 6th insurrection; of course he’s run into some hypocritical people along the way. There’s also a lack of self-awareness among the people Klepper interacts with. His visits have produced some jaw-dropping, cringe-worthy moments. However, few come as close as his most recent Web-exclusive.

This segment is basically an “outtake” from his last outing but it’s clear why it needed its own video. Klepper gets caught in a kind of bait and switch that is severely depressing. The person he’s speaking with tells of being part of the Trump “cult.” He talks about sleeping in his car to go from Stop the Steal rally to Stop the Steal rally and now, here he is, wanting January 6th insurrectionists to go to jail. He’s made a change in his life. Then, things take a hard right turn.

I have people in my life who follow Trump. It’s upsetting but there’s always a hope that they will come around. You cross your fingers and your toes and hope things take a turn for the best before you’re stuck talking to them at a get-together (whatever those are). Now and then, strides are made. People come to their senses and they go back to being the person you remember them as. Or, more accurately, things turn out how they do in this video.

Having hope that people will see the light seems almost silly at this point. But, dammit, sometimes it’s all you have.


← Lisa Bonet Won't Follow Jason Momoa Around the World | Alec Baldwin is Being Sued for $25 Million by the Family of a Fallen Soldier. Is This a Case? →