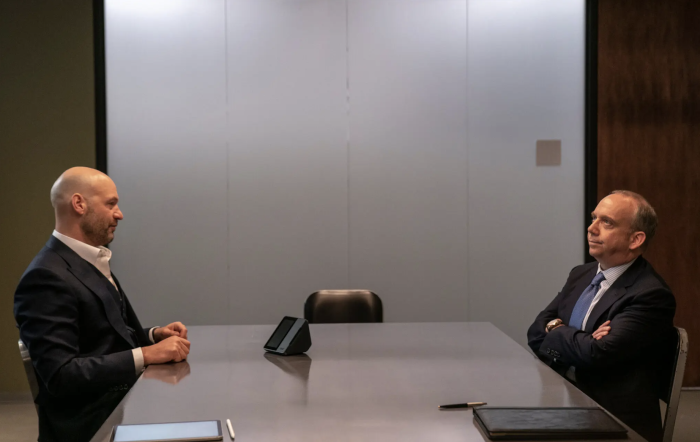 I’m not going to name the musical acts to spare myself from embarrassment, but there are more than a few mediocre bands who recorded their best albums after everyone else stopped paying attention. It doesn’t often happen in television, but I’m the guy who sticks around just in case, whether that means watching 11 seasons of The Walking Dead or Shameless, eight seasons of Dexter, seven seasons of Sons of Anarchy, four seasons of Killing Eve or six seasons (and counting) of Riverdale.

That’s not to say that the sixth season of the long-in-the-tooth Billions is the Fairweather Johnson of television, but I will say this: The departure of Damian Lewis at the end of season five gave it a much-needed kick in the ass. For five seasons, Billions has been a war of attrition between Chuck Rhoades (Paul Giamatti) and Bobby Axelrod (Lewis). Now it’s a war of attrition between Rhoades and Mike Prince (Corey Stoll), the “ethical” corporate raider who ran Axelrod into exile and took over Axe Capital.

The “ethical” part is what has made this season so much fun, because the thing with Axelrod was that he was shady AF, everyone knew it, and the question was: Can he get away with it? After a few seasons of that, though, it felt like Billions was mostly spinning its wheels, moving the pieces around the chessboard until, at the end of every season, either Rhoades or Axelrod would queen a pawn and it would start all over again.
(Spoilers for season six)
In contrast, Mike Prince spends season six adamantly above board, but Chuck Rhoades — as New York Attorney General — absolutely refuses to believe that he isn’t as corrupt as the rest of them, because you don’t become a billionaire by being a good person. Rhoades spends most of the season swinging at ghosts. He wins a few battles, but even in doing so, he feels like the villain, a bully politician attacking a progressive billionaire who only wants to do good with his money. Prince has a very Bloombergian quality about him: If he donates enough of his fortune to good causes, maybe no one will notice he is doing it all to serve his own ego, acquire more power, and amass an even bigger fortune. “We’re going to do it right,” Prince often says, although more often than not he has his right hand, Scooter Dunbar (Daniel Baker), playing the angles behind the scenes.

Essentially, the season plays out like this: Mike Prince decides he wants to buy up a whole lot of land and bring the Olympics to New York City. Chuck Rhoades turns the public against the idea. Prince, in turn, poaches Rhoades’s protege and lieutenant, Kate (Condola Rashad, who receives some much appreciated additional screentime this season) and persuades the Governor to back his bid for the Olympics. Prince eventually wins the bid, but then Rhoades snatches it away from him. Prince, in turn, uses his money, power, and influence to have Rhoades impeached, humiliating and neutering Rhoades until he finds a bully (played brilliantly by Matthew Lillard) that reminds him of why he got into the job in the first place: To (metaphorically) punch bullies in the mouth.

Out of office and alienated, Rhoades uses the last gasp of his power (and some shady tactics) to go after Mike Prince one more time. This is going to sound dumb on paper, but it made for a surprisingly intense finale. Prince decides to use $3.5 billion of his own fortune to personally fund a Universal Basic Income for the entire state of New York (but only after Rhoades succeeds in thwarting Prince’s attempts to make New York taxpayers foot half the bill). “Mike Money” (terrible name) is designed to be a launching pad for Prince’s run for the Presidency.

Rhoades, obviously, doesn’t trust it, and he does some sleuthing of his own. Using a fake warrant and an illegal seizure, Rhoades manages to obtain 12 hard drives, which Rhoades alleges contain crypto that Prince is going to use to pay for Mike Money tax-free. Rhoades takes it to his successor, Attorney General Mahar (Sakina Jaffrey), who brings Rhoades and Prince into the same room and pits them against each other in a game of chicken: The loser gets arrested.

Wrong. Prince plays it cool, the hard drives and $3.5 billion are lost, and Rhoades is jailed. However, when the AG sees Prince’s knees buckle on his way to the elevators, she knows there is crypto inside. So, she makes an agreement with Rhoades to play rope-a-dope next season by pretending to be a disgraced former Attorney General on his way to the big house all the while he and AG Mahar will be conspiring together to destroy Prince’s presidential campaign. That’s fun.

It’s a good setup for next season. As importantly, the attempt to fund Mike Money illegally with crypto and his shady affair with a subordinate (Eva Victor, doing double duty on this and Super Pumped) reveals Prince for who he actually is: A shady motherf*cker. Even David Costabile’s loutish, corrupt Wags is like, “At least Axe was honest about being shady.” By hiding behind the facade of ethics and morality, Mike Prince proves himself to be even more of a villain than Axe.

Billionaires are bad. All of them. No exceptions.


← Review: Is 'Ambulance' Good or Do We Just Miss the Bayhem? | Britney Spears Is Pregnant. Strap In →