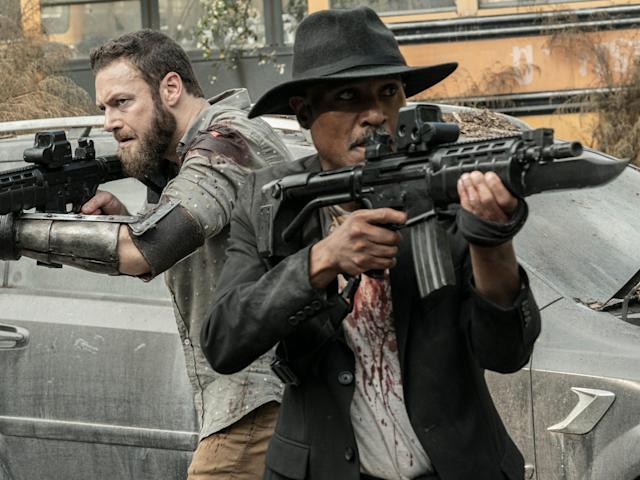 This week, AMC aired the final season’s second midseason finale for The Walking Dead (the final season has been broken into three parts, and this episode was the final episode in the second part). All things considered, it’s not a bad episode: Daryl’s ex-girlfriend, Leah (Lynn Collins!), enters the picture working as an assassin for The Commonwealth’s rogue right-hand, Hornsby, and tries to take out Maggie. Maggie, knowing that she’s being hunted, leaves her son, Hershel, under the care of the man who killed his father, Negan, whom Maggie has decided that she trusts (she says something like, “I will never forgive you, but I trust you now”).

Between them, Maggie, Aaron, Daryl, and Gabriel take out a lot of Commonwealth soldiers; Leah abducts Maggie, but Daryl kills Leah before Leah can kill Maggie; and one of Daryl’s bullets glances Hornsby’s cheek. Maggie’s crew loses one red shirt (RIP Marco), but the rest of them escape. However, Hornsby takes control of Alexandria and The Hilltop on behalf of The Commonwealth.

There are only eight episodes left of The Walking Dead now, and it has become abundantly clear that AMC and The Walking Dead universe have completely scrapped its broader plans. At some point, there was an idea that storylines from The World Beyond would merge into The Walking Dead’s final episode and crescendo toward the much-talked-about Rick Grimes movie or movies.

Whether it was the pandemic that killed the momentum, or it was the complete lack of interest in The World Beyond, it’s clear that none of that is happening now. The implications of the broader universe have been scrapped, and instead of crescendoing into a feature film, it appears that Angela Kang is gonna stick largely to the source material and duct tape a finale together with the pieces that she has left. Instead of a big movie at the end of this, viewers are going to get more spin-offs (one centered on Carol and Daryl, another on Maggie and Negan, as well as a The Walking Dead anthology series, which may answer some unresolved questions). Fear the Walking Dead, meanwhile, is just going to continue to do its own thing in its corner of the universe. It’s not going to intersect with The Walking Dead as we had once hoped.

For those who haven’t expanded beyond the Mothership, there’s a whole storyline out in the broader universe involving an entity called The Civil Republic Military (or CRM). The CRM is the organization that absconded with both Rick Grimes and Jadis in a helicopter in season 9 of TWD. In The World Beyond, Jadis joined the CRM as a military leader. The CRM has also made a couple of appearances on Fear the Walking Dead (a CRM soldier had a fling with a Fear character played by Maggie Grace, and the two ran off together).

The goal of the CRM is basically to wipe out all of the other major colonies in the United States and devote all their resources to a single community, which will cure the zombie virus (through human experimentation) and repopulate the country. In The World Beyond, a group of mostly teenagers tried to stop them, and while they managed to destroy a facility and prevent the mass destruction of one major colony when the two-season series ended, the CRM was very much still kicking, with plans to regroup and conquer.

Taking on the CRM should have been where Rick Grimes and The Walking Dead finale merged, along with Michonne, who left The Walking Dead in season 10. She was last seen searching for Rick by apparently following a CRM unit, and there were rumors at the time that she would join the Rick Grimes movies.

With only eight episodes left and a storyline from Robert Kirkman’s source material that almost certainly needs eight episodes to complete, the CRM is almost certainly an afterthought now. At the very best, we might see an extended cameo from Andrew Lincoln’s Rick Grimes in the final run of episodes, and he might explain away the CRM (and Michonne’s whereabouts) with an exposition dump, but I sure as hell do not see TWD tackling a storyline that very few people paid any attention to. I think the architect of The Walking Dead universe, Scott Gimple, had big plans, but I don’t think he could pull them together. The pandemic knocked off the timing and the shrinking audience lost any and all enthusiasm for the CRM storyline, which mostly means that some of us endured two seasons of the awful The World Beyond and followed Easter Eggs on The Walking Dead for the last several seasons for naught. We wasted our time, and all we’re gonna get out of it is a predictable TWD finale and a six-episode Maggie and Negan spin-off set in New York City.

Basically, what has happened to the TWD universe is the equivalent of what might have happened if Marvel had scrapped The Avengers movie because, after the success of Iron Man and Captain America, they gave up because everyone hated Thor. And while I don’t love how he has transformed the moviegoing industry, the failures of the TWD universe and the spits and sputters of the DCEU sure do illustrate the importance of a guy like Kevin Feige.


← Nicolas Cage's Reddit 'Ask Me Anything' is a Goddamn Delight | Review: Is 'Ambulance' Good or Do We Just Miss the Bayhem? →