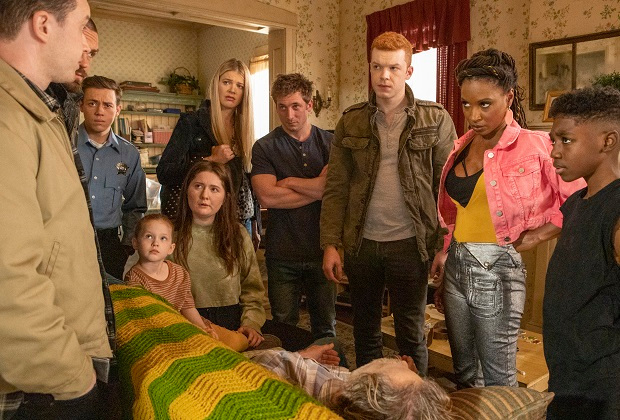 I appreciate the decision that showrunners often have to make when they end their long-running series. Should they pull out all the stops and go out with a big, dramatic send-off? Or should they end with a low-key episode more in line with previous episodes? The latter always feels like something of an anticlimactic copout in the moment, but I think in most cases, those low-key finales hold up better over time.

The series finale of Shameless, which came to an end this week after 11 seasons, delivered a remarkably unremarkable finale, save for one plot point: Frank Gallagher died. Even the circumstances surrounding Frank’s death, however, were subdued. He survived his attempted suicide by overdose last week only to succumb in the end to COVID-19. The man survived decades of drug abuse and alcoholism (and even a liver transplant and a stolen kidney), but it was COVID that eventually killed him (although, to be fair, the drugs and alcohol certainly contributed). Fittingly, Frank died alone in a hospital, with only the affectionate thoughts of his family to keep him company.

No: Emmy Rossum did not return for the finale, although previously shot footage of her from the series appeared in Frank’s affectionate family thoughts. Showrunner John Wells said that Rossum wanted to return and that he wanted her to return, but they couldn’t work out the logistics to get her from NYC to L.A. during the pandemic. That’s probably true, but you’d think she could have at least checked in on Zoom or something, or we could have gotten some footage of her continuing on with her life from NYC. Frank, in his deathbed delirium, mentions her, but no one else does, not even to let us know where she’s at or what she’s doing in the world. It’s a gaping hole in the finale.

As for the rest of the episode? It mostly hurtles toward a complete lack of resolution, which ultimately I didn’t mind. The only resolution in life is death, and it would have been dishonest to leave these characters with a happy ending. It was more of a … content one.

Liam spent much of the episode searching for Frank, to no avail. He was genuinely the only one left who gave a damn. In fact, when the rest of the Gallaghers thought that Frank had OD’d, they shrugged their shoulders and went on with the rest of their day, indifferent to whether he lived or died. Debbie continued her relationship with the reckless ex-con, who continued to do reckless, ex-con things (Debbie’s character got really shafted this season). Carl is still a meter maid, although he and his old partner (played by Josh Malina) did contemplate buying Kevin and Veronica’s bar and turning it into a cop bar. They left that unresolved, as well; Kev and Veronica still haven’t officially sold the bar, either, and the finale left open the possibility that they might not, given how little profit they’d make.

Mickey and Ian had maybe the closest thing to a resolution. They actually did leave the South Side and stay in their new West Side apartment and spent much of the episode searching for new furniture (there was also a terrific Stop the Steal rant with a furniture saleswoman). Ian talked about the possibility of having kids, although Mickey — terrified that he’d be a bad dad — was much less sure of that. The end of the episode also saw Mickey throw Ian a very sweet anniversary party at Kev and Veronica’s bar, which is where all the Gallaghers (minus Frank) congregated at the end of the episode.

Lip still hasn’t sold the Gallagher house, although he is entertaining a lowball offer of $75,000. Tami may be pregnant again, although she says that she’s willing to move back into the Gallagher home should Lip not sell. The sweetest moment in the whole episode, however, probably came when Lip asked Ian, “Should we sell?” and Ian tells Lip it’s up to him.

“Everybody’s leaving me with the decisions today,” Lips says.
“It’s cause you’re the closest thing to a dad we ever had,” Ian responds.

It’s very sweet, although it sort of minimizes Fiona’s role as the only actual parent in that household for nine seasons.

The final scene, however, was vintage Shameless, and the reason why the episode left me feeling more satisfied than not. The entire bar empties to go outside and watch and gloat as a rich guy’s $80,000 car goes up in flames while they sing Spoon’s “The Way We Get By,” and the ghost of Frank — floating above them — reads, without regret, from his suicide note, which ends appropriately with this line, “Time is precious. Don’t fucking waste it. Have a good time. I sure as hell did.”

I can’t say this enough, folx: Listen to the man’s advice. “Time is precious. Don’t fucking waste it.”

← Netflix's 'This is a Robbery' Review: A Scattershot but Intriguing Unsolved Mystery | HBO's 'Exterminate All The Brutes' Looks Head-On At History's Scars →