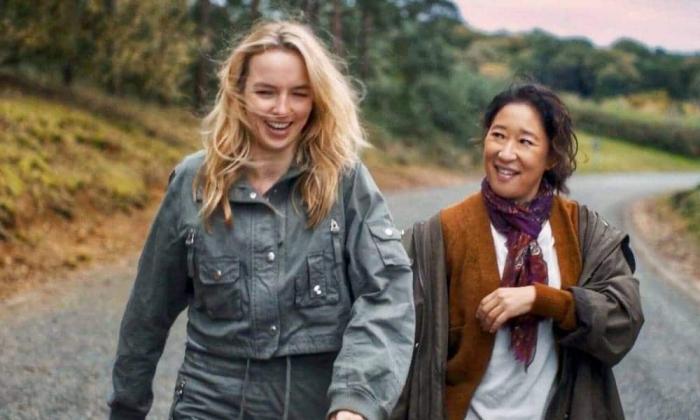 I’m assuming that the people reading this post are one of two types: Those who have seen the finale and want to have their feelings about it reinforced, and those who haven’t watched Killing Eve in a couple of seasons and just want to find out what happened. I’ll try and satisfy both.

The final season opened with Villanelle attempting to convert to Christianity because she wanted desperately to prove to herself that she possessed some humanity and also prove to Eve that she was good so that Eve would love her. Villanelle did not last long before she gave in to her urges and killed the preacher-man (who was an abusive asshole). I think the first couple of episodes existed mostly to inject the season with some Christian themes and provide a bookend for the final episode.

Most of the rest of the season, meanwhile, was about Eve and Villanelle’s separate attempts to take down The Twelve, the shadowy organization that hires all of these assassins to commit murders and invariably hires other assassins to murder the assassins they originally hired to make murder. Carolyn, meanwhile, bounces around from one loyalty to the next, less interested in allegiances and more interested in remaining in the game. Konstantin, elsewhere, trains a new assassin, Pam, on behalf of The Twelve, and develops a sweet father-daughter bond with her, not unlike his bond with Villanelle.

Much of the season centers on a lot of cat-and-mousing between Villanelle, Eve, and Hélène, a high-ranking member of The Twelve. There’s some hate kissing involved. Eve tries to learn from Hélène where the other members of The Twelve are so that she can kill them. Eve trolls Hélène by taking her kid; and Hélène trolls Eve by hiring an assassin named Gunn to shoot an arrow through Villanelle’s back. Eve nurses Villanelle back to health, and Villanelle kills Hélène. Eve takes Hélène’s phone, which provides her with the intel she needs to track down The Twelve. Eve and Villanelle don’t spend that much time together this season until the final episode.

Konstantin successfully mentors Pam, but then Hélène and The Twelve order Pam to kill Konstantin. Pam does so (with a pizza cutter), but she’s very sad about it. Before he dies, Konstantin tells Pam 1) that she didn’t have to kill him because Hélène was dead, but also 2) he’s very proud of her anyway, and 3) to tell Carolyn that he’s always loved her (even though it was Konstantin who almost certainly had Carolyn’s son, Kenny, killed). Villanelle, meanwhile, tracks down Gunn on a private island, but instead of killing her, Villanelle has sex with Gunn. Their bliss, however, is broken when Villanelle reveals that she has to leave to go kill The Twelve, which is a major bummer to Gunn because The Twelve allows her to maintain her reclusive lifestyle. As Gunn is chasing Villanelle down to kill her, Eve shows up on the island to fetch Villanelle because she knows where The Twelve will be, and she realizes that she and Villanelle should remove them together.

That brings us to the final episode, which begins with Villanelle watching Gunn try to kill Eve before Eve gets the upper hand and gouges Gunn’s eyes out. Eve and Villanelle escape the island. Most of the rest of the episode is a road-trip rom-com as Eve and Villanelle make their way ultimately to a ferry boat, where a wedding is going to be held. It’s also where The Twelve will all be meeting. Along the way, Eve and Villanelle profess their affection for one another, steal an RV from another couple, pee in the woods together (shorthand for “We adore each other!”), and have sex (off-screen. Sorry.)

im sorry BUT THIS IS THE CUTEST THING EVER #killingeve pic.twitter.com/aCM9wNc1pr

Pam, meanwhile, finds Carolyn and tells her about Konstantin. Carolyn seems bummed, offers Pam some advice about not letting her emotions get in the way of the job, and the two swim out on the lake in a way that’s meant to suggest a baptism (bringing that Christian theme back into play). Before Eve and Villanelle board the wedding ferry, they encounter Carolyn and Pam in a pub one last time. Villanelle and Carolyn pal around like old friends; Eve and Carolyn bicker like old friends, and Pam tells Villanelle that Konstantin is dead. Villanelle seems bummed about that, too.

Carolyn, who knows that Eve and Villanelle are going to try and kill The Twelve, tells Eve that she’s going to let them, not that she has much say in the matter. She also tries to hire Pam for a job, but Pam — seeing how wishy-washy Carolyn’s allegiances are — declines the offer. She may have killed Konstantin, but she misses his loyalty. She walks off into the sunset.

There’s little sense of urgency in the episode. They don’t board the ferry to kill The Twelve until there are only six minutes left of the entire series because most of the episode is devoted to Eve and Villanelle playing grab-ass and throwing snack foods into each other’s mouth in an RV. On the ferry, Eve pretends to be the wedding officiant, and she gives a sweet speech about love and relationships that’s mostly about how she feels about Villanelle. Villanelle watches her deliver the speech, smiles, and then goes into a backroom and single-handledly kills the faceless members of The Twelve in slo-mo.

When Villanelle returns from the backroom, Eve is dancing with the wedding attendees. Villanelle runs outside, and Eve follows her. Villanelle tells Eve that it’s been taken care of, and Eve says, “We did it!” and Villanelle says, “Well, mostly I did,” and then they laugh and have a moment. Villanelle is then shot in the back. She tells Eve to jump, and the two jump off the ship, but Villanelle continues to get shot through the water. They’re underwater (baptism!), Villanelle dies, and floats away, bathed in light in an angelic fashion. Eve surfaces anguished, and then we find out that it was Carolyn who ordered the hit on Villanelle.
The end.
So, what did we think? I thought it was fine. Villanelle illustrated her humanity and Eve took her back, so Villanelle accomplished what she set out to do in the opening episode. But then she died, which was probably for the best. Notwithstanding her love for Eve, Villanelle was mostly a sociopath, and there was never going to be a happily ever after for these two. There’s too much history of death. Villanelle killed Eve’s husband! Villanelle stabbed Eve and left her for dead! They could put that history aside for a day or two so they could act on their long-held feelings for one another, but that history would eventually catch up to them. Villanelle dying makes the most sense, although, I would have also accepted Eve dying along with her if only because this ending leaves one very frustrating loose end: Will Eve get revenge upon Carolyn for having Villanelle killed (maybe that will be addressed in the Carolyn spin-off).

Otherwise, the finale captured the meandering, aimless gist of the last three seasons. It was a perfect one-season series. The last three seasons were mostly unsuccessful attempts to recapture that opening season magic. We only saw flickers of it here and there, and in the finale, it flickered ever-so-briefly again before checking off the final boxes: Doing away with The Twelve; killing Villanelle; and revealing Carolyn to be the same shifty spy she’s always been.

she tried so hard to get back to eve 😩…i'll never ever forgive them for this and those extra k!ll shots that followed were extremely cruel and unnecessary 😭💔 #killingeve pic.twitter.com/BhBI55eLwB

They had no reason to kill off Villanelle. There is no special meaning to her death. It doesn’t even fit in with the scorpion and the frog or the cupid/psyche “foreshadowing”. It’s just straight up bad writing. #KillingEve pic.twitter.com/i0KIqKJjmW

I miss you Phoebe, look what they’ve done to your masterpiece #killingeve pic.twitter.com/wZ7Y9hwI3F

Thank you Sandra Oh and Jodie Comer for bring this incredible women to life, and thank you for the spectacular chemistry on screen. It’s hard to accept that a show like #KillingEve ends like it ended..

I did not fucking survive a pandemic for a shitty ending.#KillingEve pic.twitter.com/uUWmhkrYmm

what about the fucking plot of the twelve it doesn’t make any sense WHERES THE EXPLANATION I CANT BELIEVE I WATCH THIS SHOW FOR 4 YEARS AND THIS IS WHAT WE GET WHAT THE ACTUAL FUCK #KillingEve pic.twitter.com/HyxjPHNzme

Knowing what Carolyn has done, these scenes make me so disgusted by her and they reveal what an actual bitch she is. Selfish, cruel, using people for her benefit. In the end, Villanelle has so much more humanity than Carolyn does. #killingeve pic.twitter.com/BwL9gefjlQ