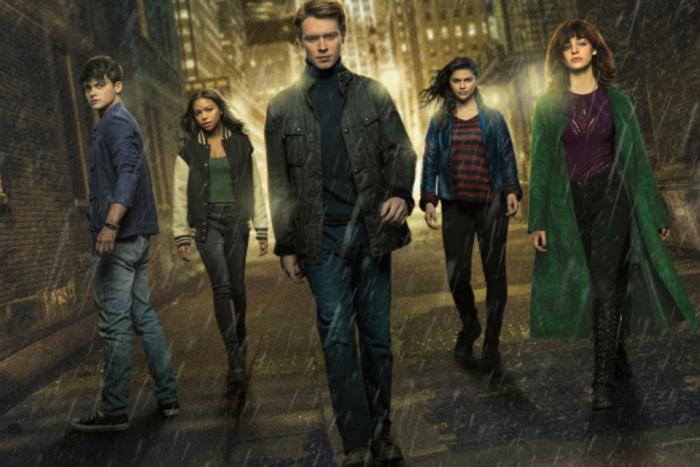 'Gotham Knights' Trailer: Thank You CW For Continuing to CW It Up

It’s been a while since I posted on the site, and honestly, it’s because I have been having a hard time as of late. I mean, besides all of *waves hands at everything*. The situation at my day job has been bonkers, people I care about are going through things and I can’t help, and even one of the few pieces of escapist entertainment I was most looking forward to is now letting me down, thanks to the manga publisher’s anti-union actions and Netflix… well, being Netflix.

Needless to say, I have been really feeling down. Until I saw the trailer for Gotham Knights due for The CW in 2023. As the minutes ticked by, my grin got bigger and bigger. A warmth flooded my chest. The cobwebs began to clear. I could see color again!

Based on characters created for DC by Bob Kane with Bill Finger. In the aftermath of Bruce Wayne’s murder, his rebellious adopted son forges an unlikely alliance with the children of Batman’s enemies when they are all framed for killing the Caped Crusader.

See what I mean? Because if I can’t enjoy anything, I will for damn sure enjoy roasting something.

I’m going to be honest with you all: I am less of a BatMAN fan than I am a Bat-FAMILY fan. While I do have my favorites, I have at one point or another enjoyed the antics and travails of the Gotham crew. Even when some of those faves got shafted in my honest opinion (pour one out for David Zavimbe), I always came back to see Bruce be a capital-D Dad and enjoy all the conflicting personalities trying to live up to his example.

Stories about Batman being alone and sad/angry are a dime a dozen; it’s been the default model for the live-action films except for the 1966 film and the Schumacher films (Batman & Robin still has one of the best summations of Batman’s ethos, and one of the most interesting villain pairings… on paper if not totally in execution, and you can quote me on that). The only times they seemed comfortable using those characters were when they could be as divorced from their Bat personas as possible (“Robin” in the Nolan films, “Cassandra Cain” in Birds of Prey). Television has managed slightly better, but even those shows that did acknowledge the existence of A Robin or A Batgirl, let alone any other peripheral characters (Titans, Batwoman, etc.) still seem reluctant for them to actually interact with Batman on a regular basis, with the animated fare like the DCAU, Young Justice, and even The Lego Batman Movie doing the best in that regard. So it’s often a relief to me when someone manages to actually get that the Bat-Family is an important part of Batman’s appeal, and you leave so many good stories on the table when you try not to include them.

To make a long story short (too late!), my love for the Bat-Family in all its incarnations runs deep. So now, you all should have a good idea of where I am coming from when I ask:

So let me make sure we all understand. They have a show clearly trying to take advantage of the Batman name and iconography, but not include Batman himself. They are willing to pull from all corners of the franchise, including:

And yet, instead of using any of the four canonical sons of Batman, they created this new character and named him TURNER HAYES (Star Oscar Morgan). He even has the same “adopted after the death of his biological parents” backstory as 3/4ths of them, only with the suspension-of-disbelief wrecking idea that HE DIDN’T KNOW BRUCE WAS BATMAN UNTIL NOW?!?!?!?!!!!

And THEN, it has the same name as the upcoming video game followup to the iconic Batman:Arkham series featuring Nightwing, Red Hood, (Red) Robin, and Batgirl, in a storyline based on Court Of Owls where they are also investigating the murder of Batman!

Note that so far, I’ve only brought up the premise of the show. I haven’t even touched on the actual trailer and what they are trying to sell as an actual television series people are supposed to watch in 2023. Yes, the CW has a reputation for bargain bin productions that mainly work off name recognition, whether from licensed material like DC and Archie or titles from their heyday (hello, The Winchesters). The recent decimation of their prime-time lineup, including canceling nearly all their DC Berlanti-verse superhero shows (to which Gotham Knights will NOT be connected), in order to save more money isn’t helping matters. But come ON, y’all.

Is Riverdale eating that much into the cinematography budget? The AV Club perfectly summed it up as:


a parody of CW superhero shows, with fancy teens going through teen drama alongside set and costume designs that make Titans look like it has the budget of Zack Snyder’s Justice League.

…but like, it’s even worse than that? It’s basically Disney’s Descendants, but replace Kathy Najimy with Misha Collins (as Harvey Dent? Really?) desperately struggling to not let his constant fantasies of escaping to The Boys with Jensen Ackles flicker too much in his eyes. Does he succeed? You make the call!

There is always the possibility that this could turn out okay, maybe even good? But this is not a great start.

Not for nothing, but here’s a quick reminder to check out Wayne Family Adventures on Webtoon if you haven’t yet.

Quick disclaimer: due to people being weird online about anything remotely related to fandom in general or certain fandoms in particular, it apparently must be stated that I have nothing against the actors or their casting. Hell, I would have loved if the show was about a Black Robin (in case anyone got a problem with that, just look up “Duke Thomas”) leading this team of villains’ kids to clear their names and avenge her mentor. But for some reason, The CW felt the need to temper this very cool idea by creating a white male character from whole cloth (not even going to touch how three Robins have non-WASP ethnicities in canon) to be the focal point. My problem is solely with the choices to focus on another “spoiled brat forced to grow up” storyline and the lack of funds to actually make it visually interesting (in other words, a CW show). None of that is on the actors. Anyone trying to use the network’s lack of care to excuse their own bigotry is kindly invited to take a long dive off a short pier.