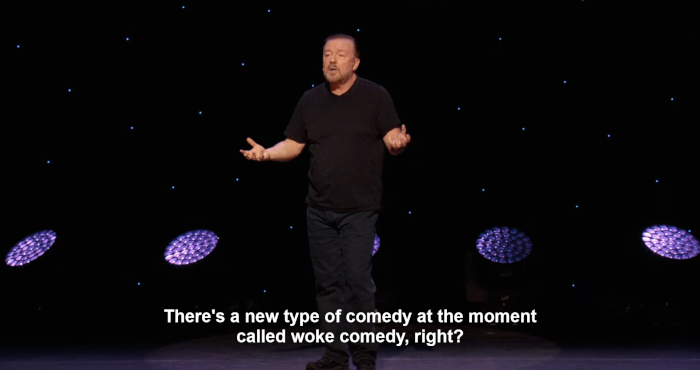 “Oh, women! Not all women, I mean the old-fashioned ones,” Ricky Gervais jokes four minutes into his new special, SuperNature. “The old-fashioned women, the ones with wombs. Those f—king dinosaurs. I love the new women. They’re great, aren’t they? The new ones we’ve been seeing lately. The ones with beards and cocks. They’re as good as gold, I love them. And now the old-fashioned ones say, ‘Oh, they want to use our toilets.’ ‘Why shouldn’t they use your toilets?’ ‘For ladies!’ ‘They are ladies — look at their pronouns! What about this person isn’t a lady?’ ‘Well, his penis.’ ‘Her penis, you fucking bigot!’ ‘What if he rapes me?’ ‘What if she rapes you, you fucking TERF whore?’”

Oh, comics! Not all comics, I mean the old-fashioned ones. The old-fashioned comics, the ones with nut sacks swinging at knee height and a sense of humor that went out with the minstrel show. Those f—king dinosaurs. I love the new comics. They’re great, aren’t they? The new ones whose acts don’t rely on cutting down groups of people. The ones whose masculinity isn’t wrapped up in shouting “LOOK HOW NOT GAY I AM!” every 5 minutes like a closeted Republican tapping his foot in a bathroom stall. They’re good as gold, I love them. And now the old-fashioned ones say “They’re canceling us!”

“There isn’t a single comedian alive who’s been canceled and had it affect their career, except maybe some of the rapey ones and even most of them made comebacks. Why shouldn’t they cancel you?”

“It’s free speech!”
“They’re using free speech. You are too. What about this is unclear?”
“Well their criticism…”
“What about their criticism?”
“What if they attack us?”
“What if they do, you milquetoast dweeb? So far Chris Rock got slapped for a lazy joke about a celebrity’s wife and Dave Chappelle got jumped by a homeless man upset by a joke about child abuse. No one is attacking you.”

But if you’re the type of person who revels in being “edgy” in the same way that worked 10, 20, 30 years ago, you don’t get to complain that not everyone still finds you funny. You can predict what’ll be offensive in the future if you use your brain for a second. The dominant mob is the same one that’s been in charge for the last few centuries. Like the worst thing you can say today to comics — the thing that will get you subjected to Twitter death threats from Joe Rogan and Dave Chappelle or Ricky Gervais fans — is “maybe punch upwards for a change,” right? Everyone saw that coming. You’ll find ten-year-old tweets from Roseanne, Louis CK, and oh hey Ricky Gervais saying, “People disagreeing with me violates my free speech!” Do you know why? Because they’ve been riding on their own coattails for years.

These comics are virtue signaling. They’re trying to bring people down to raise up their own status and they say “No, we’re protecting free speech.” They’re saying anyone who doesn’t find them funny is attacking free speech, which is so patronizing. I get what it’s like to be found offensive. I’m an obnoxious loudmouth who still finds the personal insult a lot of fun, so when I say things like “Why does Ricky Gervais dress like an overstuffed black pudding?” people get upset.

Comics complain that people critique their acts, even people they have no contact with. Michael Che found his way into our comment section to do so. Ricky Gervais searches his own name on Twitter so he can try to get his critics fired even though it doesn’t affect him.

One time Ricky Gervais searched his name on twitter, saw that I said he wasn’t funny, then tried to get me fired by tagging my boss in a tweet about it. Anyway he’s 100 percent reading everything you’re saying

Again, every comic’s got the right to be offended and complain — it’s how most make their living — but they have to know they’re not the only ones who get to say what they want. We know comics are trying to make a certain segment of the audience laugh. We’re not trying to shut you down. That’s not our goal. We’re trying to make you think about why you’re joking about this group or that group. We want you to make a living, we want you to be successful. Because comedy that doesn’t change stagnates. Most of it stops being funny because it’s of the moment. It’s why 99% of the people reading this piece can’t name three comedians active in America 100 years ago. Chasing relevancy using old material rarely works, and when you’re doing it by picking on a minority, it only works with a particular audience. If that’s who you want thinking you’re still cool, that’s your business.

Here’s the deal: If I said something so outrageous here today, if you are so hurt that I would point out the obvious hypocrisy of the Canceled Comic Movement, don’t make a scene in the comments where you’ll probably just get banned anyway. Go to Twitter. There’s a box you can fill out with all your outrage and get your buddies to retweet it. Then what I do is visit Twitter and search my own name for those tweets, and I don’t try to get you fired. I just laugh at you.

Ricky Gervais’ new standup special, SuperNature is available now on Netflix. It’s 52 minutes long and some of them are funny. For a more serious dissection of the special visit Variety.


← James Corden Delivers A Heartfelt Message To Americans After The Texas School Shooting | 'This Is Us' Delivers a Remarkable, Low-Key Series Finale →