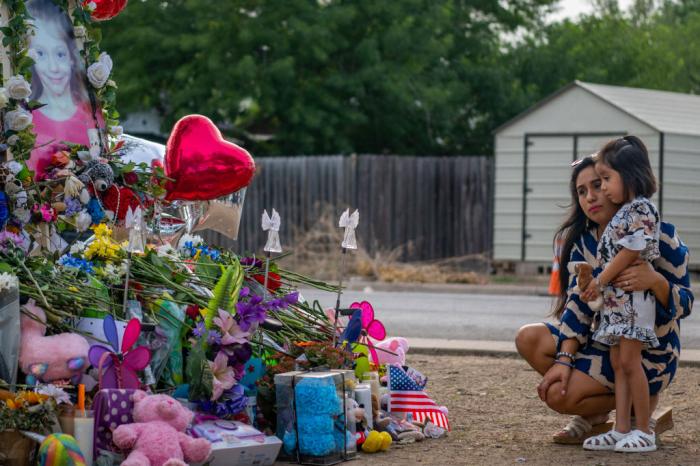 One week after the Robb Elementary School shooting in Uvalde, TX that claimed the lives of 19 children, 2 teachers, and a widowed husband, questions mount as discrepancies in law enforcement witness statements and timelines are exposed. Every initial claim from local and state officials is demonstrably false, as multiple emergency calls and video evidence reveal. A story of officer bravery and swift action quickly devolved into incompetence and cowardice as 19 officers, directed by Uvalde Consolidated Independent School District Police Chief Pete Arredondo, waited in the hall while the shooter murdered children. Children who called 911 as they awaited help that never came.

The official story shifted again Tuesday after lawyers for the teacher accused of propping a door open that allowed the shooter school access pushed back against statements by Dept. of Public Safety Director Steve McCraw. The teacher had temporarily propped the door open to retrieve classroom snacks from her car when she saw the shooter approaching — a shooter ignored by a passing school safety officer. The teacher ran back inside the school and shut the door behind her. Its lock failed to engage and the shooter followed her in. District officers followed shortly after and briefly exchanged fire that allegedly left the officers injured. They waited for backup but, once it arrived in the form of heavily armed and armored local cops and Border Patrol agents, continued to delay on orders of Chief Arredondo. During the interminable wait, agents and officers busied themselves tackling, handcuffing, and tasing desperate parents.

The state-level investigation of police actions during the shooting hit a roadblock soon after McCraw’s Friday news conference. Police from the Uvalde Police Department and the Uvalde Independent School District stopped cooperating with investigators once the outraged public heard a more accurate timeline of events. Chief Arredondo has not responded to interview requests from the Texas Rangers. He did have time, however, to be sworn into the Uvalde City Council during a secret ceremony last night, the results of a previous election held 3 weeks ago. On Monday, Uvalde Mayor Don McLaughlin claimed the ceremony was canceled because the city was focused on “our families who lost loved ones.” By 9:30 last night, however, Arredondo was sworn in without the public’s knowledge.

BREAKING: Uvalde ISD Chief Pete Arredondo was officially sworn in as a city council member today, Mayor Don McLaughlin confirms in a statement. This comes hours after DPS said he is not responding to a request for a followup interview. pic.twitter.com/yKG1ed68AE

While the town is obligated to place Arredondo on the City Council following the election despite his seeming cowardice and dereliction of duty, there’s no question that doing so in secret after publicly canceling the ceremony will meet with anger and suspicion. And rightfully so. Arredondo refuses to answer questions about his actions — and lack thereof — that led to further deaths among the teachers and students of Robb Elementary. Yet he has time to take on more political power while traumatized children and parents are still reeling from the events of last week. Every indication from local police suggests they’ve obfuscated the facts from the very beginning. According to Lt. Chris Olivarez last week, cops worried “they could have been shot,” and it kept them from breaching the classroom. Daniel Rodriguez, the chief of the Uvalde Police Department — a different group of cops than the Uvalde Independent School District — claimed his officers received gunshot wounds when they responded to the school, yet no further details have been released on their injuries. Given the truly staggering amount of bad press local PD received in the mass killing’s wake, it suggests their injuries are superficial. Were they serious, the officers would be paraded before cameras and we’d receive hourly updates on their condition. Instead, there is silence.

It’s too much to hope that the abject failure of the Uvalde ISD police department to protect the most vulnerable members of its community will result in a pushback against the constant pro-police propaganda pushed by national and local news. Despite the constant barrage of stories about the dangers of law enforcement, being a cop isn’t even in the top 20 most dangerous American professions. Given that, officers are expected to respond with competent alacrity to the times that are dangerous, that justify their exorbitant budgets and military-issue weaponry. Their response to the Robb Elementary tragedy puts the lie to that expectation.