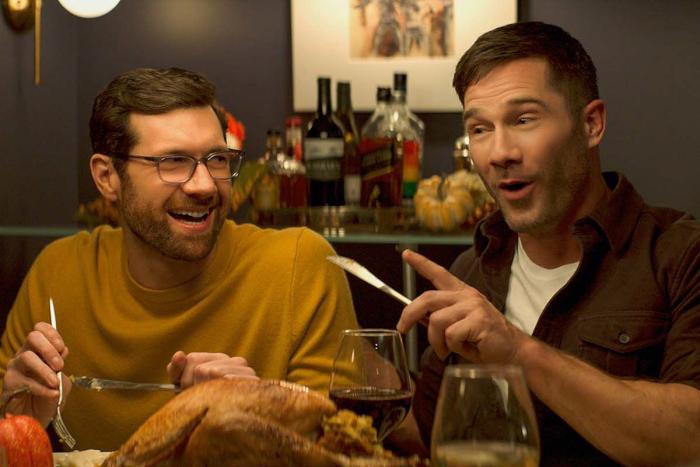 The Death of Theatrically Released Comedy: Exhibit B, 'Bros'

As we reported earlier this morning, Smile topped the box office this weekend with $22 million, while the heavily promoted Billy Eichner gay rom-com, Bros, flopped, coming in fourth with less than $5 million. Billy Eichner, who was everywhere over the last two weeks, expressed some frustration with the box-office result on Twitter this weekend: 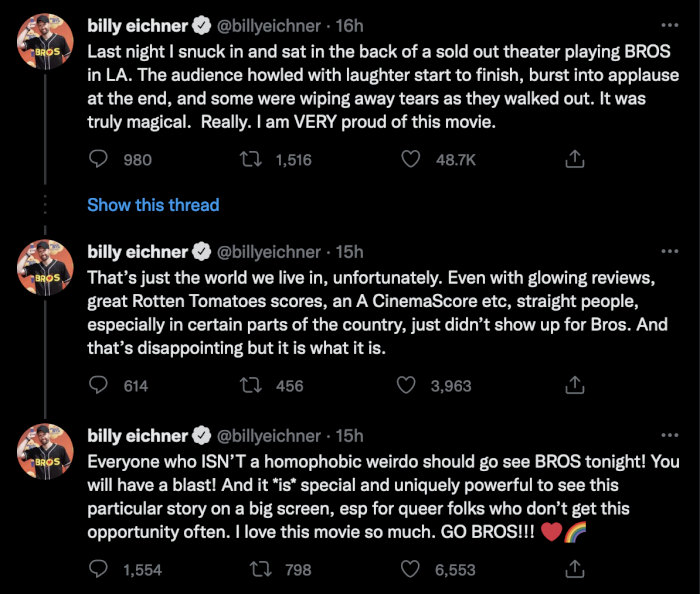 I’m sure that homophobia played some role in the dismal box-office performance, but I don’t think that’s the overriding factor, nor was Jason’s tepid review of the film. I hate to beat a dead horse here — I just wrote about this topic two weeks ago when Confess, Fletch fell through the theatrical cracks — but the biggest problem with Bros was not homophobia, nor was it the lack of star power, or bad marketing. The problem with Bros is its genre. The problem with Bros is that it didn’t have a superhero or an action set piece, a big heist, a series of gruesome deaths, or a big whodunit mystery.

Theatrical comedies are dead. Dead. Dead. Dead. Dead. They started dying in 2015-17, they fell into their death throes in 2019, and then they completely passed away during COVID. Back in 2007, in my review of Knocked Up, I wrote something along the lines of, “It’s Judd Apatow’s world, and we’re just living in it.” That was true at the time, and basically for the next decade, through Trainwreck to the stoner comedies of Seth Rogen and the comedies from the Apatow circle, from Nicholas Stoller to Paul Feig.

There was no amount of positive reviews or marketing money that was going to convince millions of people to watch a comedy in theaters in 2022. I mean, take solace in this, Billy Eichner: Judd Apatow — who produced Bros — has neither produced nor directed a successful box office comedy since … 2015’s Trainwreck. His last two, Bubble and The King of Staten Island, went straight to streaming. Nicholas Stoller — who directed Bros — hasn’t directed a hit box-office comedy since 2016’s Neighbors 2: Sorority Rising. Hell, ask yourself this: When is the last time you watched a Seth Rogen movie in the theaters? Maybe you saw Long Shot in 2019 (during the death throes of theatrical comedy), but for most of you, it was probably … Neighbors 2: Sorority Rising.

You know what gay rom-com didn’t disappoint at the box office? Fire Island, because it debuted on Hulu. That’s where all the hip new comedies are appearing in 2022, from Do Revenge to I Want You Back to Meet Cute.

The problem with Bros is that Billy Eichner (and Judd Apatow and Nicholas Stoller) thought that “being the first mainstream gay rom-com” would trump the fact that no one watches comedies in theaters anymore. The problem is not the movie — a well-reviewed original gay rom-com — it is the old-fashioned distribution method and the studio execs who let this one slip through into theaters instead of debuting it the way that God intended: On HBO Max or Hulu or Netflix. I mean, God has a great TV, so unless there are a lot of cool special effects, God wants to do all his laughing at home with a weed gummy and some Thai takeout.

Personally, I can’t wait to see Bros. When it debuts digitally. I’m gonna watch the sh*t out of it. In the meantime, Eichner can take some solace in this: Bros, with its $4.8 million opening weekend, has outperformed the entire box office run of Confess, Fletch by $4.3 million.