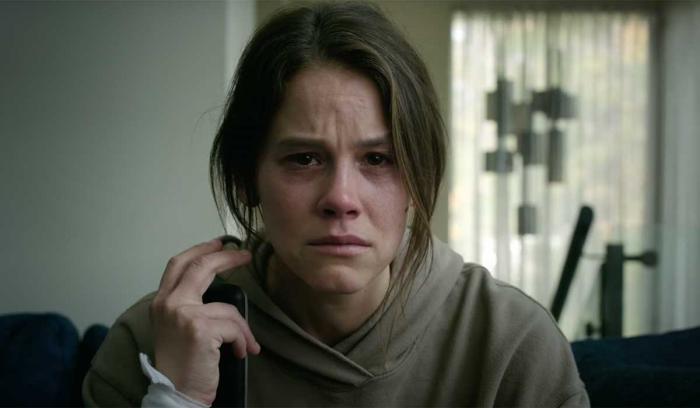 When it was announced that Sosie Bacon had joined this project, it was called Something’s Wrong with Rose. Writer and director, Parker Finn, had been asked to adapt his 2020 horror short, Laura Hasn’t Slept and this title made it feel like the next link in the chain. Of course that tracks, this being the story of an entity creating a chain of deaths. Somewhere along the line of converting this into a feature, the title, like the story, became simple. This pitch black and bleak story of immense sadness is called Smile.

Dr. Rose Cotter (Sosie Bacon, Mare of Easttown) is dedicated to her job of working with acute mentally ill patients. Her calm demeanor and desire to care propels her ability to work closely with struggling people and get them the help they need, or the best help they can get in the restrictive and faulty healthcare system.

Her world is rocked when a patient, Laura (Caitlin Stasey), comes to the hospital presenting with what appears to be paranoid delusions. Laura swears an entity is haunting her, wearing the masks of other people and smiling at her, telling her she is going to die. As Rose struggles to get through to her, Laura eventually gets up, creepily smiles then slices her own throat with a piece of a cracked vase.

Reeling from the incident, Rose soon finds herself seeing and dodging the entity that Laura described which causes her to rapidly unravel. As she tries to conquer and best the entity, the people around Rose become increasingly concerned with her wellbeing and her mental state, failing in their attempts to get through to her, struggling to find the right way to approach her. Rose frustratingly manages the people around her refusing to believe what she is experiencing and sets off trying to tackle this entity on her own. She sets off on a journey that takes her back through her traumatic experiences, forcing her to face how they shaped her life.

Yes, it’s how it sounds. Smile is yet another horror story about trauma and grief. It follows the same path forged by this subgenre but in high quality ways without necessarily screaming “elevated.” This story does for mental illness what It Follows did for STIs, leaning on predecessors like Ringu for entity inspiration. Rose is trying to outrun a chain event whereby witnesses to suicides become the next in line to die that way. Smile taps into the overwhelming fear that our own trauma reactions can be completely outside of our control.

The overwhelming fear comes in many forms here. I’m enamored with the mishmash of scare types and cinematography. Smile plays with jump scares, slasher tropes, and supernatural horror to create an interesting and horrifying collection of images. There’s a shot of a diner that makes it feel like you’re suddenly watching a different movie, and it’s an interesting flex in the middle of a relentless series of scares. Loud ringing phones, security systems, and open doors are reminiscent of Wes Craven thrills, and fake out scares feel like those from Mike Flanagan (specifically in Oculus) or from Keith Thomas (if the phone from The Vigil scared you, you get it). Smile runs at an incredibly high speed, ripping from a cold open into an immediate cavalcade of scares. It spends just minutes setting the stage before thrusting Rose into a rapid-fire beat down that never lets the audience take a breath. I found myself sounding like I’d returned from a jog after quietly riding the theater escalator out.

Finn ported over Stasey, who acted in the short, to play Laura in this adaptation. Stasey is so strong in her portrayal of the frantic and grinning Laura and her opening moment sets the tone for everyone else. The aforementioned gorgeous shots and performances are what raise this story up. Bacon embodies various changes in Rose’s deterioration in ways that keep you on the ride with her, while still understanding how external observers would see her. Kyle Gallner, as Rose’s ex and investigating officer, gets to do some comforting work here as the safe-space-clean-cut-crewneck guy, which is a nice role to see the horror regular slotted into.

Everyone’s mileage will vary with respect to the consumption of the movie’s blatant themes. Inherited trauma and reactions to trauma have been tackled by horror films aplenty, but this story not only calls the entity what it is (specifically addressing that it feeds on trauma), it intentionally steps further into the bleak possible ending to stories of mental illness, dying by suicide. The story shows how trauma and mental illness can spread in ways not unlike a virus. In doing so, it indicts not just the healthcare system but mental illness stigma and how it can be fatal.

Here’s your spoiler warning, hear it loud and clear and proceed with caution.

The finale of Smile was the piece that I took home with me, undecided about where I’d land. In the end of the story, Rose chooses to cut the entity off by isolating herself in her childhood home where she witnessed her mother die by suicide, the trauma that shaped her life. She goes there to deny the entity the ability to spread further and finds herself metaphorically facing her demons to resolve her trauma and find closure.

In the theater, I silently plead to no one, “please don’t let it end the way I think it will end.” While there’s the hope that Rose will get closure and break the entity’s chain, instead, Joel (Gallner) arrives to attempt to rescue her, and he witnesses a smiling Rose set herself ablaze. It’s completely gutting and bleak to see that suicide was the only answer for Rose and that getting closure from her trauma didn’t save her. But (aside from the fact that this ending makes for a better horror movie moment), Rose’s finale isn’t as hopeless as it initially feels.

Smile shows Rose, the therapist, surrounded by family, doctors, and what looks like support. But the film is never not an indictment of the fatal outcome of mental illness stigma. Rose’s partner runs at the first sign of trouble, rubbing it in her face that he has looked up inherited mental illness. Her sister quickly cuts her off, the same way she cut off their mother. Her own therapist is dismissive of her, and she is constantly met with authority figures using words like “nut jobs” and “head cases.” By ending the story this way, Smile isn’t necessarily positing that there’s only one way out of these scenarios but is further indicting the healthcare system and mental health stigma such that even a therapist with access to available support is up against difficult odds. That said, it wouldn’t be completely off base to be perturbed by the hopeless ending, and it’s more proof that certain horror can affect all audiences differently, the most difficult subject matter being upsetting for some and cathartic for others.

Smile is not for the faint of heart and is not likely to be the comfy cozy October rainy day watch. This ruthless horror story is grim indictment of mental health stigmas wrapped in a terrifying batch of scares. Though it comfortably walks a beaten path, those with the appetite and stomach for more will get a brutal and unrelenting scare.