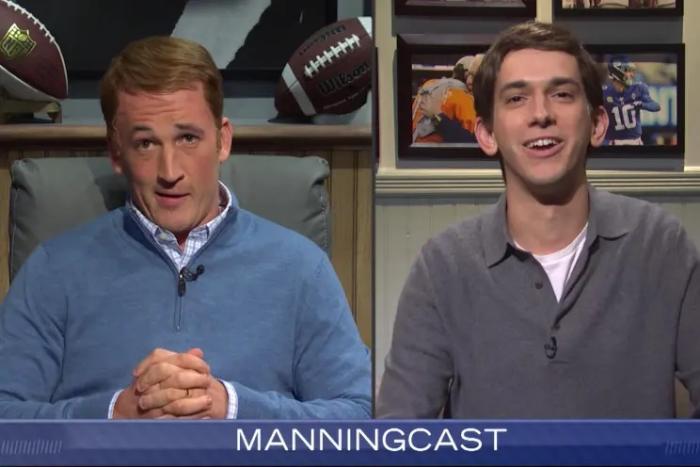 Cold Open — OK, maybe this is why I like Miles Teller in spite of everything else about him: He has an uncanny resemblance to Peyton Manning, who is my all-time favorite NFL player (in spite of everything else). And John Milhiser is a good Eli. They’re doing a Manningast on the first Cold Open of the season, and it’s hysterical. Jon Hamm joins Peyton and Eli in the booth to talk about what a catastrophe the Cold Open is. “They haven’t even used Kenan yet!” Great opening to the season. Meta-excellent! Too bad the Manningcast wasn’t around for the rest of the show. Mat hates Peyton, so this is the Mat skit of the week! Welcome back! (Score: 9 out of 10)

Miles Teller — Did you know that Miles Teller also looks like Rachel Maddow? It’s true. A few Top Gun jokes, a little self-deprecation, and a home movie of Miles playing Cheri Oteri in a homemade SNL skit. Pretty good stuff. (Score: 6 out of 10)

Send Something Normal — Four male contestants who will win $100 million if they send a woman a normal DM. First contestant: Adam Levine. Oof. And then Armie Hammer. Neil DeGrasse Tyson and then Bowen Yang, playing himself, the returning champion on the count of “being gay.” Armie Hammer: “I want to break open your bones and suck out your marrow.” A solid skit that doesn’t overstay its welcome. (Score: 6 out of 10)

BeReal App — A new social media network where you’re required to post a photo of yourself being real at a certain time each day … it’s set during bank heist. It’s OK. I like the idea of the app more than I like the skit. (Watch Here) (Score: 5 out of 10)

Charmin Bears — Welp. The show started out well. Here’s where it starts to go downhill. Toby, a Charmin toilet paper bear, gets into a fight with his Charmin bear parents, because he doesn’t want to go to toilet paper college. Toby doesn’t want to be a Charmin bear. He wants to … dance. I think it’s supposed to be a Billy Elliot kind of thing, but uh, it’s not good. (Watch here) (Score: 2 out of 10)

Dude Bros — A couple of douchebros trying to pick up women turn out to be very, very bad at it. Like, really bad. It’s, uh, OK. It had potential, but way overstayed its welcome by about 4 minutes. It’s a 5 minute skit. (Watch Here) (Score: 4 out of 10)

AMC Nicole Kidman Promo — Those of you who go to AMC theaters and see the Nicole Kidman promo … this is Chloe Fineman doing a parody of it. It’s great, mostly because of Kenan. (Score: 6.5 out of 10)

Weekend Update — Kicking off the season with a bad Britney Griner joke. Ooof. The political jokes are … tepid. Herschel Walker and Mitch McConnell discuss Herschel’s electability. It works because Kenan plays Herschel. Michael Longfellow comments on the backlash Sidney Sweeney got for having MAGA Parents. I think I’m going to like Longfellow. Bowen Yang plays a Spotted Lantern Fly, which is intentionally obnoxious, but obnoxious all the same (watch here). (Score: 6 out of 10)

McDonald’s — The old Mcdonald’s gang (Ronald, the Hamburgler, Mayor McCheese, etc.) get back together, but Grimace lost 300 pounds and got jacked by … not eating McDonalds for every meal. Now Grimace is a bisexual douchebag. It’s bad. (Watch Here) (Score: 2 out of 10)