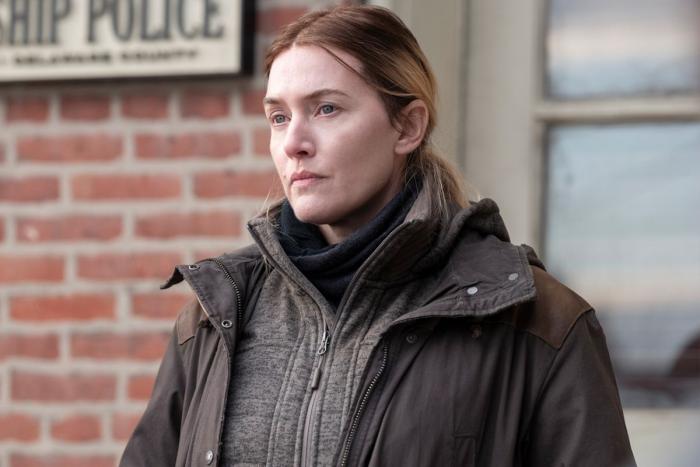 Mare of Easttown feels like one of those bleak, prestige British murder shows that’s been transplanted to small-town America. It’s like Netflix’s Collateral, only instead of Carey Mulligan and London, Mare of Easttown stars a decidedly unglamorous Kate Winslet and is set in sh*t-poor Pennsylvania, where you can almost smell the woodsmoke, dead leaves, and grief.

Winslet plays Mare (short for Marianne) Sheehan, the detective of the town, who everyone seems to know because she made the winning shot in a big high-school basketball game 25 years ago, a shot that seems to define not only the town but Mare herself, who may have peaked before graduation. We don’t know the exact details of her last 25 years, but it clearly includes family tragedy (her drug-addicted son’s suicide, as well as her detective father’s death in the line of duty); a divorce (her husband has moved on but still lives next door); and a lot of alcohol to hide the pain. Also, to help lubricate a tryst with a newcomer, Richard Ryan (Guy Pierce), a former novelist turned struggling creative writing professor at a small nearby college.

Mare, it is clear by the lines in her face, is a character saddled with trauma who has little patience for even small-town niceties, not that there are many niceties in Mare of Easttown, a limited series that throws in cancer, murder, and drug addiction to make damn sure you know you’re watching a gloomy, Emmy-gunning limited series. There’s also a missing girl case that’s been hanging over Mare’s head for over a year, and the girl’s mother — a former teammate of Mare’s — won’t get off her case about it.

On top of everything else, the opening episode ends with the murder of Erin McMenamin (Cailee Spaeny), a young single mother beaten up and chased away from a party by the jealous girlfriend of her baby’s father. Erin is desperate to raise $1800 to pay for her child’s ear surgery, but her ex insists she arrange it through the courts, while her own (clearly abusive) father resents having to continue to play a role in her life.

Erin is found the morning after the party in a creek bed with a fatal head injury, leaving viewers to wonder if her murder is connected to the missing girl from the year before. We’ll apparently get to know Erin more in flashbacks (she’s not just a dead girl plot device), which I am sure will offer clues to the identity of her murderer. Detective Colin Zabel, an outsider played by Evan Peters, will also arrive in episode two to offer Mare assistance in the two cases, as well as some big-city attitude, I’m sure.

It’s grief porn, no doubt, but it’s also very well done. Winslet’s character weirdly reminds me of Ben Affleck’s in his addiction-and-basketball drama No Way Back (the last movie I saw in theaters), which makes sense considering both come from the same writer, Brad Ingelsby, who also wrote the similarly bleak Out of Furnace. Craig Zobel (The Leftovers, The Hunt) directs all seven episodes, which are clearly designed to make us feel better about our own lives. It works. Sometimes, there’s a strange comfort in the misery of fictional characters, whose messy lives spill out into dreary forests and dark, sticky bars, which look like they smell like 20-year-old cigarette smoke residue. It’s the perfect show for anyone who loved to bathe in the unsparing pain of shows like Broadchurch and Sharp Objects, and it will no doubt be equally awarded during this year’s Emmy telecast.