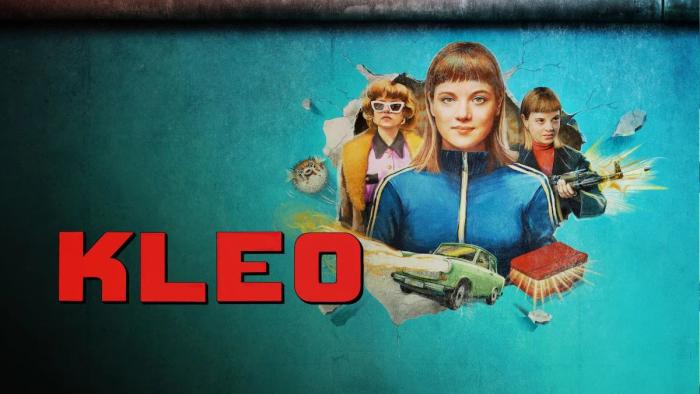 There are two ways in which your grasp on cultural references can prevent you from being fair in reviewing something narrative: When you don’t have a deep knowledge of the foreign culture being depicted or when you’re deeply enmeshed into a culture being depicted by a foreigner … and yet the foreigner is actually doing a decent job, they’re just missing a lot of details. Both apply to me in regards Netflix’s German-language series Kleo.

Structurally, this is the definition of what you might call a Classicist Spy-Thriller. Kleo Straub (Jella Haase) is a top agent at black-ops division of the Stasi, the intelligence apparatus of the German Democratic Republic, also enjoying a privileged position as the granddaughter of a Stasi commander. For an agency that openly kept tabs on every single one of its citizens and made the KGB look like apprentices, their black-ops were basically offing people left and right of the Iron Curtain and the Berlin Wall.

The story kicks off in 1987, after Kleo conducts a successful hit on a supposed American asset in West Berlin. However, this being East Germany, she is soon arrested on trumped-up charges of treason, denounced by her grandpa, and thrown in jail for the remaining years of the Democratic Republic of Germany. Over the course of her stint, she is brutally assaulted and loses the baby she conceived with her lover and agency handler. She is released shortly after the fall of the Wall and sets off on a course of vengeance against every single person in East German intelligence that framed her. Chasing her trail is Sven (Dimitrij Schaad), a hapless West German detective who was a witness to her last hit, and ever since has developed an obsession with her. Over the course of her rampage, Kleo discovers that it all harkens back to a mysterious briefcase she retrieved in that fateful last operation. A briefcase that might have compromising information for all parties involved in the Cold War, even though the Cold War was winding down everywhere.

The parallels to Killing Eve are inevitable (and the comparison is mentioned in every other review you can find via Google); it’s not unwarranted. They share the darkly comedic tone, the stylized violence, the subtly deranged but magnetic performance of its lead, the broader conspiracy in which the main characters are but pawns, the obsessive (and married) foil that is thirsty for the villain, the female assassin that has been brainwashed and manipulated by the parental figures in her life, the colorful cinematography and European travelogue. Plus, several zany side characters who don’t have much impact on the plot, but are there to provide color. This is the case of Thilo, (Julius Feldmeier), a party boy from West Berlin who took over Kleo’s apartment while she was in prison, and with whom she strikes a sincere friendship.

But perhaps this is where the limitations of our cultural background prevent us from noticing what makes Kleo more than just a copycat. The style is awash on Ostalgia and East German culture, in things like its LOMO-inspired saturated palette, the deadpan humor with which it tackles the cruelties and brutality of the system, an abundance of Trabants, and the relative earnestness of the characters when it comes to their inner life. They are all broken, but not because they operate within the confines of cynicism and neoliberalism, like those from Killing Eve, but because they are actually seeing their convictions falling apart in real time.

Kleo is at its best when we actually get to explore how Kleo (the character) balances the fact that she is still a believer in the ideals of East Germany while killing a good number of the highest-ranking officials of the regime for turning her into a patsy. Jella Haase delivers subtleties in her manic countenance where we can tell that, unlike Villanelle, she is a person with feelings and a code. But just like its lead is forced to find her own footing in a new world, while she checks off people from her hit list, Kleo (the series) has an identity problem, as it relies heavily on many of the tropes and twists we have seen in countless spy-thrillers before. Said tropes don’t come across as heartfelt tributes to the genre, but more as the showrunners going over the classic beats. This is disappointing because the tropes we associate with the “wronged spy on a revenge course” format originate from the Western side of the curtain, the Jason Bournes or Mitch Learys, who were betrayed by a wholly different structure and ideology than those on the Eastern side. The story shouldn’t ultimately devolve into a standard McGuffin chase. When it treads those tropes, Kleo ends up coming across as a Killing Eve in athleisure and without the fun queer dynamics. That is something that cannot be explained by me not knowing the subtleties of East German culture, which leads me to the second part of the first paragraph.

Kleo’s chase leads her to Chile, and this is where real-life facts come into play. Erich Honecker, the GDR’s last head of state, fled to Chile, along with his family, right as the German Reunification started. Because if one thing is true, it is that Chile will provide shelter to German human rights abusers regardless of their political ideology (they had many connections from Chileans that were asyled in the GDR during the dictatorship). The scenes set in Chile were clearly not filmed here, as it can be noticed by the accent of the local character and that the Santiago they used is clearly more tropical, but they did put an effort into replicating the aesthetic of Chile in the early 90s. More importantly, the soundtrack uses New Chilean Folk standards in four key needle drops in ways that are clever and meaningful. However, I still think the series felt trapped in exoticization tropes in its Chilean setting, in particular, a left-wing idealization that overplays the aesthetics of tragic heroism many Germans have of our own history. Instead, it could’ve served as a way to explore the connections between two failed Socialist projects: One that was democratic and killed by capitalist forces, the other authoritarian and brought down by its own demons.

There will be a second season, let’s hope they use it to bring more to the characters, especially its lead.