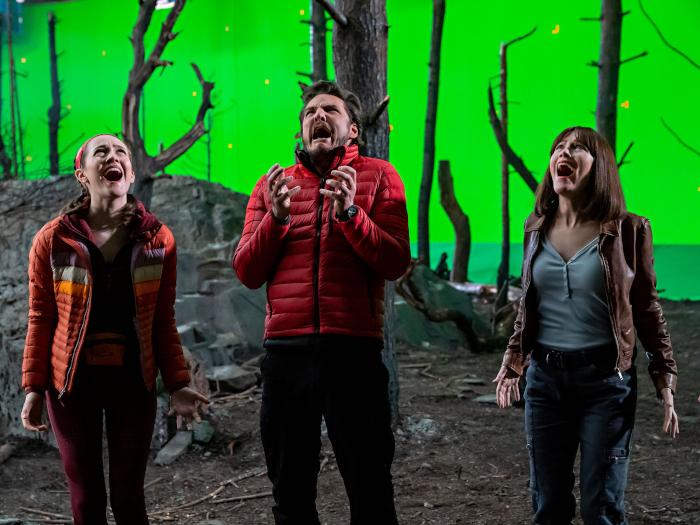 Netflix’s 'The Bubble' Asks, 'What if that ‘Imagine’ Video Was a Two-Hour Movie?'

Over the last couple of years, filmmakers and studios have been trying to respond to the challenges presented to the industry by the pandemic. Whether that’s streaming platforms like Disney+ serving as the debut for films that would normally appear in theatres or Sam Levinson making something like Malcolm and Marie. Now, seemingly at the exact moment that our concerns — rightly or wrongly — move beyond the pandemic, Netflix has released The Bubble, a Judd Apatow comedy about a group of actors trying to finish an action film while working through COVID restrictions, personal problems, and the fact that the movie they’re all starring in is terrible. Unfortunately, this last sentence applies to both the in-universe Cliff Beasts 6 Battle For Everest: Memories of a Requiem, and The Bubble itself.

From its opening moments, it’s clear what The Bubble wants to position itself as: some kind of comic commentary on the state of Hollywood; more specifically, on the ubiquity of the blockbuster-industrial-complex. The opening titles describe Cliff Beasts as the “27th biggest action franchise,” one that’s about to go into its sixth iteration (with a seventh on the horizon by the end of The Bubble). The production of Cliff Beasts — putting the ways in which it tries to respond to COVID to one side — is in theory full of the potential for comedy: the way it cuts between “action” and the spectacle of a group of actors running on the spot, surrounded by green screen, something that gets taken to even more ridiculous extremes after Leslie Mann’s Lauren Van Chance has to bail on production because her fingers get shot off when she tries to escape production on the movie (really). It’s the strained relationship that The Bubble — essentially a film about COVID — has with COVID that makes the whole thing feel strange, a failure of both timing and execution. There’s clearly space for something to put the blockbuster machine in its sights, and there are moments where The Bubble tries to say something about it; the problem is that it never knows quite what it wants to say, whether it wants to satirize these actors or take their problems seriously.

Throughout The Bubble, it draws lines between the haves and have-nots when it comes to dealing with the pandemic. When Kate McKinnon’s producer Paula says that the “pandemic has been hard on all of us,” she’s at a ski resort because its “the only country that’s open,” something that seems designed to create some kind of sympathy for the difficult lot of the actors, stuck in a hotel, making a terrible movie. Whether or not characters make contact with each other physically or not becomes a source of comedy, although it mostly feels like an unnecessary slapstick echo of the “WE HAVE A 2319” joke from Monster’s Inc. The gulf between Paula and the cast of Cliff Beasts isn’t as pronounced as the gulf between the cast of Cliff Beasts and the staff of the hotel where they’re quarantining/filming, and of course, one of the final punchlines reveals that the actors didn’t even tip the staff.

The Bubble seems almost too afraid to lean into mocking the entitlement of these actors — there are moments of it, always from hotel staff and low-paid crew members, as if it feels the precarious nature of the industry itself on its own shoulders, unsure how to feel about its own characters or the current cinematic landscape. It means that no matter what kind of comedy The Bubble is aiming for — something that’s very much still an open question — it’ll end up missing the mark. Its desperate desire to earnestly feel bad for these actors while also constantly acknowledging how easy it was — and is — for the wealthy to ignore the real-world consequences of the pandemic means that the strained, uncertain earnestness of the movie becomes a cinematic equivalent of that video of celebrities all over the world singing “Imagine.” There’s a line — a joke? It seems uncertain — where Cliff Beasts 6 is described as a movie to “make the world forget all their problems,” even as The Bubble, knowingly or not, constantly points towards these problems, hand-waving them away with something approaching or trying to be comedy.

That’s one of the things that makes The Bubble so frustrating to watch. Not just the fact that it’s bad, and that the jokes don’t land (it is, and they don’t), but that there’s almost something here. On paper, this cast is great, but nobody seems to know what film they’re actually in. There’s something almost cruel about the reveal that plays out over the end credits: a Heart of Darkness style documentary about the disastrous making of Cliff Beasts 6, which in many ways shows what The Bubble could have been, especially if it were interested in some kind of meaningful Hollywood satire. It doesn’t seem at all interested in the impact of COVID — in the real world or the film industry — and the pandemic seems only to be a handy setting for bizarre comic escalations, including a security firm that shoots off an actress’ fingers, a mole planted to befriend a TikTok influencer, and a reference to Videodrome that’s as jarring for its cinematic literacy as much as for its potential horror. The Bubble both is and isn’t many things: it’s a pandemic film that doesn’t care about the pandemic; a satire that’s too nice, and a comedy that isn’t funny.