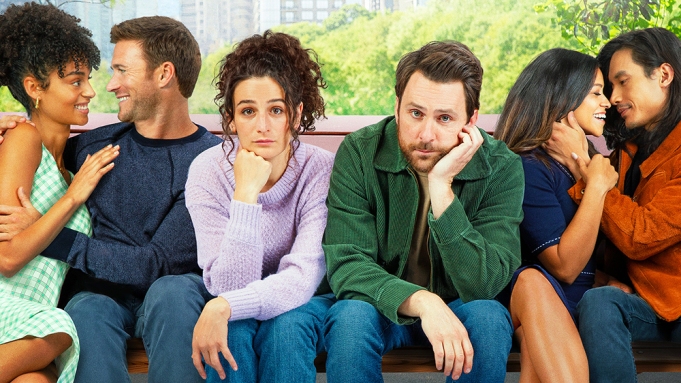 Scott Eastwood is the third-billed actor in Amazon’s new romcom, I Want You Back, and almost everything about the writing and directing of the film suggests that it is exactly Scott Eastwood’s speed. It is bland, superficial, forgettable, and mostly predictable (and also about 15 minutes too long). It’s a diluted combination of Nora Ephron and Cameron Crowe, right down to a final scene that feels like a cringe-y rip-off of the last moment in Singles.

What elevates it, however, are Charlie Day and Jenny Slate, but not just their presence. It’s the fact that two actors one might expect to be in the “best friend” roles have been made the leads while the more traditional leads, Eastwood and Gina Rodriguez, play the supporting actors. By casting Slate and Day in the leads, the romcom emphasizes the comedy, and in doing so, gives us all the more reason to love their characters, which ultimately makes their romance all the more potent. It’s a good trick if you can get the likes of Charlie Day and Jenny Slate to star in your movie.

Jason Orley, who also directed Pete Davidson’s best starring role in a feature film, so far (Big Time Adolescence) directs I Want You Back, about Peter (Day) and Emma (Slate), who meet each other crying in the stairwell of their shared office building after they’re dumped by their respective partners, Anne (Rodriguez) and Noah (Eastwood). The two platonically bond over their shared misery, and after several nights of drinking and commiserating, the two hatch a plan to get their respective partners back. Emma will break up Anne and her new boyfriend, Logan (Manny Jacinto), by seducing him, and Peter will befriend Noah and try to convince him that he should leave his new girlfriend, Ginny (Clark Backo), and go back to his ex.

As the romcom gods have ordained, the two hatching the plan fall in love with each other, although there are a number of difficulties — mostly predictable, some unforeseen — along the way.

I Want You Back works to the extent that it does because there are some genuinely funny moments, including one joyous sequence that involves Pete Davidson, Isabel May, a hot tub, and an unexpectedly delightful cameo from Ben McKenzie (and if you want to feel old, note that he plays the father of a teenager in the movie). I’d like to say that Scott Eastwood is also an unexpected delight, but he’s not: He’s like a watered-down Hemsworth brother with all the charisma of a dirty foot. Gina Rodriguez doesn’t leave much of an impression, either, while Manny Jacinto is largely reduced to eye candy (not that anyone is complaining).

There are a lot of sitcom trappings here. The screenwriters Elizabeth Berger and Isaac Aptaker run How I Met Your Father, and I Want You Back could’ve easily been as bland as the Hulu sitcom without the comedic talents of Slate and Day. They play off of one another brilliantly, not only in the comedic sense as we’d expect but also as potential romantic partners. The film coasts on their charms and only gets bogged down when it’s invariably forced to pull them apart and center the storyline on the other couples, and it never quite regains its momentum as it plods along toward its inevitable conclusion. But for fans of Day, Slate, and romcoms, I Want You Back is a solid if unspectacular entry that makes for a perfectly serviceable streaming option for Valentine’s Day, or any other lazy night on the couch.

I Want You Back is currently streaming on Amazon Prime Video.