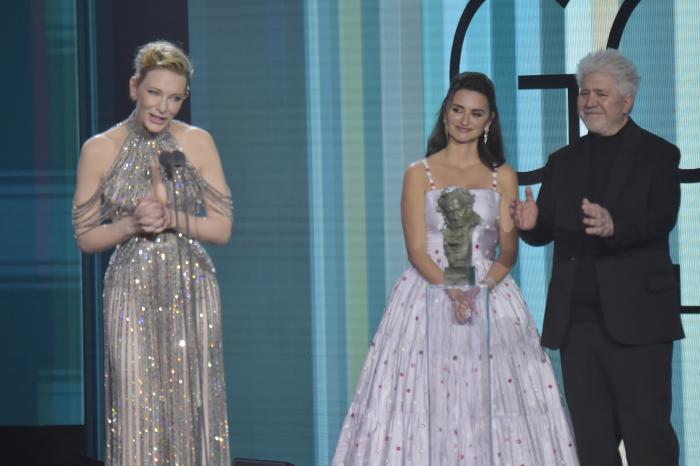 I am here to right a historical wrong. This is history in the making because for the first time in the history of English-language online pop culture websites, I will cover the fashion of something other than the US’ awards season’s red carpets. Yes, it’s about time someone did something to break the cultural chokehold awards ceremonies in the US and UK have over fashion moments! I mean, sure, there’s the film festivals of Cannes and Venice and San Sebastián and Berlin … but tell me something, who do the camera flashes inevitably turn to? That’s right, Hollywood stars, one or two French icons, and Penélope Cruz with Javier Bardem. It’s time to turn the tide, it’s time to show Hollywood just how fashionable other star systems can get, sometimes with less resources!

So, I’m turning this ship around and heading straight to … the red carpet of a European, first world country… With a robust fashion scene and a direct pipeline to designers in France and Italy … and also starring Penélope Cruz and Javier Bardem … and guest-starring Cate Blanchett.

Whatever. Let’s break new ground and check the coolest looks from the Spanish Academy, the 36th Goya Awards!

What’s that? What do you mean Tom & Lorenzo and the GoFugYourself gals have covered the Goya’s before, numerous times?

Oh crap, do I have to actually review the fashion now? Because I was planning to coast on just showing the lewks and writing different combinations of the word DAMN, but now that I know actual fashion bloggers have written about the Goya’s … I’M SCREWED. Guys, I’m just a cishet brute whose fashion language only covers two categories: Thirst and cool.

Nominated for 8 Goyas, Almodóvar’s latest Madres Paralelas came out empty, but it was still another victory lap for the duo that pretty much made Spanish Cinema since the return of democracy, with two Academy Awards nominations to boot. Penélope wore a somewhat conventional but flattering Chanel, but the real standouts were her costars Milena Smit and Aitana Sánchez- Gijón, wearing couture Balmain the former and Spanish designer Roberto Diz the latter: 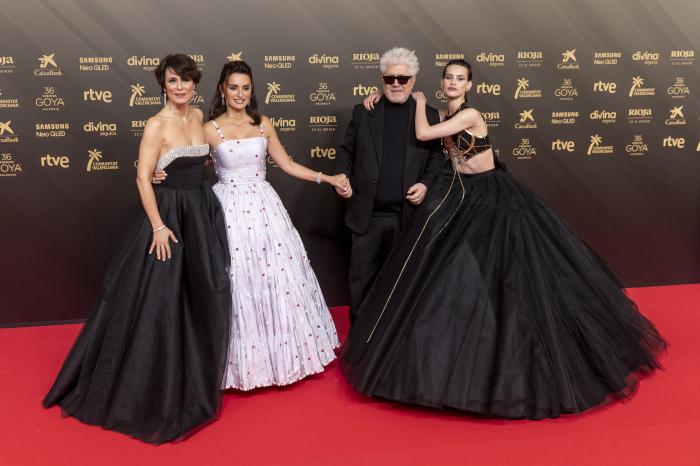 The big winners of the night were Javier Bardem and director Fernando León de Aranoa for the dark comedy The Good Boss, bringing home Best Movie, Director, Screenplay and Lead Actor. Bardem’s fashion wasn’t much to talk about, because for that we have the following category: 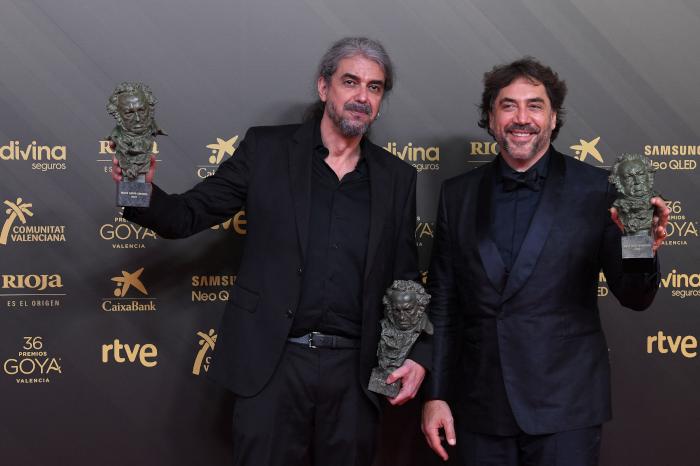 Look, men’s fashion has a long way to go because it’s really, really hard to fail at a suit & tie and the colors black and white. So whenever cis men take fashion risks or transgender nonconforming, male-presenting people shake things up, well, that will always get a cool from me, even if I’m not a fan of the execution.

The winner of this category was actor and rising director Eduardo Casanova, whose movie Skins you can find on Netflix. Just look at this rad custom dress from Man’s Concept Wear: 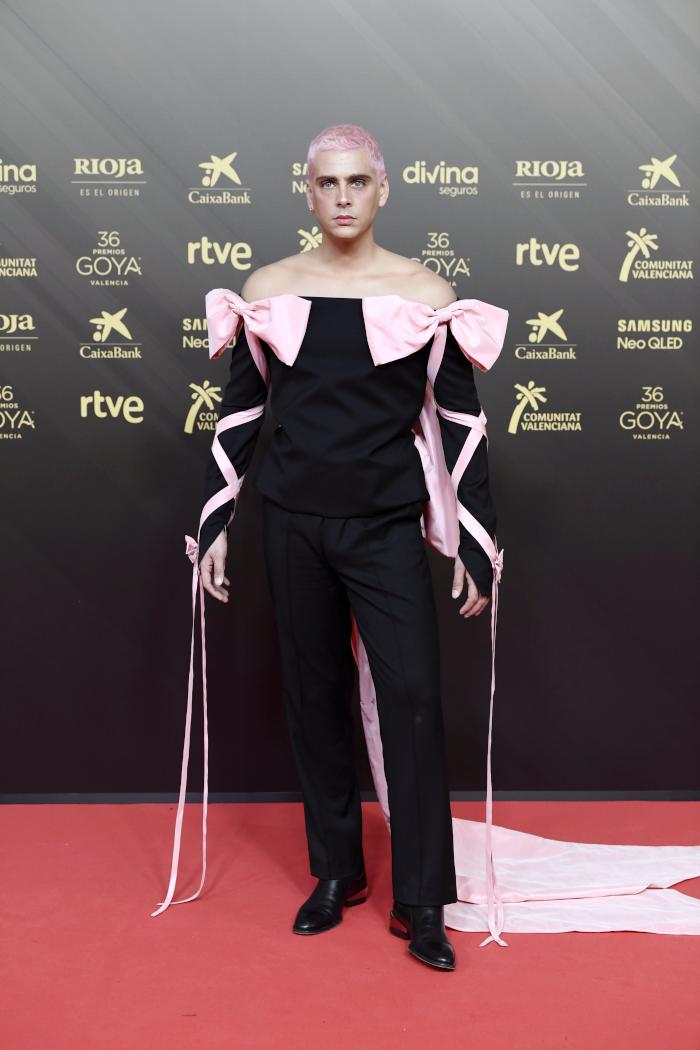 I’m not a huge fan of the ruffles … thingies, and if you’re going to have a cape, commit to it. But still, impeccable serve.

In the category of “things I might dare to actually wear,” there’s the nominee for Best New Actor Jorge Motos, wearing Palomo:

The one problem with all these examples of gorgeous, gender-defying fashion? They are made for skinny guys with perfect and sot jawlines, not for those who are bulky and have jawlines that proudly show the high degree of Neanderthal coursing through their genes, like Javier Bardem himself… or me.

The award for Best New Actor was won by Chechu Salgado, from Las Leyes de la Frontera/Outlaws (available on Netflix), who rocked this Hugo Boss dark-burgundy suit, perfect for the fashion-pussyfooters among us:

But my favorites were the members of Derby Motoreta’s Burrito Kachimba, who were nominated for the title song of Las Leyes de la Frontera. They won’t acknowledge the late 70s are over and they are right to do so: 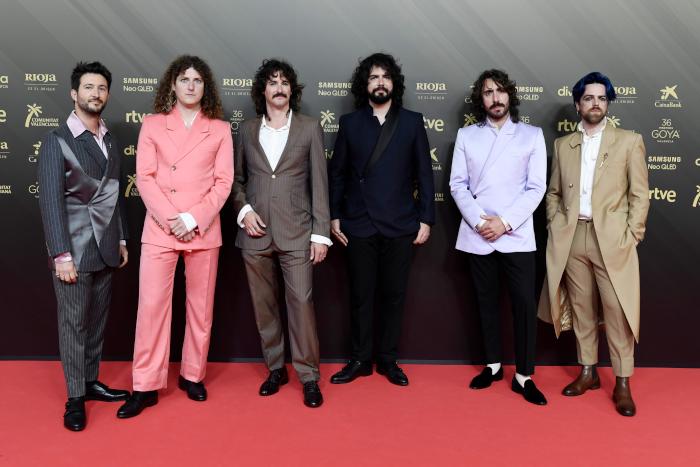 The women who won the night.

With that out of the way, like Saoirse Ronan as Jo March said once, women: first we start with Spanish legend Blanca Portillo, wearing Jorge Redondo, winning her first Goya after four nominations for Maixabel, based on the real-life meeting between an ETA terrorist and the widow of one of his victims. The movie and her performance look terrific by the way, adding to a wave of acclaimed productions based on the Basque conflict.

María Cerezuela, also for Maixabel, won for Best New Actress wearing Jone González. I dig the sleeves in contrast with the sober-glitter of the rest of the dress.

The little movie that could was Libertad, a story of friendship, coming of age and class struggle between a Spanish girl and the daughter of her Colombian domestic worker. Its young director, Clara Roquet (wearing Teresa Helbig), won Best New Director and Nora Navas won Best Supporting Actress, serving one of my favorite lewks of the night by Herve Moreau: 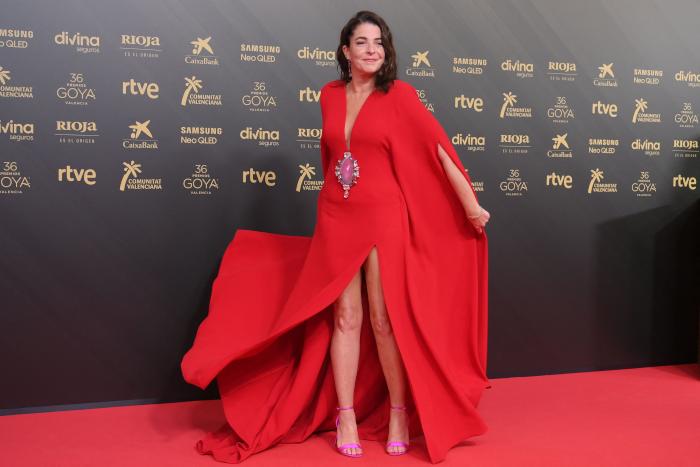 Cantaora Maria Jose Llergo won Best Song, “Te espera el mar” for Mediterráneo, about the refugee crisis. She wore Revegelion which … sorry, I’ll never be a fan of ruffled skirts. But the jewelry, makeup and hair were on point. 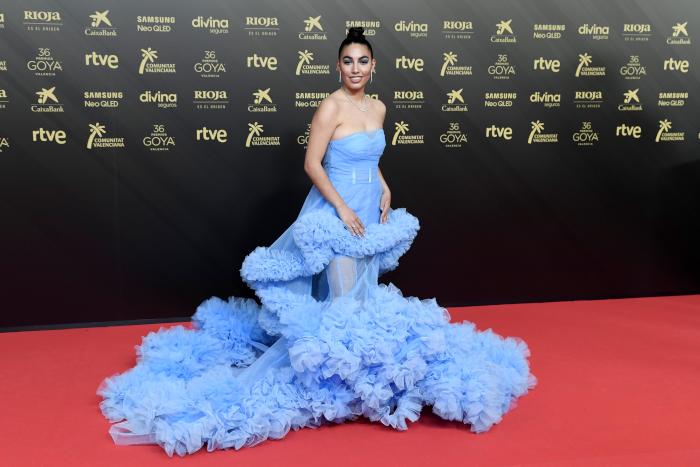 Another legend and classic Almodóvar muse, Ángela Molina, came in looking like a Queen:

And now, the thirst please (respectfully)

A sign of well-rounded person is their ability to thirst after someone without objectifying them. Then again, as Tim Minchin once sung, give us 5 minutes. 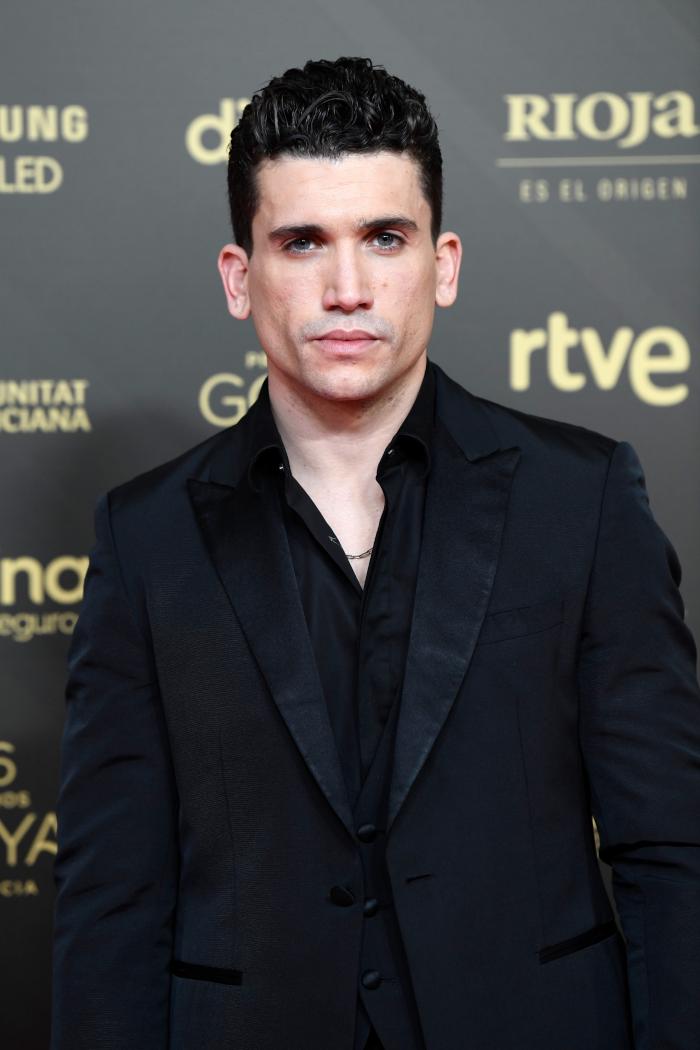 Mina El-Hammani, from Elite, wearing a white Fendi tunic that is, somehow, form-fitting and, you know, a tunic: 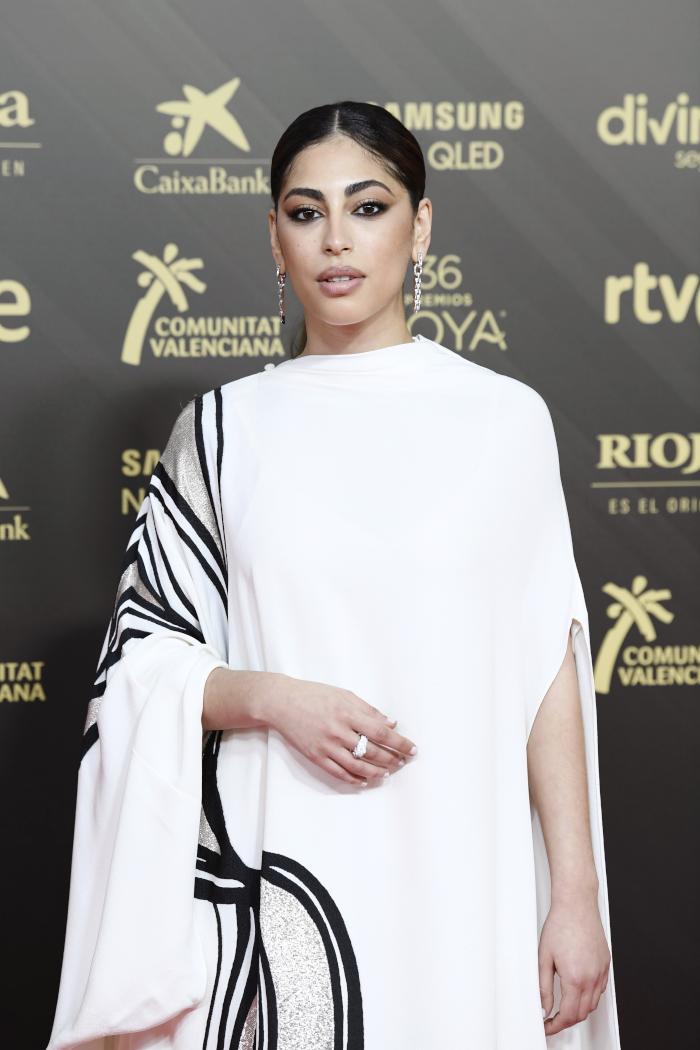 And finally, in the “this better not awaken anything in me” category, we have Bárbara Lennie, who starred in The Mess You Leave Behind and Everybody Knows, personally attacking me in Gucci: 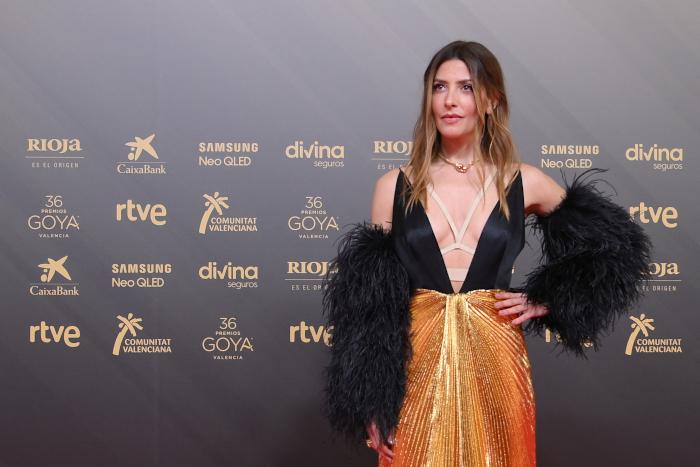 How could I if I want to keep a job writing about film and pop culture on the internet?

Cate was there to receive the Goya’s first International Award, something that has become more common in international film academies, I guess for clout’s sake? Well, at least Cate has the Continental cred to back up her appearance, but it also helped promote her upcoming film with Pedro Almodóvar, his English-language debut. Cate wore Armani, as usual, but my favorite was an Armani suit she wore earlier on Saturday for a press conference.

See you on March for the César Awards.